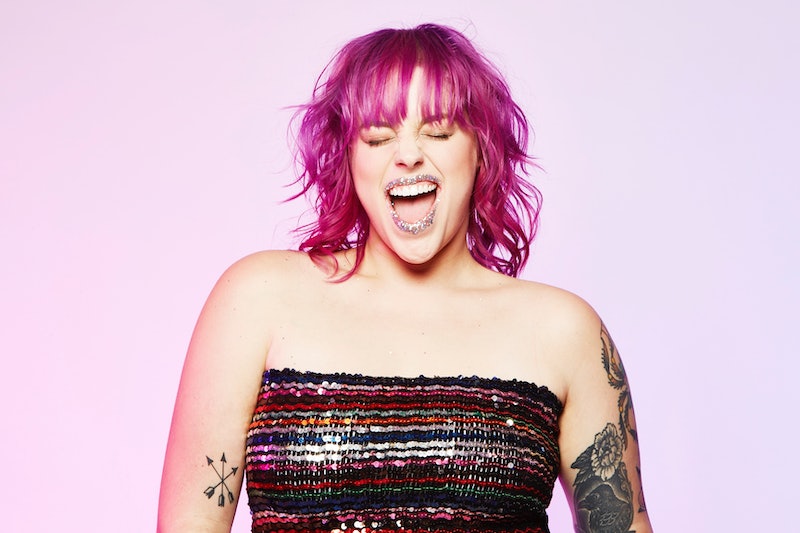 At my parents' house, there's a stack of small old diaries in the nightstand drawer of my childhood bedroom that I flip through every year when I visit for Christmas. I know that what I'm going to read will make the back of my knees sweat, but I peruse through the battered pages anyway, looking over all the messy bullet points outlining my New Year's resolutions for the last decade. There isn't a single year where I don't pledge to work out more and eat a healthier diet.

Nearly half the country does the same every time the year comes to a close. In 2015, surveys by the University of Scranton showed that 45 percent of Americans made New Year's resolutions, and 37 percent of these individuals resolved to "stay fit and healthy." In a survey of 822 Bustle readers, 41 percent resolved to lose weight or exercise more in 2017. That's why gym memberships nearly double in January and everyone at the office is stocking salads in the fridge after the holiday season has ended. We get caught up in a frenzy of self improvement, and apparently, for many, self improvement means weight loss.

This year, when I looked back at my notebooks, I did more than just read the words I had scribbled. I transported myself back to the days when I wrote those entries and asked my younger self what I was actually trying to accomplish. And I admitted to myself that, all those years, what I really wanted wasn't to be healthier or take better care of myself in some general sense — what I'd honestly wanted was to to lose weight. To be thinner. To fit into that pair of skinny jeans I bought in 2012 that I could never pull up over my thighs.

When I stepped back to think about my own true intention behind goals like "eat better" and "get fitter," it made me wonder what society really wants from us when it encourages us to "go to the gym more often" and "eat healthier food," and what we want from ourselves when we resolve to do so. Are we just using coded language to talk about losing weight and going on diets? What do those New Year's resolutions really mean?

In a Gallup poll conducted last year, 49 percent of Americans said they would like to lose weight. That number has come down from 62 percent in 2004, but still, that means half of our country isn't happy with what they see in the mirror. The desire to shed pounds is especially prevalent among young women. Forty percent of elementary school girls in the U.K. say they want to lose weight, while 63 percent of 14 and 15-year-olds say the same. In America, 42 percent of girls between first and third grade want to be thinner.

This follows us into adulthood. Ninety percent of teenagers diet on the regular, and at any given time, about half of the women in the U.S. are on a diet. It's no wonder that, in 2015, the number-one New Year's resolution was simply to "lose weight" according to the University of Scranton. There's no way to sugarcoat it. It seems that most of us want to be thinner.

Bonnie Brennan, Eating Recovery Center Senior Clinical Director of Adult Residential and Partial Hospital Services, believes these New Year's resolutions are driving us to focus on our physical appearance in an unhealthy way. "For most people, resolutions are about losing weight and striving to be thinner," Brennan tells Bustle. "After the 'binge' of the holidays meals and drinks comes the onslaught of diet and exercise plans that promise to 'get you back on track' or 'give yourself the gift of a new you.'"

Indeed, the transition we make out of the holiday season always seems to be marked with instructions from experts and actors alike, in magazines and advertisements, on how to create a new, fitter version of ourselves. The messages are guilt-inducing, even passive-aggressive, and a lot of times, they work. When those colorful ads pop up on my computer screen asking if I feel like becoming the Healthiest! version of myself today, I furiously roll my eyes in frustration. Yet — and here's the trouble — I simultaneously believe, even if only briefly, that I would be so much happier if I only picked up those pink hand weights pictured next to that lean woman and lifted my way to better arms.

As someone who has battled with binge eating disorder (BED) for the last decade, for me, the most disconcerting part of these New Year's resolutions is how much they can encourage me to alter my eating habits in a negative way. I'm convinced I'll be a healthier, more disciplined person if I could just eat less or detox more. Brennan says these are "all behaviors in which eating disorders thrive," which is why I used to find myself bingeing at the end of every January, like clockwork, and then living with the guilt for weeks after.

Many other people, whether or not they have suffered from an eating disorder in the past, have experienced a diet-based resolution gone awry. Megan Grant, a 27-year-old fellow Bustle writer, tells me she used to inadvertently associate "getting healthy" with giving yourself a makeover. She would "vow to eat way, way less" every New Year, as well as exercise much more than necessary. "I wanted so badly to be thinner. I was so adamant about it," she says. "Of course, this never ended well. And when it didn't, I'd be even angrier with myself." It was all ostensibly to be "healthier" — but clearly, it was anything but.

The anger and shame that follows these so-called failures make us feel lousy, to say the least. Only eight percent of us actually achieve the New Year's resolutions we set out for ourselves, so there are quite a few who have to face defeat. In turn, we judge ourselves harshly for not succeeding, which only drives us to engage in more destructive behaviors, such as binge eating or drinking.

According to Tiffany Cruikshank, L.Ac, MAOM, founder of Yoga Medicine and YogaGlo instructor, this "turns out to be an endless cycle of ups and downs for the body, as well as takes a toll on our emotional health and body image." Therefore, when her patients express an interest in shedding pounds, Cruikshank suggests they actually "shift their goals from losing weight to getting healthy" — rather than just using achieving healthiness as coded language for losing weight.

Sure, exercising and eating a balanced diet falls under the umbrella of living a healthy lifestyle, but when we shift our focus away from the physical appearance, Cruikshank says we can change our outlook in a positive way and thus get closer to fulfilling our aspirations.

Rarely does mainstream society inspire us to look inside when New Year's resolutions are upon us. Success and reinvention is measured externally, by the softness of our skin, the brightness of our hair, and the size of our dress. Annie Robinson, M.S., wellness coach and co-founder of Pause Breathe and Connect, thinks this is precisely what causes so much disappointment.

"Resolutions like 'eating better' and 'getting more fit' actually perpetuate feelings of not being good enough, not being thin enough, not being beautiful enough," Robinson tells Bustle. We become convinced that we have to change in order for the next year to be a fulfilling one — because we're falling short at this very moment.

That certainly sounds familiar. It's reported that 91 percent of women are unhappy with the way their bodies currently look, which is what leads to all the dieting. As painful as it is to acknowledge (and to admit in a public forum), there's a small part of me that thinks life will be much more enjoyable if I could just shed the extra layer of fat around my legs and waistline. When Robinson works with clients who struggle with similar insecurities, she suggests they "dive deeper [and] identify what is motivating them." What is it really that we're looking for? To feel more loved? To feel more comfortable in the body we've got? To feel noticed and respected?

These questions force us to turn inward and figure out what really makes us thrive. Rather than jumping on the bandwagon of the typical New Year's resolutions, Brennan recommends you consider what your deepest values are, which she defines as "things you feel are important to you in your heart, things that require no explanation in your head." Once you pick out a couple values that are most significant to you, you can start piecing together what your goals for this next year will be.

I took Brennan's advice. I recently sat down to think about what 2017 would look like if it were going to be a mind-blowing year (or, at the very least, a stark improvement from what 2016 offered). On the most basic level, I knew I wanted to get dressed in the morning without any shame about how the fabrics fell on my body. I also wanted to be able to interact with the people around me with more confidence, to develop more compassion for myself and others, and just relax more often so I could have some damn fun.

Renewing my membership at a gym and shrinking the size of my thighs definitely wasn't going to assist in achieving any of these goals, because the things that helped me feel most at ease with my body in the past had nothing to do with fitness or diet. Meditation and yoga have always been the most useful tools when it comes to managing my eating habits and practicing self-acceptance, so I've decided to focus more on those practices rather than worrying about my appearance.

I renewed my membership with the on-the-go yoga and meditation app YogaGlo, which used help me manage my anxiety and feel calmer throughout the day. It allows me to take classes with instructors like Cruikshank at any given time, so I have no excuse about scheduling matters. I vowed to make a few other changes that would help me focus inward, like staying away from social media in the morning and only turning on the TV when there was something specific I wanted to watch. The less I filled my brain with what the media wanted me to believe about weight loss, the better. For the first time, I've made New Year's resolutions that aren't focused on my physique, and I'm more optimistic about what the next year holds than I ever was.

It's also necessary to point out that there's nothing wrong with wanting to exercise more or eat less junk food — rather, it's the intention behind these resolutions that matters. Instead of "motivating ourselves from a place of inadequacy or insecurity," as Cruikshank says, let's start by appreciating the bodies we woke up with this morning. Then, from there, we can inquire as to what we need in order to move into the new year feeling like the most confident, badass version of ourselves.

More like this
Cheap But Want To Give Nice Gifts? Check Out These Black Friday Sales Up To 60% Off
By BDG Commerce
Amazing Bargain Finds For Your Home On Amazon That Are Worth Way More Than They Cost
By Sara Brown-Rigoli
These Are The Under-The-Radar Fashion & Beauty Black Friday Deals You Don't Want To Miss
By BDG Commerce
How Is The British Royal Family Related To The Romanovs?
By Karen Fratti
Get Even More From Bustle — Sign Up For The Newsletter