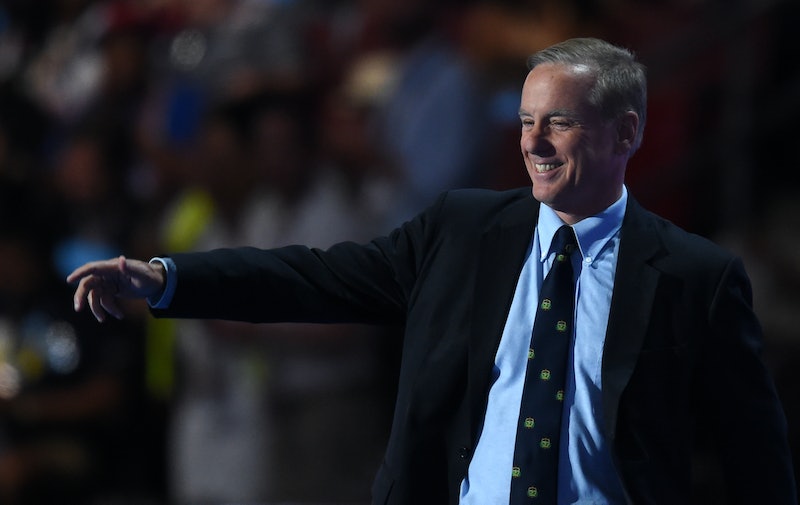 And then there were three. The first candidate to formally join the Democratic leadership race has withdrawn from the election. Howard Dean dropped from the Democratic National Committee chair race Friday, leaving Minnesota Rep. Keith Ellison — the favorite of some influential party members — with no obvious challenge.

Dean announced his decision to withdraw from the race Friday in a pre-recorded video message played at a meeting of the Association of State Democratic Chairs in Denver. "I am not going to be a candidate for the Democratic National Committee chairmanship," NBC News reports Dean said in the five-minute video. "I have other priorities; I have a grandchild now." The former DNC chair reportedly spoke at length about the immense time commitment the job of DNC chair required.

In an interview with MSNBC on Friday, Dean said he'd made the decision to drop "two or three weeks ago" because he didn't want to see the party's leadership race turn into a proxy battle between supporters of Hillary Clinton and Sen. Bernie Sanders. "I really feel strongly that our party needs to turn itself over to the next generation," Dean said. "I just think that one of the problems that we had in this election was we got to connect more with young people, and that means not having faces like mine. I really do think this needs to go to a younger person [so we can] move ourselves on to the next generation."

Dean had served as DNC chair from 2005 to 2009 and was largely credited for creating the foundation needed to make then-Sen. Barack Obama's 2008 presidential bid a success through his "50 state strategy." Although Dean refrained from endorsing a candidate at the time of his withdrawal, his comments regarding how much time and energy the job chairman requires appeared to be a criticism of Ellison, who currently serves as a member of Congress.

Ellison entered the race for DNC chair with an impressive list of early endorsements roughly four days after Dean announced his intention to run Nov. 10. Ellison has been endorsed by Sen. Bernie Sanders, Sen. Elizabeth Warren, Senate Minority Leader Harry Reid, and incoming Senate Minority Leader Chuck Schumer, giving him support from both progressive and mainstream Democrats. Yet some, including Dean, have questioned whether a sitting politician will be able to dedicate enough time to the DNC leadership position.

In an effort to address those concerns, Ellison said Friday he was considering leaving his congressional seat if elected to head the DNC. "Though I love being in Congress because it allows me to serve my neighbors, I do think that it is more important to build, strengthen the DNC," the Washington Post reported Ellison said at the Denver conference of the Association of State Democratic Chairs, before adding he would continue to mull over the idea.

Former Maryland Gov. Martin O'Malley, who said he was "taking a hard look" at the DNC chair race after losing the party's presidential primary, ultimately opted not to run. While Ellison has been seen as the favorite, there are reports that some of President Barack Obama's advisers are encouraging Labor Secretary Thomas Perez to join the race.