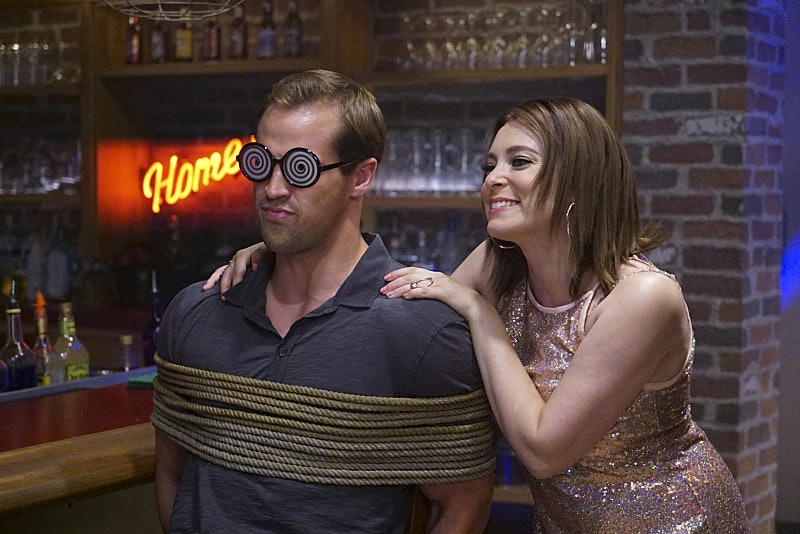 It seems that ridiculous twists of fate refuse to quit on Crazy Ex-Girlfriend. Friday night's episode featured a surprise return in the form of Trent, Rebecca's former Harvard classmate who once tried to woo her before getting unceremoniously booted out of her life. While Trent's Crazy Ex-Girlfriend revival was a surprise, his appearance in Friday's episode served as the primary example of why friendships cannot be forced. It was a teaching moment for everyone involved and Trent was the perfect, albeit cheesy and creepy, example.

Despite his well-meant eagerness, Trent's intense efforts that he put into ingratiating himself with Josh and his friends was actually pretty disastrous. If spending over $10,000 on surfing gear wasn't enough of a clue that he was overdoing it, then Trent should have gotten the hint when he stalked Josh at his workplace, made plans with Josh, and then proceeded to be borderline creepy when he hung out with the all the guys at Home Base, knocking back beers and trying to talk sports. Not only was Trent trying to earn Josh's friendship so that he could (somehow) get back to Rebecca, he was forcing himself to live up to a kind of hyper-masculine standard of friendship that is regularly upheld in society. In essence, Trent was forcing himself into a box and it only led to a disastrous end. This pattern of forcing relationships for a romanticized, unrealistic goal would color the rest of the episode.

After Trent totally creeped out Hector and White Josh during the group hang out, he got a pep talk from the salesgirl who he met while buying the surfing gear. Once he revealed that this hare-brained scheme to force a friendship was part of a plan to make Rebecca fall in love with him, the salesgirl urged him to just to go Rebecca's house and proclaim his love once and for all. Bolstered, Trent did exactly that. As expected, the plan went horribly wrong. He freaked Rebecca out, repelled her even further (even though they did end up having sex later in the episode), and his thesis that friendships could be forced despite faking it was proven to be deeply false once and for all.

Trent's journey of redemption, however misguided it may be, ran parallel with Rebecca's own journey to bring together all of her friends — Valencia, Heather, and Paula — even though it was glaringly obvious that the three women barely got along. While Trent may have gone about securing the approval of his peers in a ethically and morally sticky manner, he was a rather harmless and somewhat charming addition to Friday's episode.

More like this
What’s New On Netflix: A Victoria Justice Rom-Com & The Return Of David Letterman
By Arya Roshanian
What’s New On Netflix: The Return Of 'Bling Empire' & A Rebel Wilson Comedy
By Arya Roshanian
Kanye Walked Out Of Kim's 'SNL' Monologue Because Of These 2 Words
By Jake Viswanath
Penn Badgley & Leighton Meester Met On A Horror Movie Set Before 'Gossip Girl'
By Jake Viswanath
Get Even More From Bustle — Sign Up For The Newsletter