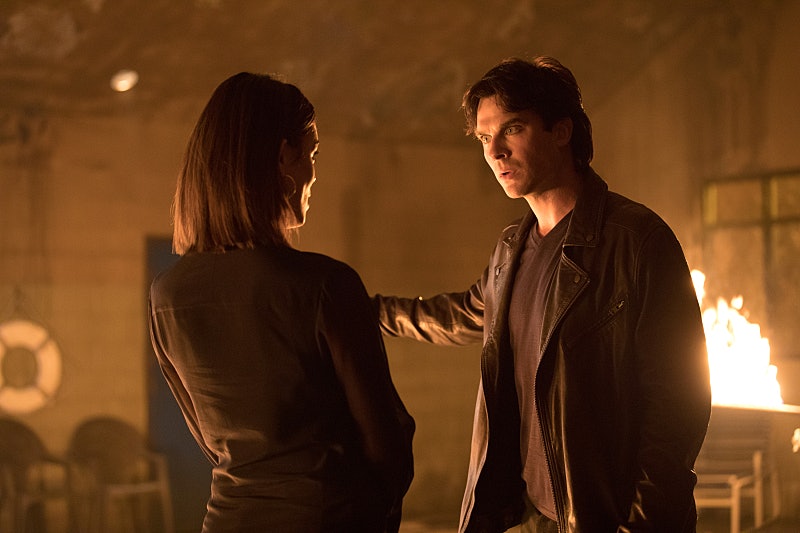 Tensions were running high for Alaric this week on The Vampire Diaries. What dad wouldn't be stressed when a siren working for the devil kidnaps your twin girls? In "Detoured on Some Random Backwoods Path to Hell," a stressed Alaric, it turns out, was a pretty angry Alaric. While they were looking for their kids, Alaric yelled at Caroline, blaming her for everything, saying that darkness follows vampires everywhere, and threatening to take the twins away from her. After they got their girls back from Seline, Alaric apologized, but his anger was still there. So, when Matt suggested they go find Damon, he agreed so enthusiastically that he staked Damon in the heart. But, is Damon really dead on The Vampire Diaries ?

At the end of the episode, Alaric seemed pretty determined to kill Damon — an idea I'm pretty sure came from Matt, who is still suffering from the loss of Tyler. Regardless of whose idea it was, it was definitely a pretty foolish one considering the fact that Damon had just sacrificed himself to Cade to save his twins, something Alaric didn't seem to know. In his rage, Alaric staked Damon in the heart, and the last moment of the episode was Damon desiccating — normally a sign of death for a vampire.

So, things aren't exactly looking good for Damon right now. But, take heart my fellow Vampire Diaries fans! If Damon is dead, he's not staying dead for long. In the promo for next week's episode, Damon is very much alive. If Damon really is alive, as the promo suggests, then one of two things happened: either 1) Alaric staked him with some magical object that will put him to sleep and not kill him, or 2) thanks to his deal with Cade, Damon is now even more immortal than he already was. However he escapes death this time, you can bet he's not going to be quick to forgive his old BFF for driving a stake into his heart.

More like this
Penn Badgley & Leighton Meester Met On A Horror Movie Set Before 'Gossip Girl'
By Jake Viswanath
50 Years After Creating Her Alter Ego, Angelyne Is Still Driving That Pink Convertible
By Gretchen Smail
'Atlanta' Season 4 Could Be Here Sooner Than You Think
By Kadin Burnett
Conversations With Friends' Endometriosis Scenes Are As Brutal As It Gets
By Ivana Rihter
Get Even More From Bustle — Sign Up For The Newsletter