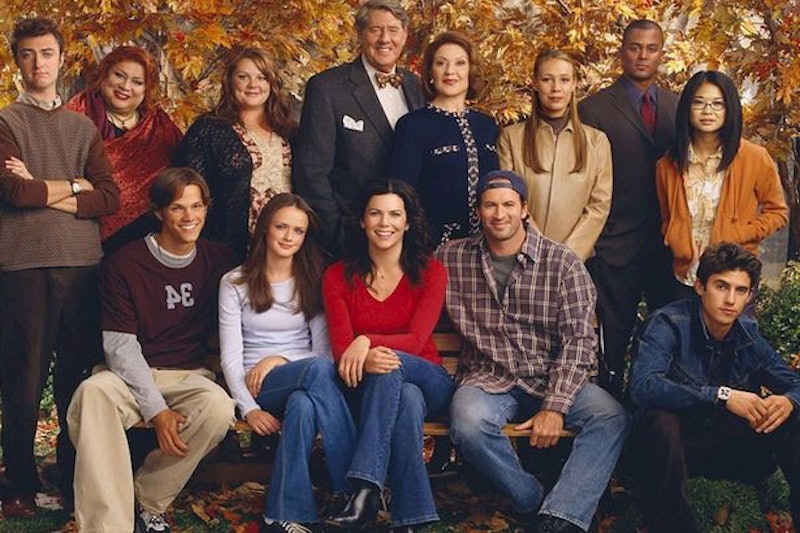 I have Rory's next headline for the Stars Hollow Gazette: Former Town Selectman Jackson Belville Has Most Popular Name Of The Year. HelloGiggles spotted Jackson's latest claim to fame on the recently released 2016 list of most popular baby names for boys, and sure, it is probably a coincidence, but in the year of Gilmore Girls, at least a couple of those kids had to be named for the vegetable-loving Mr. Belville. Jackson is a good, strong name, after all, and it is most famously attached to a man who wears pajamas with his own face printed all over them. Naming your child after Jackson is sure to give him confidence and the greenest of green thumbs.

Jackson would love the notoriety of being the Stars Hollow citizen with the most coveted name — at least at first. Given how prone Jackson is to retreating from too much responsibility, he and Sookie are likely to move further out into the woods if Jackson feels he is not setting the right example for all the little Jacksons to follow. Honestly, this special nod could not have happened to a nicer guy. Imagine if Kirk had landed in the number one spot, he definitely would have found a way to turn the popularity of his name into a new business venture.

While Jackson wins bragging rights in Stars Hollow for earning the top spot on the baby name list, he is not the only Gilmore guy who inspired expectant parents this year. The illustrious Mr. Huntzberger nabbed the number 18 spot, ensuring there will be plenty of Logans in the world for years to come, while Luke's name came in at number 22. Sadly, only one of the Gilmore women cracked the top 25 on the girls side of things, with Emily claiming her rightful spot at number 14 on the list.

With Gilmore Girls only gaining in popularity thanks to the revival, I expect the 2017 lists to look like a who's who of Stars Hollow residents. I would never want to dethrone Jackson, but prospective parents should not restrict themselves to just four Gilmore Girls characters. Make 2017 the year of Lorelai, people — or at least help Jess surpass Logan. Here are just a few equally amazing Gilmore Girls names you should consider if you have a bundle of joy coming your way in 2017.

Come on, you totally want your daughter to be the reigning Lorelai. She'll be a fast-talking, pop culture-loving, coffee addict by the time she's 5, and you will love every minute of it.

It is time for Babette to make a come back. Bonus points if you have twins and name the other one Patty.

Michel is totally underrated as a boy's name, and just imagine how much fun it will be to introduce him to his TV namesake when he gets older.

Not only is it unisex, but it comes attached to a fictional character who loves books, magic, and growing into a well-rounded human being.

If you want to go with a member of the Life and Death Brigade, then go with Finn. He wasn't just Rory's favorite, he was pretty much everyone else's.

Sure, you will have to answer the question Hilton or Geller a lot, but that's just a great way to meet new mom friends. Meanwhile, your daughter is named after one of the strongest female characters to ever appear on TV. Everybody wins.

Let Jackson have his moment for now (this should definitely give him grand marshal rights for the next Stars Hollow parade), but remember, 2017 can have even more Gilmore Girls goodness if you ditch the baby name book and look to Stars Hollow for inspiration instead.