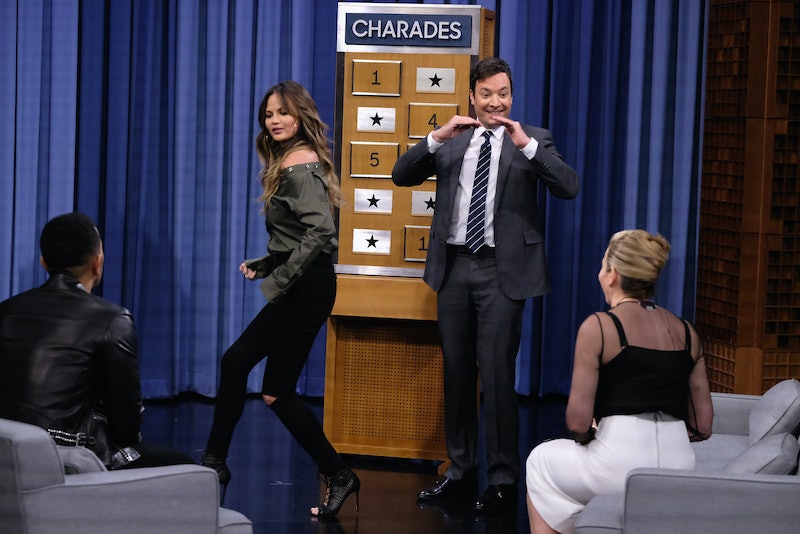 Though she apparently wasn't expecting to appear on TV that night, Chrissy Teigen joined John Legend to play charades on The Tonight Show Starring Jimmy Fallon on Friday. The celebrity couple squared off against Fallon and Chelsea Handler. Baby Luna should be proud of her parents, who were the clear victors of the evening. It really wasn't a fair competition; Teigen and Legend's nearly flawless performance made it clear that this wasn't their first game of charades.

Legend and Teigen, for those who for whatever reason aren't following their every move, got married in 2013 and had their first child in the spring of 2016. When they're not busy acting and making music in Legend's case, or modeling and hosting Lip-Sync Battle in Teigen's, they have hilarious Twitter interactions, fight for important causes together, and are generally adorable in public outings. Their latest Tonight Show appearance is further proof that they are the most #goals-worthy couple currently out there.

This isn't to say that the Tonight Show appearance was without a few hitches. When Legend tried to get Teigen to guess The Little Mermaid, Teigen noticed that her husband's fly was down. However, Legend was able to guess Teigen's "Shake, Rattle, and Roll" much faster than Fallon could guess Handler's Singin' In The Rain. While Legend didn't guess Teigen's adorable attempt to act out The Girl On The Train before time ran out, he did eventually get there, which is more than we can say for Fallon.

You can tell that the other two talkshow hosts thought their opponents were a little too good at the party game, and I think it's because Legend and Teigen have played together quite a few times before. While Handler seemed confused when Fallon lifted up four fingers at the beginning of their round, usually used to signal a four-word phrase in charades, Legend and Teigen had the motions down. The couple knew to mimic a movie reel to signify guessing a movie title, and they were almost eerily fast at guessing.

Obviously, they are simpatico because they are a couple, but I also believe that Teigen and Legend have played quite a few party games in their day. And if so, I'm not at all surprised.