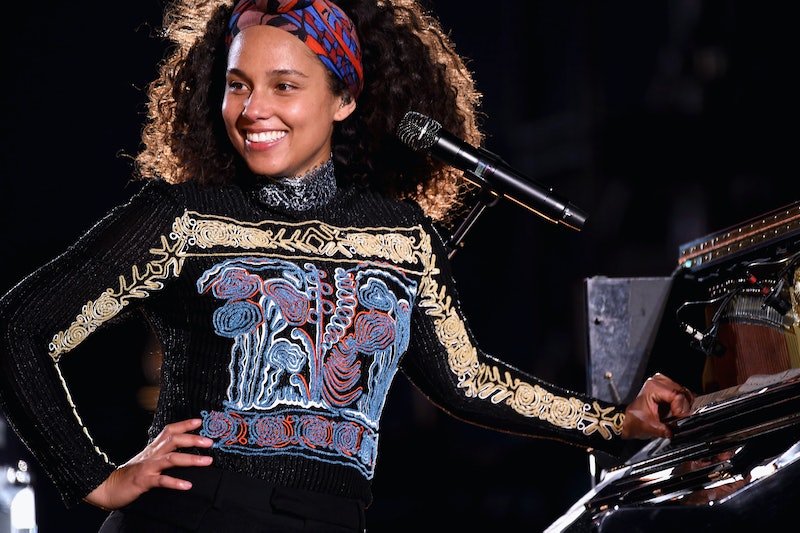 As tensions mount to fever pitch between protestors and U.S. law enforcement in Standing Rock over the Dakota Access Pipeline, there's been a growing outcry those across the nation for President Obama to take executive action and stop construction immediately. This plea has leapt from up from social media and into the mainstream discourse, first with Van Jones' appearance on Chelsea , and now, with hundreds of musicians, including notable activist Alicia Keys, signing a letter for the POTUS to honor their request for cessation of pipeline construction.

The letter was the brainchild of musician Kate Nash, who told Noisey, "I want to write a letter for musicians to sign, expressing how disturbed they are by the police actions taking place at Standing Rock. We as the music community should not support the police there. We should take a stand." Nash's words were made into action when her letter to Obama was signed by more than 100 musicians, including Keys, Sia, Billie Joe Armstrong of Green Day, Annie Lennox, Karen O, Hayley Williams of Paramore, and Mark Ronson.

Keys is no stranger to voicing her feelings on pressing social issues. Her announcement to stop wearing makeup to rediscover herself and her active support to give aid to refugees seeking asylum are just two of the causes Keys holds close to her heart. In supporting the protestors of the Dakota Access Pipeline, Keys has proven once again that she is not as concerned with the trappings of fame as she is about those causes that deeply affect the people around her and the world she lives in.

For those who are currently unaware of the current conflict over the Dakota Access Pipeline, these protests have been going on for the majority of 2016. The clash is primarily between the Standing Rock Sioux Tribe, whose sacred, protected, ancestral lands are threatened by destruction from the pipeline, and Energy Transfer Partners, the company overseeing the construction of the pipeline. The project developers believe the pipeline "is the safest, most cost-effective and environmentally responsible way to move crude oil, removing dependency on rails and trucks," according to CNN. As time has marched on, the Standing Rock Sioux Tribe has gathered support from every Native-American nation in the U.S., along with various climate change activists and social justice advocates.

It's even more heartening to see that Nash and Keys were joined in such great force to deliver a letter to Obama, the Department of Justice, and the Army Corps of Engineers that would mean victory for so many Native-American nations. As much as it should not be required for celebrities to lend their voices to a movement, charity, or social justice issue in order for it to be heard or honored, as a supporter of #NoDAPL I'm grateful that these musicians have put their fame to a functional use.

More like this
Celebrities & President Biden Are Enraged By The Leaked Roe v. Wade Decision
By Alyssa Lapid
President Zelensky Spoke Out On Ukraine's Chances Of Hosting Eurovision Next Year
By Sam Ramsden
Twitter Was Saying The Same Thing About Sam Ryder’s Surprising Eurovision Result
By El Hunt
Yomi Adegoke On The Offline Diaries & The Power Of Representation
By Jessica Morgan
Get Even More From Bustle — Sign Up For The Newsletter