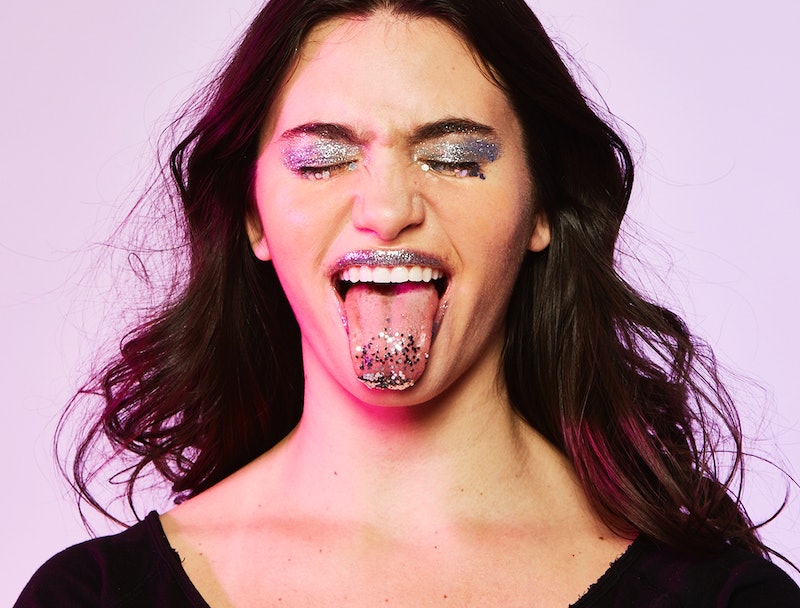 I don't know about you, but I'm approaching the end of 2016 with mixed emotions. On one hand, it's been a rough year for virtually everyone, and I'm looking forward to a fresh start in 2017.. On the other, the end of 2016 signals the end of President Barack Obama's administration — and the beginning of President-elect Donald Trump's leadership in 2017. With that in mind, what's a feminist to do? Well, you can start by considering taking on some resolutions that are perfect for Nasty Women everywhere in the coming year.

In case you were too busy building the blanket burrito that will be your home for the next four years and aren't totally sure what I mean by "Nasty Women," allow me to explain where the term came from. During the final presidential debate between Trump and Democatic nominee Hillary Clinton, the then-Republican nominee interrupted Clinton during her speaking time to call her a "nasty woman." Because the internet can be a wonderful place at times, Clinton's supporters immediately claimed the insult for themselves. Rather than something derogatory, "nasty woman" has now come to stand for solidarity. What woman hasn't been disrespected and insulted by men during her lifetime for simply speaking her mind and standing up for her beliefs?

In 2017, that solidarity will undoubtedly be more important than ever. So, it's important we all come together to make the world a better, and safer place for us all. Here are a few ways to help make that happen.

Call out discrimination when you see it. Ignoring it just perpetuates the cycle of sexism and misogyny.

Although Clinton isn't the president-elect, there are a number of other female politicians working to make a difference in Washington. Women deserve better representation in the government, and it's enormously important to support those who make it to political office. Fortunately, there's some good news: As the Washington Post pointed out, the number of women in Congress stayed roughly the same after the 2016 election, but those who did get elected are "more diverse than ever."

The wage gap is well documented, so I won't spend too much time explaining it here. (The short version is that women make far less than men for the same amount of work, and this disparity varies drastically by ethnicity.) The gap is due to a variety of factors, but one way to fight it is by asking for a raise this year. If you don't demand equal compensation for your work, who will?

Not long after the election, Last Week Tonight host John Oliver asked his viewers not to become complacent during Trump's time in office: "Giving him a chance in the sense of not speaking out immediately against policies he’s proposed is dangerous because some of them are alarming," he explained in a Last Week Tonight segment. To that end, don't ignore the news just because it's depressing. Keep up with the news — ignoring the changes made by Trump's administration will just allow them to normalize.

In 2010, a study found that women apologize far more often than men — not because men refuse to apologize, but simply because they're less likely to think they did something wrong. Of course, you probably didn't need a study to tell you this, but that doesn't make it any easier to quit the habit. If there was ever a time to stop apologizing unnecessarily, though, it's the first year of Trump's presidency.

Earlier in 2016, a study supported something most women likely already knew: When women and men work together, men often receive the credit. In 2017, don't let your contributions be ignored or attributed to other people.

Become a clinic escort, volunteer, write to your local representatives — do whatever you can to protect women's rights choose. The next four years are going to be tough for women's healthcare, but there's plenty you can do to help protect abortion access in your area.

Trump's treatment of Clinton during the presidential debates — the name-calling, the constant interruptions — was an extreme example of what virtually every woman faces throughout her life. "Manterruptions" were discussed at length in 2015, starting with an op-ed in the New York Times explaining that no, it's not all in women's imaginations. So, what's a Nasty Woman to do? Refuse to be interrupted, and help other women who are being interrupted themselves.

The masterful expression of judgment. The disbelieving smirk. The eyebrow raise. The tacit invitation to, "please, explain your (inferior) thought process before I tell you why I'm not gonna take your bullsh*it." After enduring decades of mansplaining, Clinton's judge-y face became an art — learn from it so you, too, can cause sexists to shiver when you meet their gaze in 2017.

If you're still in school, there's guaranteed to be a feminist action group you can join. If there isn't, start one.

Did you know Clinton wasn't actually the first woman to run for president? That would be Victoria Woodhull, who campaigned for the presidency in 1872, before women could even vote. Take 2017 as an opportunity to brush up on your feminist history.

If you have the extra cash, donate to women's rights groups like the National Organization for Women, or the League of Women Voters.

It's important for all women to support other women.

If you were too young to vote in this year's election, make sure to register as soon as you can.

Finally, remember to take care of yourself. It's going to be a rough few years, but I'll leave you with words from the OG Nasty Woman, Clinton's, concession speech in Nov. 2016: "I know we have still not shattered that highest and hardest glass ceiling, but someday, someone will, and hopefully sooner than we might think right now."