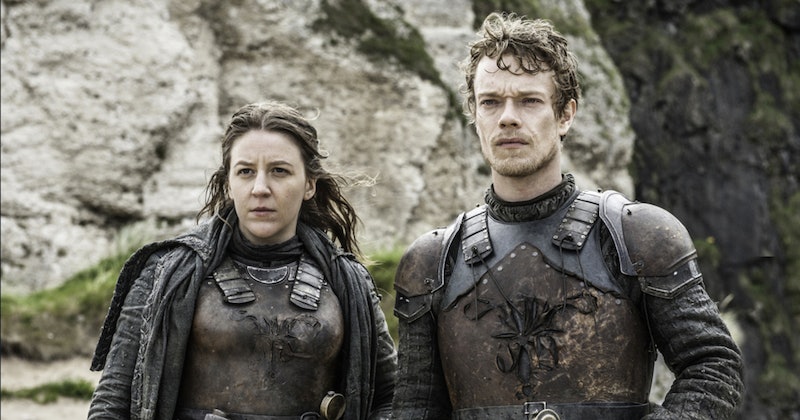 It has been a long, torture-filled road for Theon Greyjoy, but Season 7 of Game of Thrones may finally be the year Theon gets his groove back. When the series began, Theon was a confident, cocky, and driven boy with a need to prove himself, first to the Starks and then to his father. Once Theon fell into the hands of Ramsay his entire world fell apart leaving him a shattered shell of a man. According to Game of Thrones fan site Watchers on The Wall, Theon is set for another transformation in Season 7, and it is about time.

Alfie Allen appeared at Malta India Fan Con where he spoke to the crowd about what is ahead for Theon in the coming season. In true Game of Thrones actor fashion, Allen kept his answers as vague as possible, but he did talk about Theon's state of mind. "Skittish and full of fear…," Allen said of Theon's mental state. "Basically, and then that can kind of, I guess, evolve into rage, which you might see…who knows?"

Rage? It has been a long time since Theon raged at anything. Even when he escaped Winterfell with Sansa, Theon was far too broken to express anger. If anything, he was resigned to the idea he would end up back with Ramsay before Brienne showed up just in time to keep Theon and Sansa safe. Even after he was reunited with his sister Yara, Theon continued to keep his emotions contained. After years of torture, it only makes sense Theon would retreat inside himself, but the prospect of seeing him shed the final remnants of Reek for good is something worth getting excited over.

Theon is now part of Daenerys' crew, and it is hard not to feel inspired when you are following the Mother of Dragons. There are rumors of an epic sea battle between Daenerys' vast army and Euron Greyjoy, Theon and Yara's uncle. While he hasn't played a major role in the show yet, book readers know Euron is a monster on par with Ramsay. Confronting his uncle could be the tipping point for Theon. Now that he has his freedom back there is no way Theon is going to put up with another cruel bully. Euron may be the trigger that unleashes all of the pent up rage lurking beneath Theon's fear, confusion, and humiliation.

If it is Euron who reawakens Theon's inner kraken, then the scene will be nothing short of epic. Allen has proven himself to be a versatile actor, and it has been a long time since he was given a chance to channel Theon's anger. I want nothing more than to see Theon find a new purpose now that he has a second chance at life, but in order for that to happen he has to rediscover his inner fight.

Of course, Euron is not the only contentious figure Theon could encounter in Season 7. Rumors of a meeting between the Dragon Queen and the newly minted King in the North, Jon Snow, have been swirling for months. Jon and Theon have a complex history. They both loved Robb and saw him as a brother, but Theon betrayed Robb. That is something Jon may not be able to forgive. These two men are destined to clash when they meet again, despite Theon helping Sansa escape Winterfell.

After he saved Sansa, Theon's role on the show felt complete. He had found a small sense of redemption, but there was little hope he could recover from the emotional damage of his time with Ramsay. Allen has offered up a glimmer of hope that the show is not done with Theon yet. Theon still has a chance to play a major role in the story's final chapters and I cannot wait to see who he becomes next.