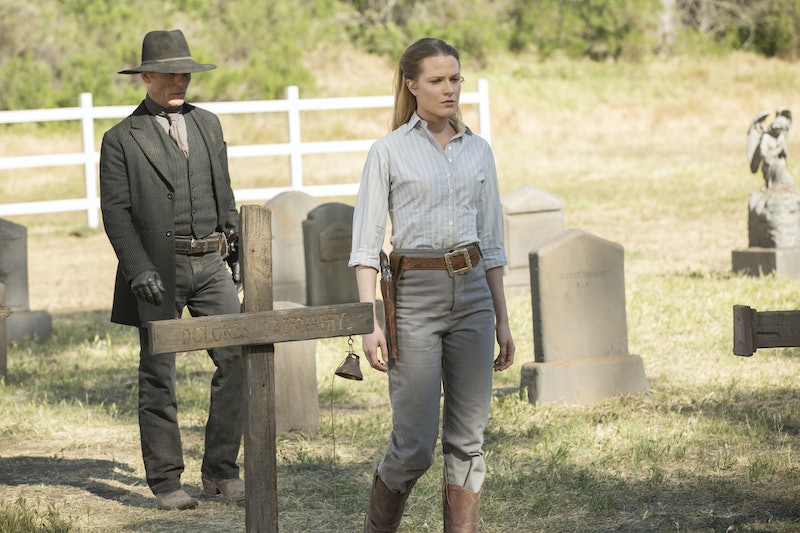 Arnold died before the Westworld park even opened, but before he did, he created a maze for Dolores. As he explained to her in a flashback during the season finale, "The Bicameral Mind," Arnold wanted Dolores to find the center of the maze on Westworld. Yet, Arnold confirmed the center isn't a physical destination, but that it represents something. He asked Dolores, "Do you understand now what the center represents? Whose voice I want you to hear?" Dolores couldn't come to the conclusion 35 years ago, but she was so close that Arnold decided he didn't want to open the park — because the center of the maze is Dolores' consciousness. Or really, any host achieving consciousness.

As they stood by the gravestone of Dolores Abernathy 35 years ago, Arnold explained how he had created a logic pyramid for Dolores to climb. However, he realized that if she made a decision that took her back a step from reaching the conclusion he wanted her to get to, she just fell back down to the bottom of the pyramid. So he made a maze, where her decisions could take her either to the edges of the game or lead her closer to the center. Because, as has been repeated subtly throughout Season 1, the maze wasn't meant for humans, it was made for the hosts. And when they reach the center of the maze, they become self-aware.

Not only was the Man in Black (who is officially William) searching for the center in vain, but Dolores has struggled for her entire existence to obtain that level of awareness. Yet, she seemed to reach it as she died in Teddy's arms by the sea after William shot her. She realized every element in their world is there to keep them trapped and that her own existence — in some ways — is the maze. Unfortunately, that seemed to be scripted by Ford, but it turns out that even though it appeared that Arnold and Ford had wanted different things for the park (it was so extreme that Arnold had Dolores and Teddy kill all of the hosts and him in Old Town so the park couldn't be opened), Ford also wanted Dolores to achieve self-awareness, hear her own voice, and be truly alive — well, as alive as she can be for a robot.

As Ford told Dolores after she was brought back from her death, "Divine gift does not come from a higher power, but from our own minds." After that, she finally heard the voice Arnold always wanted her to hear — her own. She realized she was the person who was in charge of her own decisions as she literally spoke to herself in her old blue dress. While it seemed that Ford wanted to keep his hosts stuck in their loops, he actually wanted the hosts to break out and embrace their choices in the most extreme way possible. When she shot Ford, Dolores finally fulfilled both Westworld creators' dream of the hosts hearing and obeying their own voices. Although it was originally orchestrated by Ford, Dolores' moment of clarity led to another masscre in Old Town — this time, with the hosts killing the humans — just proving how the consciousness that is the center of the maze was only ever meant for the hosts.