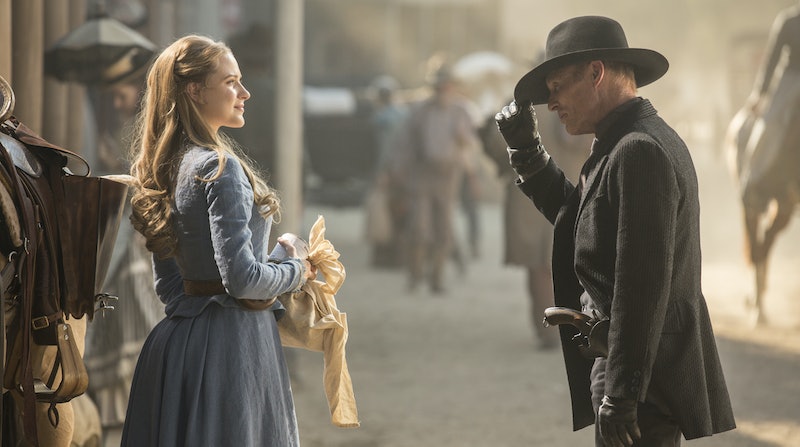 Dolores and the Man in Black want to reach the center of it and Maeve has already been there, so what exactly is the maze on Westworld? Throughout Season 1, Dolores has been listening to Arnold lead her to the center, but as the Nov. 27 episode, "The Well-Tempered Clavier," showed, his voice is an old memory that Dolores has been following. Even if you don't believe in the William and the Man in the Black theory, there's no denying that Westworld is playing with multiple timelines, so Dolores had been instructed by Arnold to follow the maze 35 years ago when the park was created. However, as Dolores might be at the center of the maze, along with the Man in Black, at the church in present time, we may just get some clarity on what the maze really means during the Season 1 finale on Dec. 4.

Arnold (real Arnold, not Bernard host Arnold) told Dolores — presumably 35 years ago — about the maze. When she asked about it, Arnold said, "It's a very special kind of game, Dolores. The goal is to find the center of it. If you can do that, then maybe you can be free." Later in the series, after the Man in Black killed Maeve and her daughter, he said that Maeve refused to die and that, "She was alive, truly alive, if only for a moment." When the dying Maeve fell with her daughter in her arms, the maze quite literally revealed itself to the Man in Black as she collapsed at the center of a drawn maze in the ground.

This information about the maze has led to theories that the center of the maze is not necessarily a physical place, but a state of mind where a person might find his or her purpose, like Julianne Escobedo Shepherd for Jezebel's The Muse wrote. This is backed up by Teddy stating, "The maze itself is the sum of a man's life. The choices he makes, the dreams he hangs onto."

So let's assume that the maze is a state of mind where you are free of anyone's control. That helps explain how Maeve has never recovered from the experience of seeing her daughter die — her awareness level has never been able to go completely back to being a submissive host.

But another theory about the maze that could be the key to the entire Season 1 of Westworld is about Dolores and Wyatt. The Man in Black was told that Wyatt was at the center of the maze and I've already established that Dolores was told by Arnold 35 years ago to go to the center of the maze — and this might not be a coincidence. Although Wyatt hasn't been shown in the Man in Black's present timeline, Teddy remembers how Wyatt went missing and came back with some strange ideas. He also said that Wyatt claimed he could hear the voice of God (the voice of Arnold perhaps??) and convinced Teddy to help him kill everyone in the Old Town — the very area of Westworld that Ford just resurrected for his new narrative . . . hmmm.

The theory that many people have speculated about, including Vanity Fair's Joanna Robinson, is that what Teddy is remembering about Wyatt is what actually occurred in the park 35 years ago and that it was Dolores who killed the hosts at Old Town — meaning, she is the mythical person Wyatt that Ford added to the narrative. Since Dolores saw flashbacks of herself pointing a gun to her head after looking at the massacred town, perhaps it was Arnold's intention for Dolores to destroy Westworld when she got to the center of the maze all those years ago. He could have programmed her to be free of Ford's controls at the center of the maze, and perhaps made it possible for her to even kill a human.

As Dolores just remembered she killed Arnold, maybe she killed him during the Old Town massacre when she was in the center of the maze. If death is Arnold's view of total freedom, then you can see how that would be the end of his maze game for not only Dolores, but for himself.

Of course, the Man in Black meeting up with Dolores and being killed by her is more profound if Ed Harris' character does turn out to be William. It would mean that he visited Westworld 30 years ago, fell in love with Dolores, but then went back to his normal life and his fiancé. He has returned to Westworld as an older man, seeking death and then finds it in the very host that he cared about all those years ago. However, as Ford has been tinkering with the Old Town narrative by bringing it back, what Arnold intended — and what the Man in Black desires — could be lost. Either way, we're getting some sort of Dolores-Man in Black showdown in the Season 1 finale.

While it seems that I've diverged from what the maze means, the beauty of Westworld is that all of these theories and stories appear to be intertwined and the more complicated the narrative, the bigger the payoff. And even if you don't believe Dolores is Wyatt or that William is the Man in Black, we might all be able to agree that the maze started as a creation of Arnold's where the rules of the regular Westworld game do not apply and we may just see what the means in the Season 1 finale.