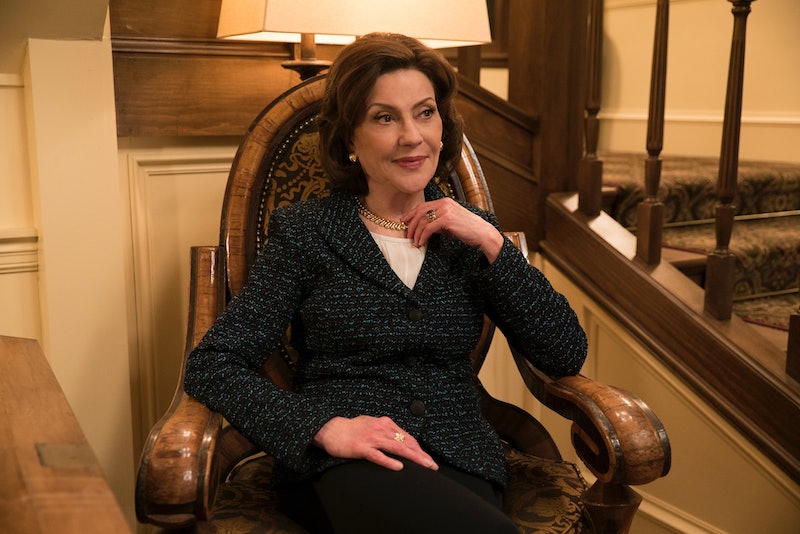 Like pretty much every Gilmore Girls devotee, I have a whole lot of feelings and opinions about Netflix's revival, A Year In The Life . My biggest disappointment was that, 10 years after her graduation from Yale, Rory hadn't exhibited much growth or evolution as a character — and, like many viewers, I quickly ran out of patience with the character who had been a role model during my tween and teen years. But, luckily another Gilmore stepped in and emerged as the revival's true star. In a twist that I never expected, I thought that Emily's story arc in the Gilmore Girls revival was the most compelling.

I fully anticipated that it would be heartbreaking to watch Gilmore Girls without Richard — and it definitely didn't feel like the same show without his presence at Friday night dinners and other family affairs. I've always thought that Emily doesn't get enough credit for being an amazing character, but she really outdid herself in the revival as she navigated the painful aftermath of Richard's sudden death. I definitely wish the circumstances were different — but her evolution as a character after this heartbreaking event was inspiring to watch, because it lead to a feminist awakening for Emily.

Don't get me wrong, Emily was always an independent and assertive character and Richard certainly wasn't a controlling husband who prevented her from following her passions. Emily's involvement with the DAR and similar organizations seemed to genuinely make her feel happy and fulfilled in the show's initial run — but, as she proved in the revival, sometimes we reevaluate our priorities and decide it's time to follow a new path. This isn't an especially groundbreaking move for women in their 20s and 30s, but Emily proved that there's no wrong age to make some major lifestyle changes — and that's such an important message.

Sure, the path wasn't smooth — getting rid of all her possessions on a whim probably wasn't the greatest idea. (Although I think we should take a moment to appreciate the fact that she rocked a Candie's t-shirt and jeans while doing so.) But, Richard's death put things into perspective for Emily — and one major realization was that she no longer had common ground with her fellow DAR members. Instead of quietly withdrawing from the group, she delivered one of the revival's best scenes when she dropped some major truth bombs on an unsuspecting applicant. Hearing Emily curse repeatedly was basically the stuff of dreams and it totally made up for some of the revival's less exciting scenes.

But, Emily's most empowering moment arguably came when she decided to start a new life in Nantucket. As she told Lorelai, she'd never been in charge of buying a house before and even her credit cards still read "Mrs. Richard Gilmore." Although Richard is still constantly in her thoughts (raise your hand if you cried when she placed a kiss on his portrait before she went to bed in "Fall"), Emily knows that she still has a life to live and Hartford isn't the right place for her anymore. It was inspiring to see her be so proactive and move to a new home where she'll feel happy and fulfilled. Plus, the Nantucket Whaling Museum gained the best docent ever when Emily joined their team — so I think we can rest assured that she'll find plenty of ways to keep herself busy.

A Year In The Life was all about major life changes — but I thought Emily's arc was the most compelling because she proved it's never too late to adjust your lifestyle. Money certainly wasn't a concern, so she could have rested on her laurels in Hartford and not done much of anything — but we all know that's not Emily's style. And, her ability to make these positive changes within a year of Richard's unexpected death illustrates just how strong and independent she really is.

Although I really wish Richard had been in the revival, showrunners handled his death beautifully — and Emily's transformation was a major highlight of A Year In The Life.