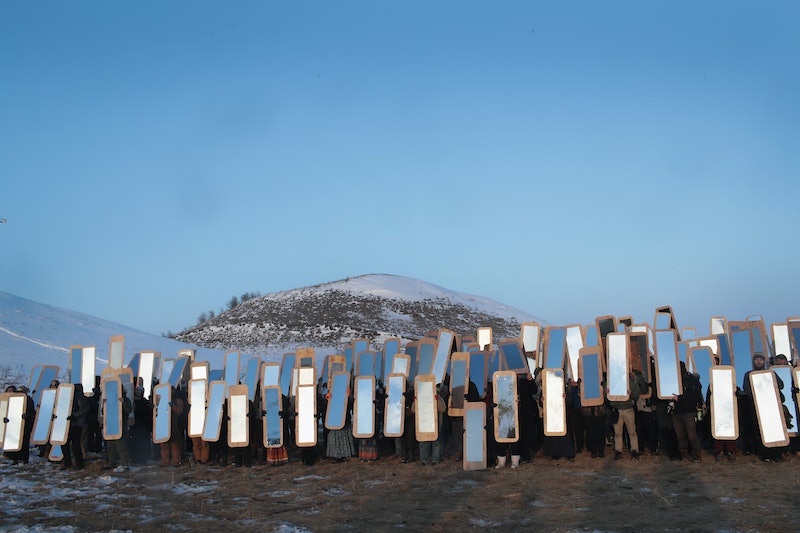 The protestors at Standing Rock may have won the battle, but they haven't won the war — at least, not yet. While much of the news has been celebratory ever since the announcement that the pipeline's construction would be halted for now, there are still photos from Standing Rock showing that the protestors aren't going away just yet.

They definitely face an uphill battle, what with president-elect Donald Trump's support for the Dakota Access Pipeline, an issue on which he agrees with the Republican-controlled legislature. Many environmental surveys will now ensue in order to determine a new, more suitable path for the pipeline, and each of those new routes will also have to take indigenous rights, sacred lands, and archeological artifacts into account.

In short, there's still going to be a lot of discussion, and it's exceedingly likely that the protestors haven't entirely succeeded in reaching their aim just yet. On the bright side, though, they know it, and Standing Rock won't be left alone just yet. People will still be there standing up for their rights and the rights of their communities until the war is won. These picture are just a slice to show you that there's still a healthy dose of determination behind all of that celebration.

This is victory, defiance, and determination all rolled into one gesture, multiplied across many people.

Bernie onesie or no, this guy isn't giving up.

3. There's Still A Lot To Defend

When you have that as your goal, you know you're not giving up.

It's an inspiring thing to see people united behind a common cause.

5. Standing Rock As A Beginning

Now that more of the world is awake, presumably it's clear that there's a lot of work still to do.

6. The Crowds Know: They're Still Needed

Who knows what the next administration will bring — the protestors know they have to be ready.

The celebration has been such a long time coming, but the Water Protectors know that it might be short lived.

8. Temporary, But Not Coming Down

These structures may not be permanent, but that doesn't mean that they're going away.

These people aren't going to forget what they were a part of any time soon.

10. They're Got Quite A Community

Standing Rock needed a hand, and they got it. That won't end now.

11. Support Is Still Coming In

That's quite a river of lights coming in to protect the actual river.

She's certainly not going to give up any time soon.

They're still all in it for the same purpose.

Some of the protests may leave Standing Rock to go back to their own homes, but together they've started a movement, and that's not going to go away any time soon. The world is watching, and when the next round of the fight comes along, everyone will be back and ready to take part.