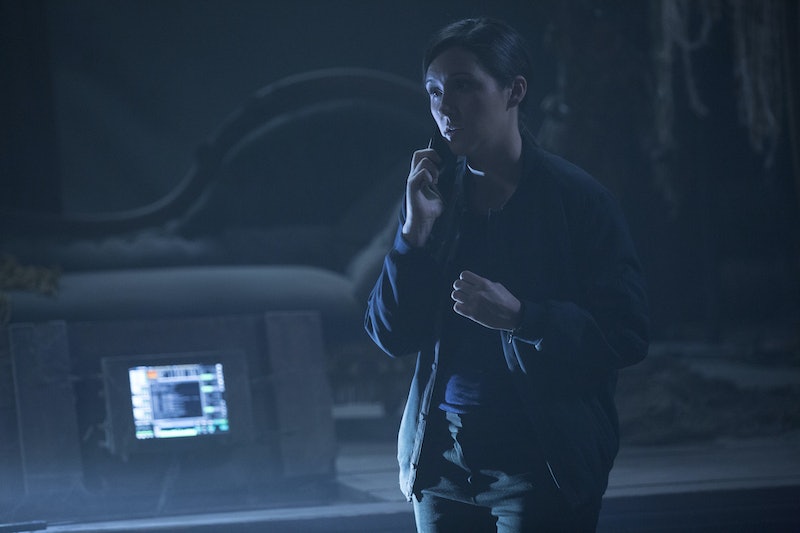 Anxious for more Westworld, and worried that we'll have to wait until 2018 for Season 2? The Internet is here to help you pass the time. In light of the Season 1 finale, the Westworld and Delos companion websites have been updated to reflect the robot revolution currently taking place. Plus, there are some Easter Eggs that hint at the fate of Elsie and Stubbs, two characters who were almost forgotten in the finale.

You'll find that the Discover Westworld site now opens with a creepy video. First, I believe that Logan taunts that "Your world was built for me. People like me." That's what he said 30 years ago. Then Dolores leans in and says "someone's gonna burn it clean to the —" before getting cut off. Then, you can start talking to the chat assistant "Aeden" again, but Aeden is not quite as friendly as before — though this isn't the first time that Aeden has glitched. Their answers indicate the chaos that's going on in the park, and reveal a few secrets that should get fans even more excited for Season 2.

Go to the Delos Incorporated site and enter "reveries" in the Admin input for a similar creepy video, followed by a bunch of scrolling code that programming wizards can easily decipher. As a bonus, if you're looking for some old content from the Delos Incorporated site, right click and select "view source." There, you can read the old flagged emails from disgruntled Delos employees, view the basic outline of Dolores' narrative loop, and look at the Mesa complex. However, as for new Easter Eggs, here are some gems from latest update on both websites.

It takes high levels of computer geekdom to find these Easter Eggs, and for that reason I am thankful for the internet. According to Heavy, there's a code at the bottom of the Delos Incorporated site that's in the computer language called hex. It translates to another code, in base64, which translates to two links with supplemental material. Are you winded? The first link is to this transmission, in which you can hear static at first, and then Elsie says "Hello?" She doesn't sound scared, or hurt. The other link leads to a tablet showing Elsie's location, pictured above. She's in Sector 20 — not far from where the Woodcutter went missing, but she was last seen in Sector 3. This is where her device was found, but the audio clip is a good sign that she is alive after all.

Stubbs May Also Be Trying To Communicate

If you talk to Aeden for long enough, no matter what you ask, a transmission will break through that looks and sounds a little like Stubbs. Are Elsie and Stubbs lost in the park together?

The Park Is, Naturally, Closed

Those people on that last train out were so fortunate.

Ford Threw That Party For A Reason

A reason that was not just to celebrate his new tragic narrative. He lead them to a chaotic massacre? So, yes, Dr. Ford really is that evil. "Some know more about this game than others" also pops up when you ask about William/The Man In Black.

What's Next For Bernard

What I find interesting about this answer is that it doesn't seem to account for Ford and his reverie programming. Still, I like the journey it sets up for Bernard in terms of self-discovery.

Was Maeve truly making an independent choice by getting off the train to find her daughter? Does she seek the cornerstone that made her human? Or, was Bernard lying about her new narrative taking her outside the park, and reverse psychology kept Maeve from escaping? This answer from Aeden, if it is meant to be taken literally, seems to suggest the latter.

Hopefully, as the wait for Season 2 lingers on, more Easter Eggs and programming puzzles will appear on these websites. Maybe we'll even get an early look at Samurai World? I can dream.