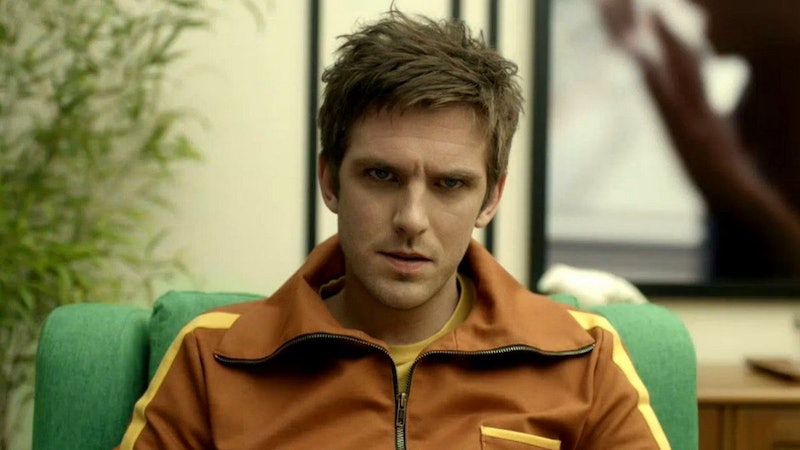 Are you still waiting for Fargo Season 3? The second season of the terrific anthology series finished its run in December 2015, and yet we reportedly won't be seeing the third iteration until sometime in spring 2017. But it turns out there's a very good reason for its delay: Fargo showrunner Noah Hawley has been pulling double-duty, also shepherding to the small screen a new drama based off a character from Marvel comics. And if the new Legion teaser trailer is any indication, the upcoming sci-fi series will more than make up for the Fargo delay — and continue TV's current hottest trend.

The new minute-long teaser, titled "Evolve," gives us our most revealing look yet at David Haller, a super-powerful mutant who goes by the pseudonym Legion. He is the son of a woman named Gabrielle Haller and none other than Charles Xavier — a.k.a. Professor X himself. Haller will be played by Dan Stevens, formerly the ill-fated Matthew Crowley of Downton Abbey, alongside a stacked cast including Jean Smart (Fargo), Aubrey Plaza (Parks And Recreation), Bill Irwin (Law & Order: SVU), Hamish Linklater (The Newsroom), and Rachel Keller (Fargo).

Although this isn't the first trailer for Legion — or even the longest — it's intriguing for the way it pulls back the curtain on what appear to be the central themes of the series. "Your whole life, people have told you you're sick," Smart's character Melanie says in the promo's first line. "I'll show you that it was really just a lie." From there, the teaser plays with the concept of reality, as characters flash in and out of existence or seemingly flicker between different versions of themselves while the world around them occasional moves backwards or explodes entirely. "I could help you rewrite the story of your life," Melanie says in another telling moment. And as the trailer builds to its climax, David leans in to Plaza's Lenny and feverishly asks, "Is this real?"

In the comics, Legion not only has incredibly strong and varied powers, but he also suffers from mental illness, including dissociative identity disorder, which manifests as multiple personalities and each of whom controls a different one of his abilities — including telepathy, pyrokinesis, super-strength, and even weirder powers like turning people into salt, belching acid gas, and punching really fast.

The trailer's focus on David's perception of reality certainly suggests that the show will be leaning heavily into the character's mental illness and examining the distinction (or lack thereof) between truth and fiction. There will probably be a lot of fan theories surrounding which characters are actually flesh-and-blood and which only exist as figments of David's imagination.

In this way, it appears that Legion will be continuing one of TV's hottest trends right now and following in the footsteps of two of 2016's most buzzed-about shows, Mr. Robot and Westworld. Those two dramas inspired some of the most heated debates and rampant speculation of any show on television this year, as both the characters on them and the fans watching them tried to figure out how much of what they were seeing was real or not.

Whether it was (spoiler alert!) Elliot Alderson re-imagining his prison cell as his mother's house, Dolores Abernathy glitching between disparate time periods, Angela Moss falling down a Lynch-ian rabbit hole, or Bernard realizing he was actually a robot, these two shows messed with our minds in a way not seen since Lost aired its finale six years ago. And there's no telling what Hawley has in store for us and what tricks Legion might be hiding up its sleeve.

Maybe it has something to do with wishing we could deny the reality of the world we find ourselves living in these days, but whatever the reason, it seems like this brain-twisting TV trope is here to stay for the foreseeable future. Get ready to have your mind blown when Legion premieres on FX on Feb. 8, 2017, at 10:00 p.m. ET.