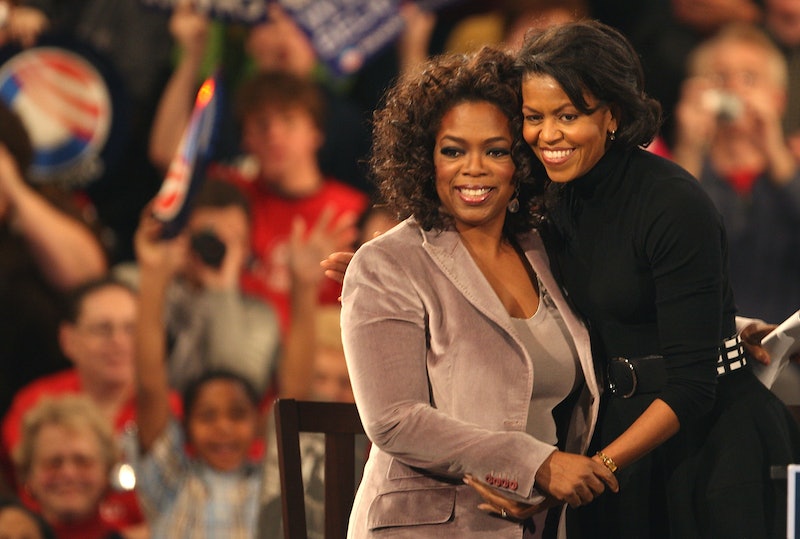 First Lady Michelle Obama is a role model many Americans can really get behind — and she's someone many hope to see run for office in 2020. She's well-spoken, well-educated, and passionate about her various campaigns. The White House just won't be the same without her dedication to women's issues. Alas, the Obamas do have to leave the White House come January. But luckily, Michelle Obama is going out in the best possible way — a one-on-one interview in the White House with Oprah Winfrey, according to Vulture. But when will Oprah's Interview with Michelle Obama air?

Vulture reports that this epic interview will air on CBS on Dec. 19 at 9 p.m. ET. This intimate chat is definitely going to delve into some fascinating issues impacting all Americans — and maybe discuss what many of us are wondering which is what Mrs. Obama plans to do post-White House (Michelle 2020, perhaps?). Oprah is the perfect choice to helm this interview, because both women are powerful and intelligent African American women, and they are also really great friends. The interview is sure to be a fantastic meeting of great minds and it could be the most inspiring chat this country has ever seen.

As reported by the New York Times, Oprah endorsed Barack Obama for president as early as 2007. After that, Oprah interviewed Michelle in 2009 for O Magazine and then both Obamas on The Oprah Winfrey Show in 2011. Then, in 2013, FLOTUS watched happily as her husband awarded Oprah the Presidential Medal of Freedom. Most recently, Oprah and Obama spoke about gender issues at the United State of Women summit. But it's not just political meetings and interview for these friends — the women also vacationed together at Oprah's Maui mansion.

Seeing MOprah (Oprelle?) together for FLOTUS' last interview as FLOTUS is the perfect way to say goodbye to the beloved spouse-of-world-leader. They prove that women, especially women of color, are influential in America and can achieve greatness. Dec. 19 will see many Americans tuning into this interview, sobbing with into their wine glasses. Better start emotionally preparing for the goodbye now, y'all.

More like this
What Is Barack Obama’s Net Worth? He Makes *Way* More Now As An Ex-President
By Hugh McIntyre
Watch Benedict Cumberbatch Lead An ‘SNL’ Medieval History Lesson On Roe v. Wade
By Grace Wehniainen
Lydia Leonard Is Setting The Record Straight
By Olivia-Anne Cleary
Twitter Is Upset About The 'American Idol' Top 3 Results: "Who TF Is Voting?"
By Jake Viswanath
Get Even More From Bustle — Sign Up For The Newsletter