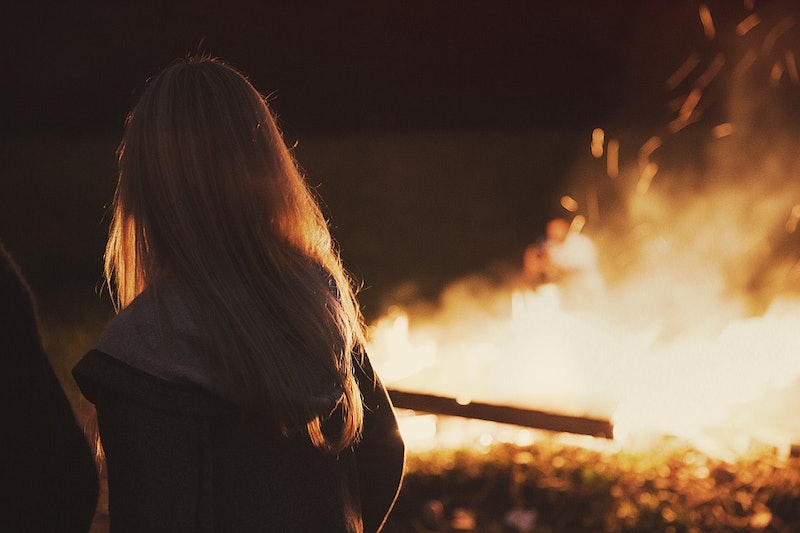 Whenever I heard stories of sexual assault, I never thought it would happen to me. Or, if I did, I assumed I would be able to recognize it immediately, like there was some rape threshold to cross. First you were a regular person, and then you were a victim; a mindset informed by made-for-TV movies and soapy young adult novels. Even my self-defense-for-women classes in high school made the succession of events seem so clear. I knew it wasn’t that simple, but that’s how it played out in my head. Hypothetically, of course.

I was sexually assaulted on the first night of orientation week and didn’t even realize it until months later. It was the first frat party I had ever been to, and I was so excited. I made the wrong choice of wearing a knit sweater instead of one of the many crop tops I had brought along, but I was still enjoying myself while mingling with my new classmates. I wanted to hook up with someone, a practice I had only recently began to explore.

At some point, I remember turning around and seeing a guy lingering on the fringes of our group of friends, cast in the red light of the strobes. In my effort to be as friendly as possible, I held out my hand to him and introduced myself. He said his name and then pulled me toward him, immediately planting his mouth against mine. It makes me feel gross now to admit it, but in that second, I felt a rush of excitement — this was what it meant to be in college, to kiss whomever I wanted. Or, to be kissed by whoever wanted me.

He picked me up and pressed me against the wall. Being manhandled should have been warning enough, but I honestly didn’t yet know how hooking up worked. Was this what it was always like? I fidgeted and giggled when his hands started roaming into my pants, right there in the middle of the party. “What’s your favorite book?” I asked, in an attempt to determine if this should go anywhere. He said Brothers Karamazov. I tried asking him more questions. He kept kissing me.

I remember my feeling as one of trying to be mildly annoyed — like, I don’t want to be fingered on the wet grass right now, but I’ll deal with it because that’s just “life” — instead of feeling actually frightened.

By now, the party was winding down: it was almost two in the morning. He suddenly scooped me up in his arms and carried me to a secluded corner. I shrieked. He laid me across a wooden table and pulled down my pants.

And it was here that for the first time I yelled, “No!” I looked around frantically to see if anyone could see my bare lower half. He started to finger me. I winced. “Please, stop,” I whispered. I don’t know how long it went on. He offered to take me into a room in the frat house — “I know a few brothers who would let me” — and I said no, no, no. When he decided he was done, and I had pulled up my pants, most people had left the party.

Now, here’s the first of many parts where, if this weren’t my story, I admit that I would question my own judgment: I needed to get home somehow, in the dark, on the South Side of Chicago. I didn’t know yet where my dorm was in relation to this frat, and there was no one who could walk me there.

I should have taken an Uber, but I didn’t want to be seen as some spoiled kid who couldn’t even find her way around. So I turned to him and asked if he would walk me home. I couldn’t comprehend the gravity of what had just happened to me. It was just a bad hookup, right?

On the way back, he kept pausing to kiss me and then tug me onto the grass to finger me again. I remember my feeling as one of trying to be mildly annoyed — like, I don’t want to be fingered on the wet grass right now, but I’ll deal with it because that’s just “life” — instead of feeling actually frightened. My vagina started to sting.

Because of all these pit stops, what should have been a 10-minute walk took 25. He stood outside my dorm and said what a long walk it would be back to his dorm. His dorm was on the other side of campus, and I remember feeling bad for “making” him walk all the way here — though looking back, it’s obvious what he expected from me after walking all that way — and so I agreed to let him inside. “But my roommate’s here,” I said. “We can’t do anything.” If I knew what I know now, maybe I would have made different decisions. But none of it was an invitation to be penetrated without my consent.

What proceeded was, like everything that had happened before, a confusing night. My roommate was throwing up in the bathroom; he actually held her hair as she did so. And then he came back to me, pulled off my pajama shorts, and started eating me out. “Stop,” I said, sort of astonished at this guy’s tirelessness. “I don’t want my roommate to see.”

I kept his number in my phone and we would occasionally text. He grinded up on me at another party. We hooked up — consensually — one more time, and that was it.

Did our consensual hookup invalidate the earlier assault? Did this make me a “victim” now? Should I be more upset?

This is why it took me so long to believe I had been sexually assaulted. Why would I agree to keep seeing him if I had been? I had been trained by stories and media about rape to believe sexual assault happened in a clear, sequential order: boy asserts himself on girl, girl fights back but is subdued, girl never wants to see boy again. I had this habit of seeing my life as a novella of sorts, and what happened to me definitely didn’t fit any narrative.

I actually didn’t think about that night again until, believe it or not, one moment that next quarter. I went over the events in my head, straightened myself up, and thought, “Oh, my God.” I had that switch of self-perception I always thought would occur, like a chemical reaction, instantaneously after the assault — only it was months later. Then I was consumed with questions about my own behavior: Did our later consensual hookup invalidate the earlier assault? Did this make me a “victim” now? Should I be more upset?

That last question stuck with me the most. I couldn’t understand why I, a person who cries at the smallest provocation, felt nothing. And for the longest time, I thought that meant I couldn’t claim the story of my assault. I framed it to a few people like it was a weird hookup, and never even considered telling my school, not even when the same guy was kicked out of his frat for sexually assaulting someone else.

I know now that there is no single way to experience assault. It could very well be that I’m still intensely repressing my trauma and don’t even know it. What I do know is that since I realized what happened, I have become a tougher, angrier, more mature woman. I know I would now do things completely differently. I believe I would clearly demarcate my own boundaries, without fear of what he thought of me. I would be less timid. But that said, my timidity on that night absolutely does not excuse my assault. Yes, women can take steps to protect themselves against assault, but the blame lies entirely on the assailant. As the wise adage goes, we shouldn't have to teach women how to protect themselves against assault — we should teach predatory men not to assault women in the first place.

I certainly don’t blame my younger self, but it does feel like what happened didn’t even happen to me, but to someone I no longer am. Someone more naïve, more eager to please, someone who did not yet know how to assert herself against such a violation. I’m happier now. And while I can say that, unfortunately, that experience and its confusion will always reside with me, I’m thankful it happened the first night of college. Because early on, I realized I could withstand what I once thought to be unfathomable.

Editor's Note: This post has been updated from its original version, and the writer's name has been changed.

More like this
5 Ways To Stand In Solidarity With Women In America From The UK
By Sophie McEvoy
How To Fight For Reproductive Rights, Based On How Much Time You Have
By Courtney Young
Why You're Seeing Green Bandanas At Abortion Rights Protests
By Lexi Inks
How To Come Out Online, According To Trevi Moran
By Melanie Mignucci
Get Even More From Bustle — Sign Up For The Newsletter