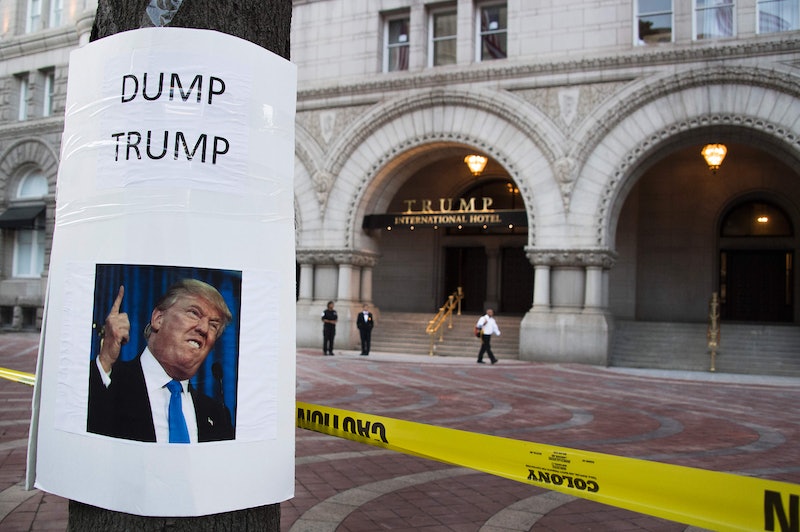 With Electoral College members convening across the country on Dec. 19, political spectators are keeping their ears to the ground for any news that could result in a last-minute shake-up that takes the presidency out of the grasp of President-elect Donald Trump. Whether so-called "faithless electors" cast their votes for Hillary Clinton or another person, the unprecedented nature of Trump's win and this entire election cycle has some wondering: How many faithless electors would it take to stop Donald Trump's presidency?

Recount results notwithstanding, Trump has 306 electoral votes to Clinton's 232. It takes 270 votes to win the presidency, so it would take 37 faithless electors to either abstain from voting or to cast their vote for another person to put Trump's win in jeopardy. While 36 electors deciding to take their votes away from Trump seems somewhat doable, it's important to remember that those electors must come from one of the 30 states where Trump won the majority of the votes. Because each party chooses their electoral delegation, and the electors of the winning party are the ones to cast their votes for the presidency, this makes the possibility of 36 very involved Republicans voting against their party's nominee all the more unlikely.

Despite the extremely unlikely nature of an 11th-hour Electoral College switch-up, there are at least seven electors intent on stopping Trump with their super-sanctioned votes. They call themselves the "Hamilton electors," and rather than helping Clinton win the presidency, they plan on casting their votes for a moderate Republican like Ohio Governor John Kasich. On Dec. 5, just two weeks before the electors convene in their respective state capitols, Texas elector Christopher Suprun, another faithless elector, published an op-ed in The New York Times explaining why he won't cast his vote for Trump. While Suprun hasn't identified as a "Hamilton elector," he cited the famed founding father in his op-ed as one of his many reasons for defecting from his party and voting his conscience.

While it's certainly unlikely that 37 Republicans will turn their backs on their party's presidential choice, it's not within the realm of impossibility. There have been 157 total faithless electors in American electoral history, though none have ever changed the outcome of an election. The chances of narrowly avoiding Trump's presidency at the last minute are mighty slim, but in a year like 2016, anything could happen.