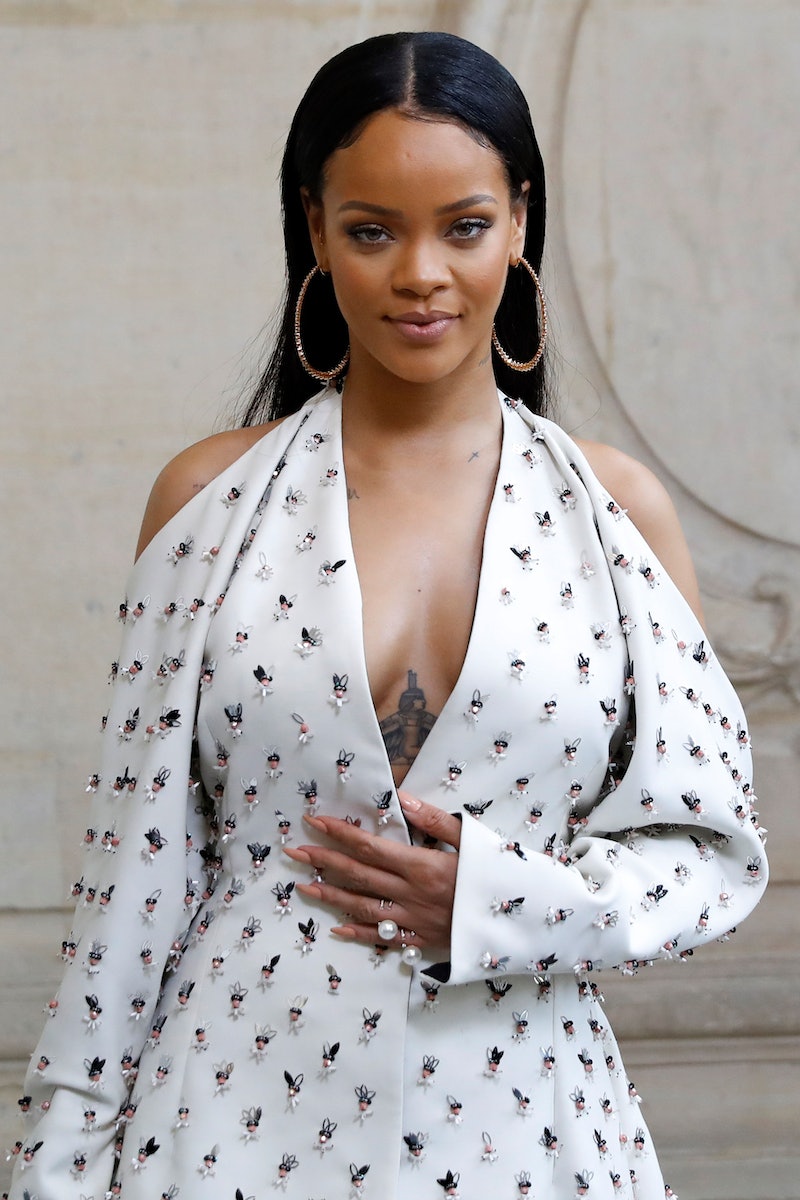 Brace yourself, because I've got good news and bad news. Good news first? When the 2017 nominees were announced on Tuesday, Rihanna was nominated for eight Grammy Awards. As the queen of collaborations, RiRi's track "Work" with Drake is up for Record of the Year, as well as Best Pop Duo/Group Performance. Meanwhile, her "Famous" collab with Kanye West is competing for both Best Rap Song and Best Rap Sung Performance. But wait a minute, why isn't Rihanna nominated for Album of the Year? After all, Anti is a masterpiece and stands on its own. And, sure, Anti is in the running for Best Recording Package and Best Urban Contemporary Album, but that's not quite the same. In fact, fans on Twitter are considering this to be a major snub.

While there are only five slots in the Album of the Year category and this year's contenders are undeniably talented (Beyoncé, Adele, Drake, etc.), it just feels wrong for Rihanna's name to not be on that list. Especially since there are three separate Anti songs nominated — "Work," "Needed Me," and "Kiss It Better." Doesn't that mean the album itself is multifaceted? Not only that, but having several songs nominated individually showcases her range of talent. To me, those are the qualifications that make it worthy of an Album of the Year trophy. Or, at the very least, a nomination. My best guess is that there simply weren't enough slots for all of the talented artists. Otherwise, her name would be right alongside those of the others.

It's impossible to know the concrete reason the Recording Academy did not allot RiRi one of those AOTY noms, but I will say that at least they didn't ignore the album entirely. It's holding its own in six other categories, including the aforementioned Record of the Year. It just feels unfair that the entire album — one that's filled with so many notable tracks — doesn't get its own accolades. Yes, Rihanna's work with Drake ("Work") and West ("Famous") is worth celebrating, but she's also her own artist, who deserves that solo spotlight. Just this past year, Rihanna won the MTV Video Music Awards Vanguard Award. Yes, at age 28, she won a lifetime achievement award — and earned it entirely. She's proven herself time and time again in the world of music by evolving her sound and providing songs that you just can't get out of your head.

If I had to guess, she won't be going home empty-handed at the Grammys, but it would've been nice to see Anti get more love — specifically in the Album of the Year category. At least one plus is that Drizzy is up for AOTY for Views , and Rihanna is listed as one of the people who worked on the album. Of course, that's not the same thing as winning herself. But, if Drake does take home the trophy, there's no way she wouldn't be rooting for him, right?

While RiRi's Anti did technically get snubbed, she wasn't completely ignored. So let's look on the bright side here and cheer her on regardless. She still could take home Grammys gold.

More like this
What Is Ariana Grande's Net Worth? When It Comes To Money, She Has No “Problem”
By Hugh McIntyre
Beyoncé Delivers “Soaring Vocals” On New Album “Renaissance”
By El Hunt and Radhika Menon
Everything To Know About J-Hope From BTS’ Solo Album ‘Jack In The Box’
By Stephanie Topacio Long
Somebody Convince Soccer Mommy To Make A Metal Album
By Samantha Leach
Get Even More From Bustle — Sign Up For The Newsletter