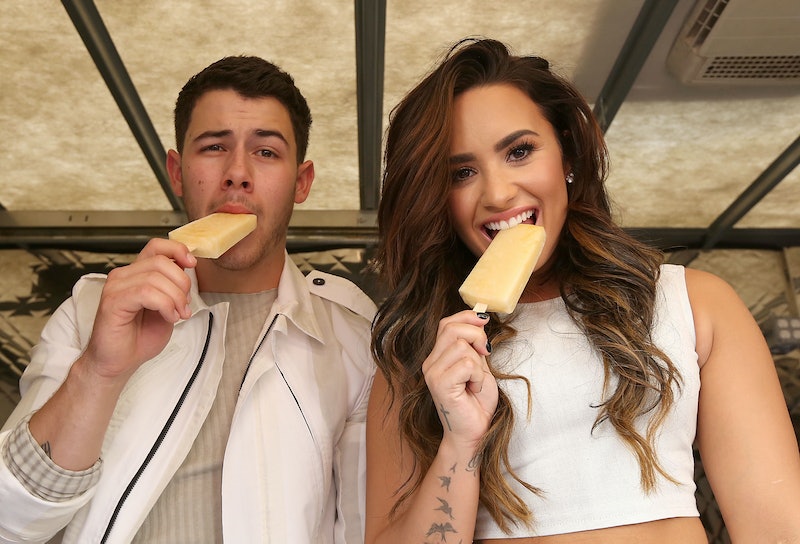 The frivolity of Hollywood dictates that so many things within that bubble are temporary — relationships, jobs, partnerships, they all come and go. But one thing that's unfailingly stayed the same and has really only gotten stronger? The endearing friendship between Nick Jonas and Demi Lovato. The pair have gone from Disney pals to business partners to tour-mates, and the love between them now extends to major accolades. Case in point, on Tuesday, Jonas tweeted about Lovato's Grammy nomination and it's just about the sweetest thing ever.

First things first, the singer was having a major freakout over her nomination for Best Pop Vocal Album as it was. She adorably tweeted out her gratitude, shock, and awe multiple times with multiple exclamation points, saying,

She later tweeted, "I still can't believe I've been NOMINATED FOR A GRAMMY.... you guys have no idea how unbelievably grateful and happy I am.. wow... #pinchme."

But perhaps even more touching than her own excitement and pride over her success, is that of her friend's for her. Despite not earning any nominations himself, Jonas tweeted to congratulate her. The respect and admiration he harbors for Lovato is so apparent in the short yet sweet sentiment.

Besides, if anyone can appreciate her being honored, it's him. Jonas and Lovato just recently did the Future Now tour and they also have a record label together. And that's not to mention their clearly close relationship, all business aside. I mean, they wore a duo Halloween costume, you guys. You can't get higher on the BFF scale than that.

In fact, Nick wasn't the only Jonas family member to congratulate Lovato on her success. Joe Jonas also tweeted her some love and it only proves how genuine the friendship between them all is:

*Wipes tear* Just... try not to think about her taking Nick or Joe or both brothers as her date(s) to the award show. *Blows nose*