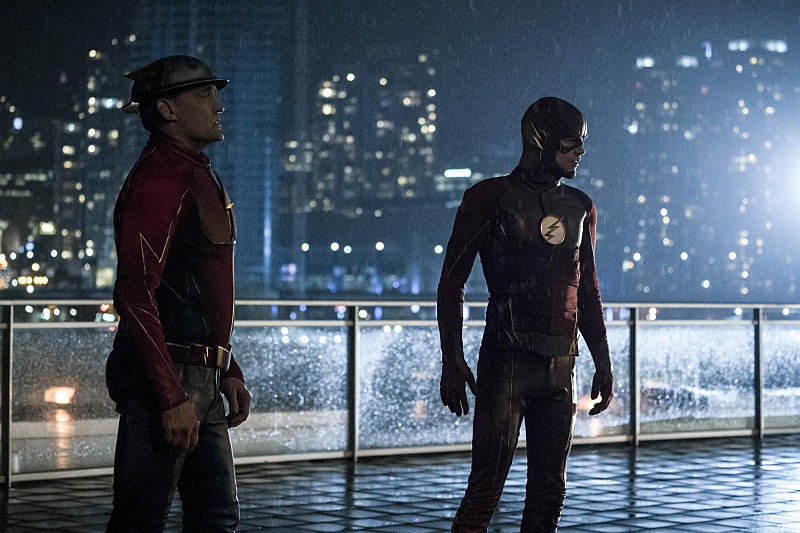 Barry ran to Earth 3 to recruit Jay Garrick (aka, the Man in the Iron Mask from Season 2, aka another Flash) to help in the fight against Savitar on The Flash mid-season finale, "The Present." Savitar, the self-proclaimed God of Motion, is a looming threat to Barry and his friends, and he wants to defeat him as soon as possible, and that means learning anything and everything he can about his opponent. So, Jay Garrick returned to help Barry defeat Savitar on The Flash , but it wasn't that easy.

It turns out, Savitar is almost like a mythical figure, even to Jay, a more seasoned Flash. Jay has never seen Savitar, but heard of the myth of the first speedster, the first meta, turned by the Philosopher's Stone. When Alchemy attempted to use the stone for some kind of power ritual, Barry was ready and went after it with Jay by his side. Jay was able to hold off Savitar while Barry defeated Alchemy and secured the stone in a wooden box. The minute the stone was put away, Savitar disappeared, his power clearly drained, and Barry was able to finally peak under the mask and find out the identity of Alchemy: Julian!

Barry arrested Julian and put him in a cell at Star Labs while the team analyzed the stone and the box. At first, Julian refused to answer The Flash's questions, but when Barry took off his mask and revealed his secret identity, Julian was surprisingly talkative. It turns out, Savitar has a way of conjuring dead loved ones and tricking people, like Julian into finding and opening the box, setting Savitar free and allowing him to possess them. At the lab, he tries to pull it on Cisco, and almost succeeds before Caitlin brings Cisco back to reality.

Julian, it turns out, was under Savitar's spell the whole time. He actually had no idea what he was doing as Alchemy. His helplessness and newfound appreciation for Barry's superhero alter-ego led Julian to help Barry and Team Flash communicate with Savitar and figure out what he wants. Savitar tells Barry that his future self defeated him, and that's why he is after Barry now. In an effort to kill him, Barry and Jay sent the stone into the Speed Force, where no one could ever find it. Or so we think...

Savitar might still be out there, but at least one good thing came out of the whole ordeal: Julian likes Barry now! He even went to the West house for Christmas and got Barry his job back.

We'll see how long this new bromance lasts when The Flash returns in January.