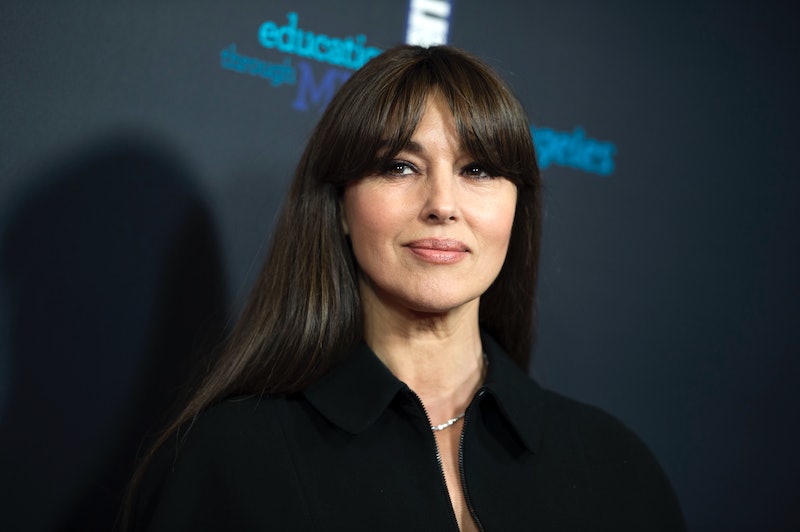 There's a new face joining the cast this season of Mozart in the Jungle, and she's already making quite the impression in the trailer for the next installment of the Amazon original series dropping Friday, Dec. 9. That visage belongs to Alessandra, who is played by Italian actress Monica Bellucci. As Rodrigo finds himself in Venice, Italy in Season 3 of Mozart in the Jungle , he seems to become captivated by opera singer Alessandra and her stunning voice. It looks like she has the emoting of an opera singer down pat, but can Bellucci sing in real life?

Well, she probably can't sing opera. The voice you hear in this preview and will be hearing more of this season of Mozart in the Jungle doesn't belong to Bellucci but to Grammy Award-winning soprano Ana María Martínez, according to The New York Times. But The New York Times also described Bellucci as resembling legendary opera singer Maria Callas and lip-syncing "seductively" as she performed with opera icon Plácido Domingo on the set of this season of Mozart in the Jungle, so that's not too shabby!

However, Bellucci has sung on screen before. The actress did a rendition of Elvis Presley's "Can't Help Falling In Love With You" in the 2015 French-Canadian movie Ville-Marie. In the movie, Bellucci plays an actress visiting her 21-year-old son in Montreal, and she serenades him during his birthday dinner, seeming to not care whether or not she embarrasses him. Bellucci's cover is definitely a very breathy take on the King, but she makes the song her own.

Just as Bellucci seems to be something of a new muse for Rodrigo (and probably a love interest, let's be real) this season of Mozart in the Jungle, her presence often seems to inspire music in real life. Bellucci looked fabulous as these two singers just felt like singing to her on national TV in Italy in the below clip.

Her hot makeout sesh with James Bond (Daniel Craig) in Spectre also steals the show in the music video for the movie's theme song, Sam Smith's "Writing's on the Wall." I mean, she was one of the best parts of the movie anyway, so that totally makes sense.

If you're looking for more musical moments from Bellucci's career, look — or rather, listen — no further than the 2000 film Malèna. The Italian movie features an Academy Award-nominated score by composer Ennio Morricone, and it is pretty magical.

Even though Bellucci won't technically be singing in the upcoming season of Mozart in the Jungle, it definitely seems like she'll live up to her character's nickname, La Fiamma, and bring the fire.

More like this
What Is Ariana Grande's Net Worth? When It Comes To Money, She Has No “Problem”
By Hugh McIntyre
Kate Bush Reacts To “Mad” Revival Following 'Stranger Things' Cameo
By Sam Ramsden
Tristan Thompson Plays Drake’s Best Man In A Music Video Wedding With 23 Brides
By Grace Wehniainen
Who Is Machine Gun Kelly’s Daughter Casie? His 'Life In Pink' Trailer Features Footage Of Her
By Grace Wehniainen
Get Even More From Bustle — Sign Up For The Newsletter