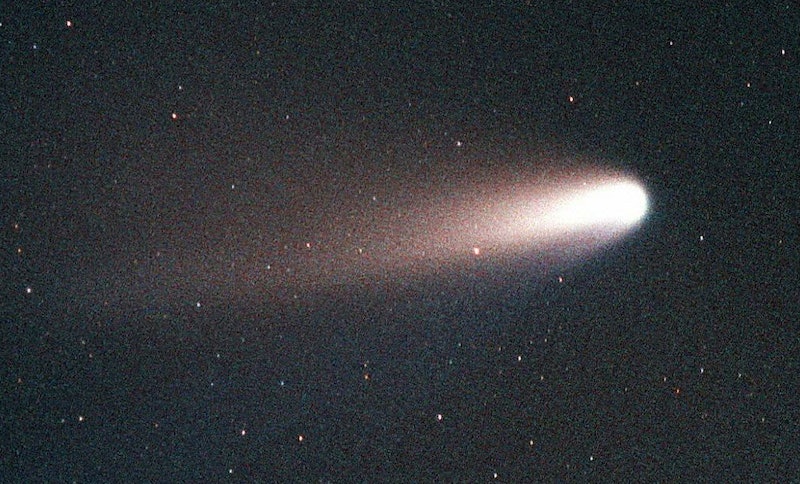 The events of 2016 may have proven difficult to predict, but that certainly hasn't stopped people from trying. Doomsday theories are always a popular subject at the end of the year; for example, in 2015, some theorized that the world would end during the last blood moon of the year. This December, the prediction is that we're all going to die in an interplanetary collision with Nibiru, a giant planet supposedly lurking in the outer edges of the solar system whose orbit takes it a little too close to Earth for comfort (but more on Nibiru later). All this is to say that predictions of doom and gloom aren't anything new — and when things look bleak, it might be worth looking to history to remind us that despite the many, many times people have thought the world was going to end, we're still here.

Doomsday theories have existed pretty much since the dawn of humankind, and they've proven to be quite persistent over the centuries. I mean, people still look to the writings of PMichele de Nostradame, AKA Nostradamus, to anticipate the future, and he died all the way back in 1566. Some go so far as to prep for the impending apocalypse by storing food and building bunkers just in case. Fortunately, as you've undoubtedly noticed since you're reading this right now, the world hasn't ended yet.

Although it's safe to say most of these prophesies won't come to pass, they're still entertaining. So if you're caught up on The Walking Dead and need your apocalyptic fix, here are seven of the weirdest, most interesting doomsday prophecies out there.

I'll start with the most pressing concern at this particular moment, the aforementioned Nibiru. According to Express, a UK tabloid, as well as a few conspiracy theorist websites, some have predicated that the planet (which probably doesn't exist, by the way) is on a collision course with none other than the Earth, and it's due to hit at some point in December. According to a slightly different prediction by Zeta Talk founder Nancy Lieder, Nibiru's orbit takes it close enough to Earth to cause mass extinction every once in a while, and its next planetary fly-by is supposed to take place this month.

Although it's true that scientists are currently on the hunt for a ninth planet in the outer solar system, it's safe to say that considering Nibiru's arrival was also predicted in 2003, 2007, 2012, and 2015 and failed to destroy us all then, you have nothing to worry about. If that's not enough to soothe your anxieties, though, NASA has debunked the prediction on multiple occasions.

In 1954, a middle-aged Chicago resident named Dorothy Martin claimed she had been in contact with extraterrestrials from the planet Clarion. She believed that the aliens informed her of an impending apocalypse in 1955, in which "the Supreme Being [was] going to clean house by sinking all of the land masses as we know them now and raising the land masses from under the sea." In other words, a flood would wash away all of humanity, save for Martin and those who became her followers. These people came to be known as the Seekers.

The predicted date of the apocalypse came and went, and no flying saucer descended to rescue Martin and the Seekers. But something good did come out of Martin's predictions: The events helped psychologist Leon Festinger develop the theory of cognitive dissonance.

The Prophet Hen Of Leeds

In 1806, a hen in Leeds, England allegedly began laying eggs that held the message "Christ is coming." According to contemporary accounts, crowds began flocking to see the eggs for themselves, convinced that the apocalypse was at hand. However, there was a simpler, if rather cruel, explanation: Someone was waiting until the hen laid an egg, wrote the message themselves, and forced the egg back inside the hen for her to lay a second time.

In 1910, the Earth was due to pass through the tail of Halley's comet, and at the time, scientists weren't quite sure what that meant for life on the ground. According to The Guardian, a French astronomer told sources at the time that the cyanogen in the comet's tail might "snuff out all life on the planet." Public concern grew to the point where people were writing to the Royal Observatory in concern for the apocalypse. Needless to say, Earth made it through the ordeal unscathed.

There were a few different doomsday theories floating around as the millennium ended, but Y2K was one of the most widespread. Thanks to what TIME called a "ludicrously shortsighted shortcut," computers were programmed in such a way that they might not be able to tell the difference between dates in 1900 and 2000. This led to fears that programmers wouldn't fix the code in time and computer systems would crash around the world, causing, well, doomsday.

Before the world's most powerful particle accelerator was turned on for the first time, there were fears that it would create an Earth-swallowing black hole. Nothing of the sort happened, but if you're still worried, you can keep an eye on it here.

I'll end with one of the most well-known doomsday prophecies of our time: The end of the Mayan calendar in 2012. The calendar is divided into cycles lasting approximately 5,000 years, and when some people noticed that the next cycle was set to end on December 21, 2012, things got a little hectic. People predicted everything from the reversal of the Earth's magnetic poles to a collision with Nibiru. There was even a 2009 movie, appropriately named 2012, about the apocalypse. As you may remember, everyone woke up on Dec. 22 a little embarrassed.

More like this
13 Summer Solstice Quotes To Celebrate The Longest Day Of The Year
By Sadie Trombetta
The Summer Solstice Spiritual Meaning, Explained
By Jessica Booth and Brittany Beringer
The Guide To “Witches Stairs” & Why They’re Actually Great For Small Spaces
By Emma Garza
11 Podcasts About The History Of Juneteenth
By Emma Carey
Get Even More From Bustle — Sign Up For The Newsletter