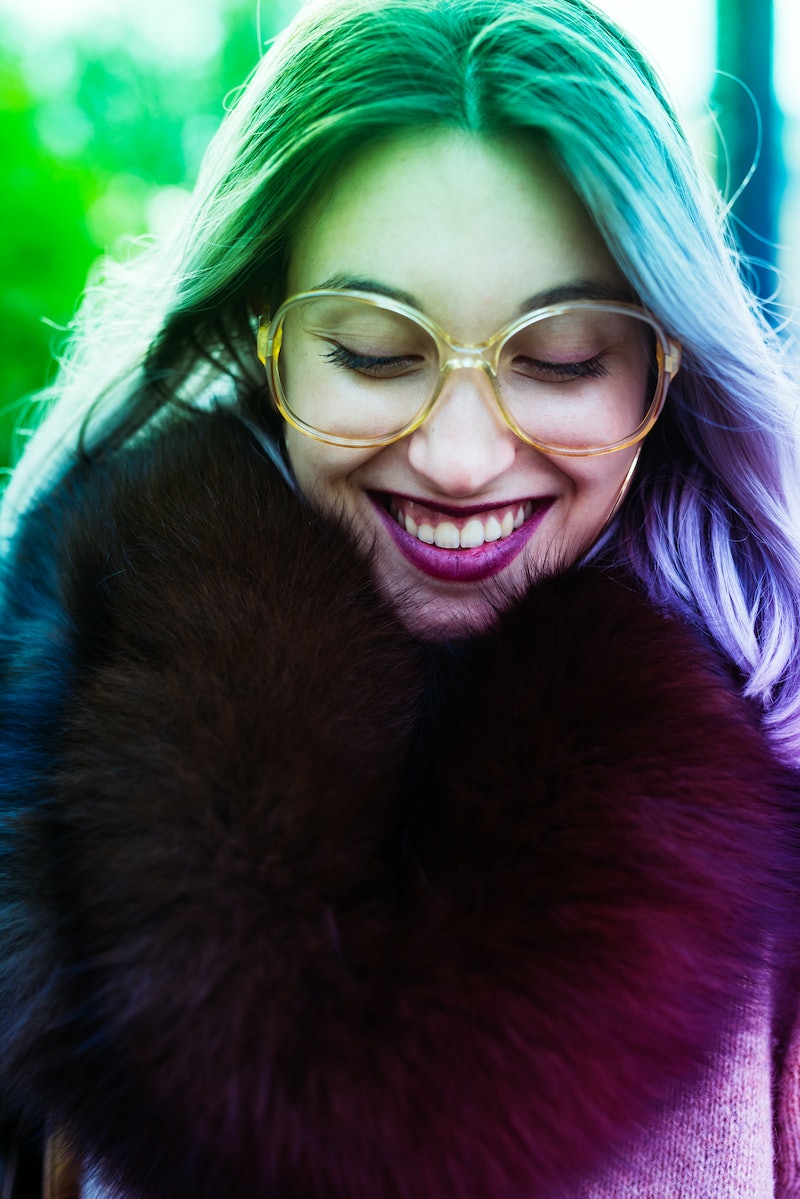 The single women stereotypes and pity that surrounds unmarried women are so, so underserved. I was happily single for years —many years— and I have a lot of friends who are happily single. Yet, for some reason, people have often approached that happiness with disbelief and condescension. Like you must be kidding yourself for enjoying it. Like you don't really know what you're missing. It's BS. Total, utter, BS. Not only are there relationships that I wouldn't ever want to be in, there are also things that are great about being independent. And autonomy, flexibility, being able to focus on your needs, and feeling empowered shouldn't be overlooked.

And, for the first time, I think people are starting to get that. Old expectations of women and femininity are finally starting to fade. While we still have a ways to go, at least the tides are turning. But remember, your attitude is part of it. "Being single is a choice," life coach Kali Rogers tells Bustle. "If you wanted to be in a relationship with someone, you could." You're just choosing not to— and that's totally fine. So here are five reasons why 2017 is going to be the year of the single woman, because it's long overdue:

1. It's The Perfect Time To Figure Out What You Really Want

Not only does it feel like national disasters and crises are happening all over the world (and in our own country), but Donald Trump is going to be president. WTF is it even going to look like? How will that affect women? It's a great time to figure out what you really want and what's best for you, even when it comes to your love life. “I think being single is an exercise that every person should go through at some point in their adult life. It is a time that gives us the distance and clarity that we need to get to know who we truly are as a person, and to firmly define what it is that we want in a future partner,” psychologist Dr. Nikki Martinez tells Bustle. Whether you need a life change or just want to join the fight for women's rights, it's time to feel empowered as a single woman.

Airlines prices keep getting cheaper and January is a great time to fly. Travel is so good for you— and it's just plain fun— so take advantage of it in 2017. When you're single, it's so much easier to do. “You can go and have any experience you want, whenever you want, and not have to worry about what someone else wants,” Martinez says. “This is the time to travel on your own, to take a class just for fun, to do as many activities that you want, as you will not always have the chance to just pick up and do what you feel like. It is not that a partner holds you back, it is that in good relationships, you make decisions as a couple.” The new year is the perfect opportunity to take advantage of being the only person you're accountable to.

3. It's A Great Time To Experiment Sexually

Not that you can't experiment in a relationship, but when you're having casual sex there's a freedom that means you are more open about suggesting and trying new things. The good news? Today, sex is different than it used to be. The orgasm gap is closing and people are more and more concerned with women's pleasure. So could you think of a better time to be sowing some wild oats?

4. More People Are Accepting Being Single As A Life Choice

Ten years ago, most people I know thought they'd be married right now. But I look around and a lot of my friends don't want that anymore. In the 21st century, being in a relationship doesn't have to be the default— and more people are accepting that. We're realizing that not every relationship is a good relationship. In fact, the Bureau of Labor Statistics found that unmarried people now make up 50.2 percent of the population, which means we have more unmarried woman than ever before. And research shows that a third of millennials will probably never marry, so it looks like we could be seeing an even bigger trend toward singledom in the younger generation.

"I'd rather be single, in a comfortable relationship with myself, than trapped in a dysfunctional, toxic relationship with someone else," certified relationship coach Rosalind Sedacca tells Bustle. And a lot of other people feel the same. So you can really own your choice to be single in 2017.

5. And A Lot Of Women Are Loving It

It's more than just avoiding bad relationships. Far from the horrific spinster stereotype, research has showed that more women feel happy about singledom than men do. “I think it is true that women are empowered to cultivate emotional resources that make them more able to be happy while single,” dating coach and certified matchmaker Francesca Hogi tells Bustle. “For many men, their outlets for emotional intimacy and expression are limited to romantic relationships. Generally speaking, women have emotional intimacy with their friends and their partners and most men only have it with their partners. So it makes sense that without a relationship, many men are missing out on a key emotional experience.”

Not only that, a study presented at the American Psychological Association's Annual Convention that looked at previous research from over 800 studies found that single women actually have more fulfilling lives than married people, in part because they experience more psychological growth and development. So it's time we start celebrating the happiness that comes from being single.

I really hope that single women own 2017, and I really hope women in relationships do as well. "I think women in the 21st Century are very lucky, single and coupled women alike," Matchmaker and dating coach Karenna Alexander tells Bustle. "... I think women in general just have all sorts of choices now and role models to help navigate the many choices, and so that is a good thing, a wonderful thing, really." A wonderful thing indeed.

More like this
The Best Time To Date After A Breakup, According To Experts
By Bustle Editors
Are Leo & Capricorn A Good Match?
By Kristine Fellizar
Expert Tips For Being On Top When You're Plus-Size
By Lexi Inks
What Is The Forest Personality Test? The TikTok Trend, Explained
By Georgina Lawton
Get Even More From Bustle — Sign Up For The Newsletter