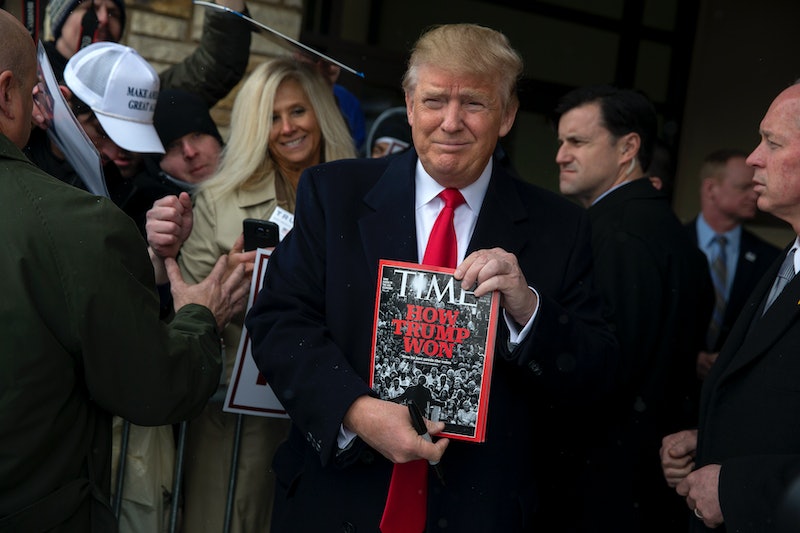 The internet is abuzz with news that Donald Trump is TIME Magazine 's Person of the Year for 2016. But as journalist Sopan Deb pointed out, the president-elect still has a soft spot for the magazine's old title for their annual issue, Man of the Year.

At a Jan. 7, 2016 rally in Burlington, Vermont, Trump polled the audience on which is a better title, "Man of the Year" or "Person of the Year." This was after admitting that "it's pretty cool" that he was soon to be on TIME's cover for David Von Drehle's story "The Art of the Steal." Trump goes on to ask the audience, "What sounds better ... for the women? Only the women. What sounds better, 'Person of the Year' or 'Man of the Year'?" to which many voices replied "Man." After hearing the answer he wanted, Trump went on to lament that he "[has] to be politically correct" and as such will use the proper title.

Even with the many people who responded to Trump's question on the title by siding with "Man of the Year" Trump clarified that he prefers "Person of the Year," but "it just doesn't sound that good." See for yourself in the below Washington Post video of the event, starting at around an hour and 28 minutes in.

TIME started choosing an annual Man of the Year in 1927. The magazine used the title "Woman of the Year" five times before it permanently changed to "Person of the Year" in 1999 when it chose Amazon CEO Jeff Bezos. Despite his claims to liking the new, more inclusive title, Trump still felt the need, a propos of nothing, to call it into question at his Burlington rally. Even more sinister is how Trump seems to attempt to deflect possible accusations of sexism by posing the question directly to the women in attendance, saying they are the ones who prefer "Man of the Year" to "Person of the Year."

This moment was largely forgotten until TIME made its Person of the Year announcement Wednesday morning. But it is one of many examples of the kind of casual sexist rhetoric Trump used throughout his presidential campaign. The video is even more loaded now that we know 52 percent of white women voted for the president-elect, even despite Trump's history of alleged sexual discrimination, harassment, and assault, all of which he has vehemently denied.

Benevolent sexism is still sexism, and no matter how Trump may sugarcoat misogyny in the future, it's up to all of us to avoid simply taking such language at face value. Trump may think his female supporters would have preferred he be named "Man of the Year," but luckily, that's just not an option anymore.