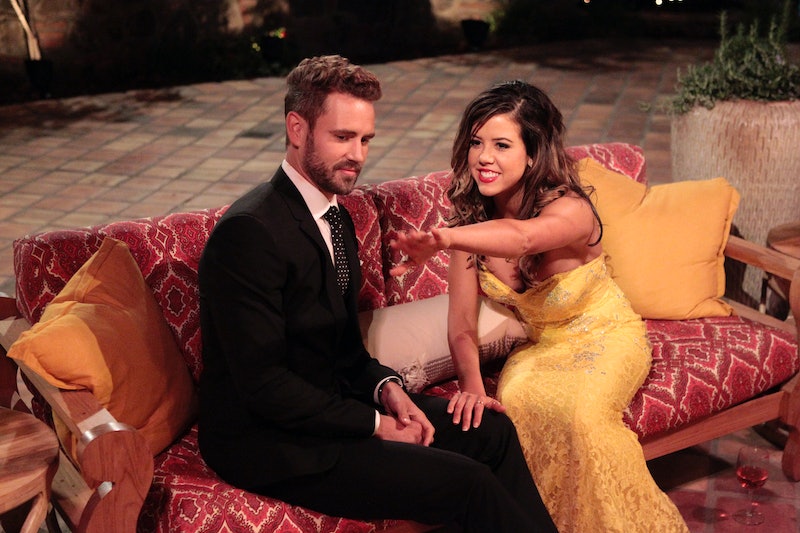 Even though The Bachelor has chosen a familiar suitor in Nick Viall (fourth time's the charm, right?), that doesn't mean the show isn't trying to switch a few things up. For instance, Season 21 of The Bachelor will feature 30 contestants, not the usual 25, for only the third time in history. Perhaps to increase the odds of Viall finding "the one"? ABC released bios for each woman vying for Viall's heart, and on paper, these ladies do seem have a bit in common with this perennial Bachelorette cast member, and they all seem to really like dolphins. But, the most important thing that's revealed in these bios happens to be a number. Look closely at the ages of the women who are competing for that final rose, and it turns out, this cast of Bachelor women is around the same age as past years. That's despite Viall himself being a bit older than most of those who came before him.

Out of the 30 women on Viall's season, nine are 25 years old, which just so happens to be the average age of female winners. (It seems like someone is really trying hard to make sure Viall finds his forever love.) The majority of women on the show are 25 and up, with 21 contestants falling into that category this season, but it's a misleading statistic. The youngest contestant on the show is 23, while the oldest is 31. But, there are four 23-year-olds and only two 31-year-olds. Nine women competing for Viall's heart are under the age of 25, while 14 women are over 25. But, those nine younger contestants are either 23 or 24 years old.

There may be more woman who are 25 and up, but that's also a larger age range being that the oldest contestant is just 31 years old. The majority of these women who fall into this "older" age bracket are just 26, still a decade younger than Viall. For the record, no woman over 32 has ever made the final four, according to Huffington Post.

Viall's season isn't the youngest — that honor goes to Season 3 with 28-year-old Bachelor Andrew Firestone, which had a median age of 24.64 years old. But, it seems like the producers of The Bachelor are taking a page out of Wooderson's book in Dazed and Confused ; the show keeps getting older, but the women stay the same age. Last year, Bustle took a closer look at the age of every Bachelor vs. the age of his contestants and found that there is large discrepancy between the two, especially when the Bachelor is older than average. Case in point, repeat Bachelor Brad Womack was 35 on Season 11 and 39 when he returned four years later for Season 15, but the age of his women actually decreased from 27 to 26.86.

Looking at the data, what should stand out is that Viall is one of the few bachelors whose contestants' average age is over a decade younger than his. It's not the biggest discrepancy between the age of a Bachelor and the age of his contestants — that goes to Womack with 13 years — but it's up there. Not to mention, once again this sticks with the trope of older men romancing younger women. Now, age is, of course, nothing but a number and all of the women on this show are consenting adults, but age is something Viall may want to keep in mind when handing out his roses. Especially when looking at those Bachelor couples that have managed to stay together way after the cameras stop rolling.

Season 17's Sean Lowe and Catherine Giudici are the only Bachelor couple that have gotten married after the show and they are just two years apart. Higgins and Lauren Bushnell of Season 20 are also still together — despite calling off their wedding, for now — and are a year apart. Now, no one is that close in age to Viall on the show, so hopefully that's not a bad omen. But, he may want to stick to some of those women who are closer to his age, you know, those 14 women who are 26 and up, if he's looking for true love this time around.