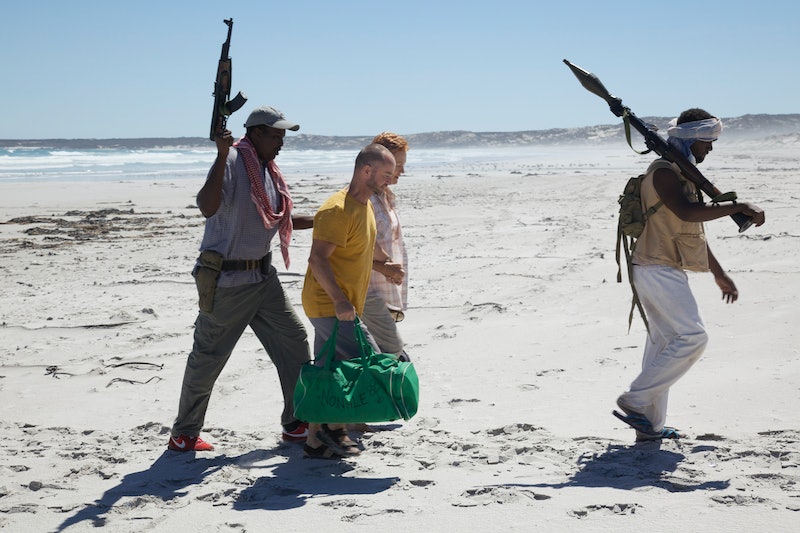 There are no shortage of shocking hostage stories in the new Netflix docuseries Captive , which begins streaming on Dec. 7. Being kidnapped by pirates sounds like the plot of an action movie, but it's exactly what happened to Rachel and Paul Chandler, whose harrowing 400 days of captivity are depicted in Episode 3. In 2009, the British couple excitedly embarked on their dream journey across the Indian Ocean — but it wasn't long before they were captured by Somali pirates and subjected to daily physical and emotional torture. Over a year later, the couple was released in November 2010 and you may be surprised to learn what Rachel and Paul Chandler from Captive are doing today.

Most people would avoid the seas altogether after such a traumatic experience, but in October 2012 The Daily Mail reported that the couple was excited to set sail once again on their beloved 38 foot yacht, Lynn Rival, which had recently been restored. As they prepared to embark on their journey, Paul acknowledged that they didn't expect people to understand why they were so eager to venture out of their hometown of Tunbridge Wells, Kent. "It’s not easy for other people to understand why we do what we do ... I know we have our detractors, people who think we are crazy to go back to the open sea," he told the outlet.

As they prepared to set sail, the couple emphasized that they wouldn't let fear stop them from doing what they love most — and the fact that the Chandlers refuse to let their prior trauma prevent them from engaging in their greatest passion illustrates just how courageous and resilient they are. (Although, of course, it would be completely understandable if the pair never wanted to even look at the ocean again — because anyone who survives such a horrific ordeal is courageous.)

Prior to returning to the high seas, the Chandlers published a book recounting their days in captivity. Hostage: A Year at Gunpoint with Somali Gangsters was released in 2011. At the time, the couple told The Guardian that they didn't suffer from PTSD, survivor's guilt, or humiliation about what had happened to them. Rather, they were focused on the future and neither Rachel nor Paul wanted to be defined by their ordeal.

"We've written the book, and that was important to us, but being an ex-hostage is not going to rule our lives," Rachel told the outlet. Paul echoed her sentiment: "I am an ex-hostage, obviously. But I don't want to be defined by that." And, as for the people who blame the Chandlers for supposedly being "reckless" and therefore at fault for their own kidnapping? When loved ones expressed concern that such comments would upset the couple, Rachel's response was spot-on: "I've spent a year looking down the wrong end of a Kalashnikov. I've got quite a thick skin these days."

After their 2012 interview with The Daily Mail, the Chandlers have stayed out of the public eye. But, it seems safe to assume that they'll continue to do what they love most — spend time at sea.

More like this
Michael & Kathleen Peterson’s House From ‘The Staircase’ Has New Owners
By Kadin Burnett and Kayla Blanton
'Doctor Who’s New Star Is Already Huge On TikTok
By Maxine Harrison
Where Is Dr. Cline Now?
By Morgan Leigh Davies
A 'Bridgerton' Star Just Dropped A Major Hint About Joining The Live-Action Barbie Cast
By Bustle UK
Get Even More From Bustle — Sign Up For The Newsletter