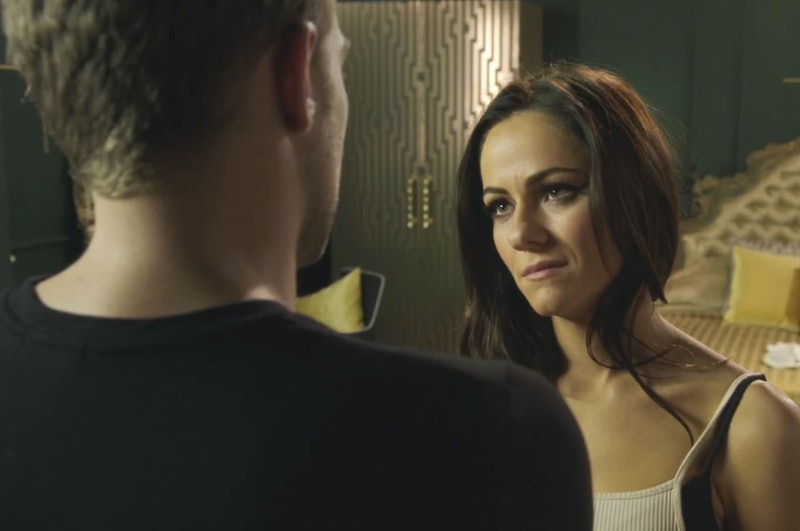 Although Princess Eleanor might not seem like a romantic on the outside, fans of The Royals know what a sensitive soul she really is. She demonstrated her sentimental side during the Dec. 11 episode when Eleanor told Jasper about another Royals romance similar to theirs. She claimed a young British queen 600 years ago fell in love with her bodyguard. She said it was an "epic, earth-shattering love affair," so is the tale that Eleanor told about the Tudors true?

Eleanor didn't give the name of the queen or the "bodyguard" (definitely not what they were called 600 years ago), but she said they were married and had two sons who went on to do great things — one appropriately named Jasper. And lo and behold, a Jasper Tudor really did exist. According to Encyclopedia Britannica, Jasper was the Duke of Bedford and lived from 1430 to 1495. He was also the uncle of King Henry VII, but enough about him — what's the deal with his parents?

As Eleanor said, Jasper's mother was royalty. She was the French Catherine of Valois who had married the British King Henry V in 1420, as writer Heidi Murphy outlined for the website Britannia. Catherine is also a character in William Shakespeare's play Henry V. Henry V died just two years after their marriage in 1422 when Catherine was only 21 years old. She had a son with him, who became king as an infant after his father's death — Henry VI. After her husband's death is when the epic affair that Eleanor talked about came to be.

According to BBC's iWonder, Owen Tudor — or initially spelled as Owain Tudur — had previously been a page for King Henry V's steward Sir Walter Hungerford. But the Welsh squire Owen was appointed as Keeper of the Queen's Wardrobe (so, yeah — not really a bodyguard) following Henry V's death. There's a legend that Owen fell into Queen Catherine's lap during a drunken dance at court, but whether or not that happened doesn't really matter since the two began an affair regardless. While the date isn't known, the pair married in secret around 1429 since their relationship was generally forbidden.

The pair actually had four children together, three of which were sons — Edmund, Jasper, and Owen — so Eleanor missed one of their sons, but I figure she never really paid much attention in history class anyway. Queen Catherine died shortly after the birth of their daughter and her marriage to Owen became known to the public and he was arrested. Thankfully, Owen had a stepson in high places — aka King Henry VI of England — so he was eventually pardoned and given lands and titles. He was unfortunately executed during the War of the Roses, but his legacy ended up living on beyond what anyone could have expected since Edmund's son became King Henry VII. So Owen and Catherine's love created the Tudor dynasty that contained both Henry VIII and Elizabeth I. Not too shabby for a bodyguard.

Although I couldn't find any proof that Owen and Catherine swapped secret letters in a hollowed out book like Jasper and Eleanor are now doing (swoon!), Eleanor was accurate when she said a queen ended up marrying her servant after an affair. And Jeleanor 'shippers can only dream that this fan-favorite couple of The Royals will have a similar fate.