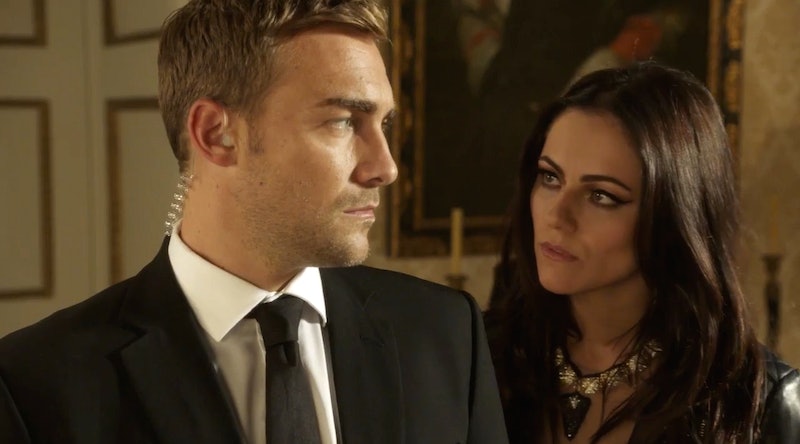 Despite their very, very dysfunctional start (and middle), it's kind of impossible not to 'ship Jasper and Eleanor — aka Jeleanor — on The Royals. So seeing Eleanor forgive Jasper on The Royals during the Season 3 premiere was a pretty tremendous moment for all Jeleanor 'shippers. Although Jasper has done plenty of horrible things that many people would not be able to forgive him for, he's still a fan favorite, especially because he has been so truly devoted to that other fan favorite Eleanor. While it still might take some time for these crazy kids to become a full-fledged couple, the start of Season 3 of The Royals definitely has me excited for the potential of a healthy Jasper and Eleanor relationship.

In Season 2, fans got the best and worst of Jasper. Jasper discovered that Ted Pryce was the murderer of King Simon, finally solving that mystery for both Prince Liam and Princess Eleanor. Unfortunately, his original reason for being at the palace was also revealed when Jasper's ex Samantha seduced Eleanor. Jasper and his American girlfriend had wanted to steal royal jewels and when Jasper became emotionally invested in Eleanor, Samantha decided to take matters into her own hands by posing as "Mandy" and dating Eleanor. Then, of course, we can't forget that Jasper had sex with Eleanor's mom, Queen Helena, back in Season 1, So, yeah, Eleanor has had her heart broken because of Jasper many times before.

Yet, true love is hard to deny and Jasper does truly love Eleanor. After they held hands in the Season 2 finale, there was a spark of hope for the couple that Season 3 proved wasn't just a tease. After presenting himself as a new and improved version of Jasper (with the help of Eleanor's security guard James Hill), Eleanor told Jasper, "I've decided to forgive you." He hesitantly asked, "For what?" And she replied, "For all of it."

Jasper played it cool in front of Eleanor, but he was thrilled to be forgiven. Hill caught him celebrating on the security camera and showed it to Eleanor. She wasn't going to let Jasper off that easy, so even though she told him to ask her out that evening, when he showed up for a date, she said she was busy painting her room. She didn't have any paint (typical Eleanor), so Jasper had to go out and get some. Yet, while Season 1 Eleanor might have left the palace while he was gone to go out and party, she stayed true to her word and really did paint her room with Jasper. Because she has baggage — some related to Jasper, some not — she's understandably going to have a hard time letting him in, which she is self-aware about as she told him, "Don't give up on me." His swoon-worthy response? "I won't, ever."

Although I'm not naive enough to think that The Royals won't throw a wrench into their bliss, I'm genuinely excited for Eleanor. She deserves to be happy and while Jasper has betrayed her before, I really don't think he ever will again. While there is so much drama for Eleanor to deal with, let's hope that Season 3 will make her love life something she doesn't have to worry about and give her a real chance at joy. Of course, Jeleanor being together probably means something truly awful will happen to Jasper, but let's just be happy for these two crazy kids in love for now.

More like this
Why Simone Ashley Had To Study Snails For Intimacy Training, Pre-‘Bridgerton’
By Grace Wehniainen
James Marsden Kept Teddy’s Westworld Season 4 Return A Secret “For Years”
By Brad Witter
Everything You Need To Remember Before Westworld Season 4
By Brad Witter
The Umbrella Academy Cast Breaks Down That Wild Season 3 Finale
By Gretchen Smail
Get Even More From Bustle — Sign Up For The Newsletter