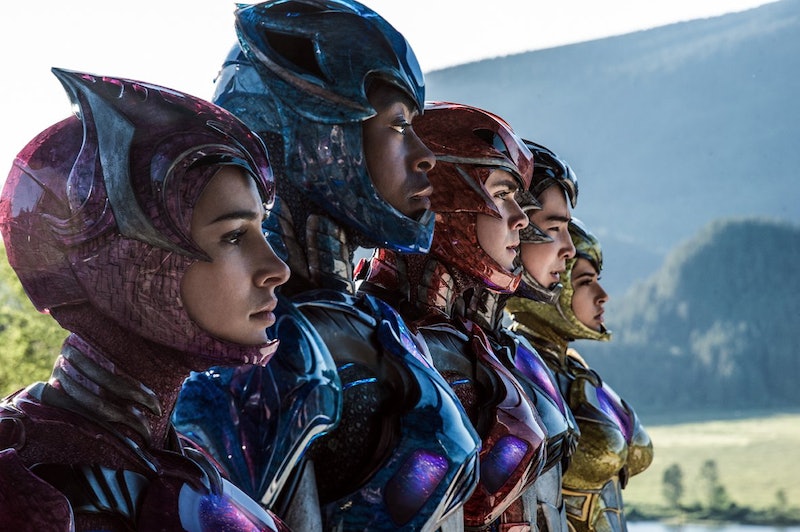 The new Power Rangers movie might have forgone the original series' confectionary colored polyester suits for more heavily armored, complex ones, but that's not the only thing getting an update. At least, that's what we can glean from watching the teaser trailer that came out in October, or taking a look at the newest Power Rangers poster. The latter of which offers a necessary glimpse into one of the most essential aspects of Power Rangers — the Zords. Wait, the what? The Zords. The dinosaur-based fighting robots that each of the Rangers controls. If you can't recall the importance of the Zords, maybe it's time for a little refresher.

You probably, at least, remember the catchy "it's Morphin' time" song, right? It went like this: "It’s Morphin’ Time! Mastodon! Pterodactyl! Triceratops! Saber-toothed Tiger! Tyrannosaurus!" OK, let me back up. Here's the premise in a condensed nutshell (keep in mind, there's over 20 years worth of Power Rangers mythos). There's an evil villain named Rita Repulsa (amazing name, by the way). There's also a space wizard, Zordon, who appears as a floating, talking head. He's the good guy. He selects five noble teens to become the Mighty Morphin' Power Rangers, and bestows onto them the duty of protecting Earth against Rita Repula's monsters. He gives them polyester suits, dope helmets, and their own dinosaur-based fighting robots called Zords. These dinosaur-based robots combine to form Megazord, the giant humanoid robot that fights other giant robots.

Ever since visuals from Dean Israelite’s reboot began leaking, people knew the Power Rangers film's Zords would be a step away from the dinosaur-inspired designs found in Mighty Morphin' Power Rangers. Now, you can see that they're definitely more alienesque than fans were probably expecting. Take a look at two below, the Yellow Ranger's Saber-toothed Tiger inspired Zord and the Red Ranger's Tyrannosaurus inspired Zord.

They don't look much like Saber-toothed Tigers or any type of Tyrannosaurus robots '90s kids remember, but that could be because the Zords themselves changed over the course of the Power Rangers narrative. As the show went on, the Zords went from dinosaur-like robots to beast-themed Zords. The Mastodon became a Lion Thunderzord; the Pterodactyl, a Firebird Thunderzord; Triceratops, a Unicorn Thunderzord; Saber-toothed Tiger, a Griffin Thunderzord; and Tyrannosaurus, a Red Dragon Thunderzord. This change was inspired by the Japanese series on which Power Rangers was based, Super Sentai. To make matters even more confusing, Ninjazords (Ape, Frog, Bear, Crane, and Wolf versions) were also later introduced.

So, maybe these Zords look bizarre to us because they are a combo of all three types of Zords. Or maybe it was just time for an update. We'll have to wait until March 24, 2017 to find out. Until then, go, go Power Rangers — and your Zords. Whatever they are.