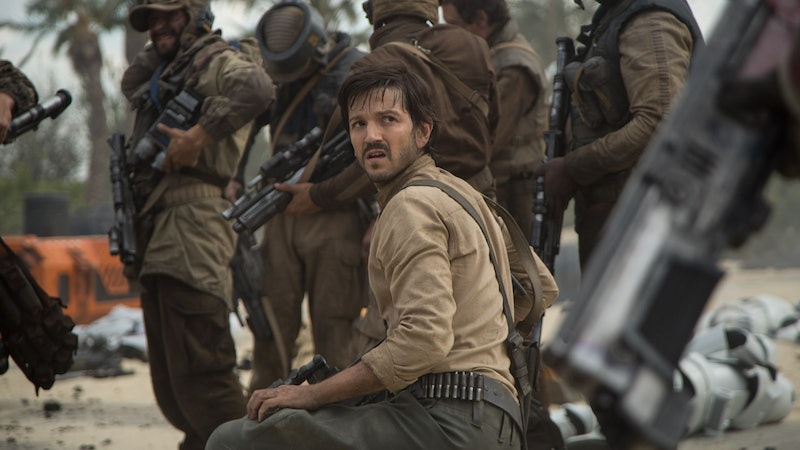 I have a confession: I am super pumped to see Diego Luna (of Dirty Dancing: Havana Nights and Y Tu Mamá Tambien fame) in Rogue One: A Star Wars Story . So, when we finally found out just who he would be playing, I had a lot of questions. In Rogue One, Diego Luna stars as Captain Cassian Andor, one of the many Rebel fighters who joins Jyn Erso on her mission to steal the plans to the Death Star. But, who is Cassian in Rogue One exactly?

According to his official bio on the Star Wars website, Cassian is an "Alliance Intelligence officer with combat field experience." He's essentially a star player in the rebellion, known for getting the job done and being a faithful and reliable soldier. "He has a weariness that he carries," producer Kiri Hart told Entertainment Weekly , "It comes from, 'We're in it, I'm committed for the long fight, and it's not something that I came to yesterday.'" As a veteran of sorts, Cassian is much more experienced in the traditional ways of combat than Jyn, who seems to be more of a free spirit. And the two of them definitely butt heads, especially when Cassian is brought on to supervise her mission.

That said, no matter how Jyn and Cassian feel about each other initially, Cassian is a huge asset to Jyn. As a longtime Rebellion fighter, he has a network of spies and informants across the galaxy, according to a report by Inverse, which will certainly come in handy. He also has connections to Saw Gerrera's extremist Rebellion group, as well as other factions working against the Empire. He's also good in a fight."He's an intelligence officer. He's a captain of the Rebellion and for a quite a long time he's been doing the dirty jobs," Luna said about his character in an interview with/Film. To prepare for the role, Luna did a little bit of military training, which he said resulted in a greater understanding of how the Rogue One team would actually go about their mission. "All that training paid off with how I should move, grab my weapon and how we moved as a team on the ground in dangerous situations. It was intense," Luna said in an interview with IGN.

In addition to being one of the key players in the Rebellion, Cassian also brings another character into the fold: his droid, K-2SO. K-2SO is an ex-Imeprial drone, set free of Imperial programing by Cassian during a mission some time ago. In his interview with /Film, Luna described K-2SO as Cassian's "best frien, and in a separate interview with Entertainment Weekly, Alan Tudyk, who portrays the droid via motion capture, said that K-2SO was extremely loyal to Cassian. "He wants what Cassian wants. He loves Cassian, because he freed him," Tudyk revealed.

Based on what we know, it looks like Cassian is squarely in the good guy category. Let's hope he doesn't get seduced by the Dark Side anytime soon.