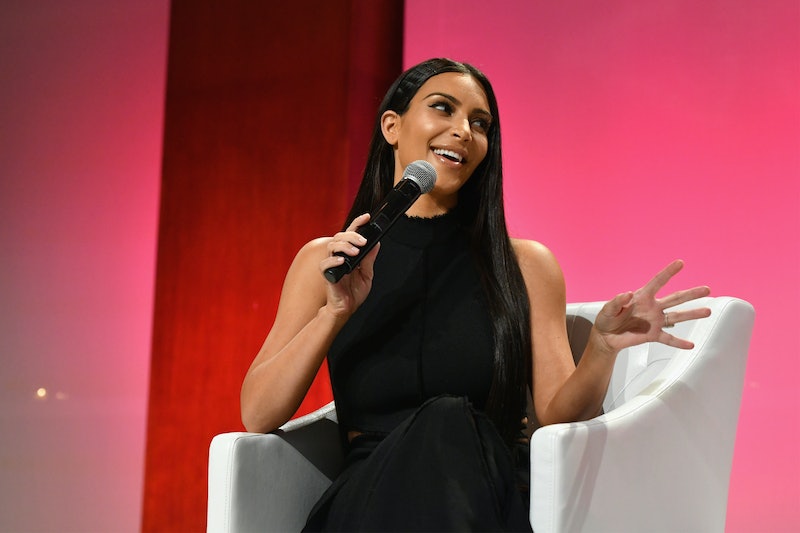 I learned a valuable lesson today, and that lesson is this: when it comes to her mobile game avatar's eyebrows, Kim Kardashian does not kut korners. Thanks to an exclusive behind-the-scenes look at Kim Kardashian: Hollywood from Glu Mobile, fans get a little glimpse into how the iPhone game sausage is made. And it is quite brow-opening, excuse me, eye-opening, to say the least. In the clip, the Keeping Up with the Kardashian star records soundbites for the Glu app, reacts to her Forbes cover story, shoots the live-action videos that play throughout KK:H, and plans out what her avatar will wear next.

As far as styling her avatar goes, no detail is too small. For example, when presented with the 2D cartoon version of her Met Gala ensemble, Kardashian appears to hop on Snapchat and ask her fans to vote on what the avatar’s eyebrows should look like. Yes, even the avatar eyebrows are vetted. But should we really be surprised? This is KK:H, y’all. It's the game-changing game that earned Kardashian the title of media mogul. Any old brow will not do.

The brows up for the honor? We have the real-life Met Gala brows versus the "Wolves" music video brows. Holy Health Nut salad, how could anyone pick just one? Wow. Both are such phenomenal choices. You might say Kardashian is up to her eyebrows in good eyebrows.

Sorry to switch up the subject on you, but Kardashian in that recording studio booth calls to mind her short-lived music career. As far as I'm koncerned, "Jam (Turn It Up)" is a jam worth turning up. Will we ever get another tune from Kimmy K? Eh, probably not. Back in 2014, Kardashian told Andy Cohen that she regretted ever throwing her hat into the pop music ring, so I won't hold my breath for a followup to her 2011 single. But hey, I will never stop krossing my fingers.