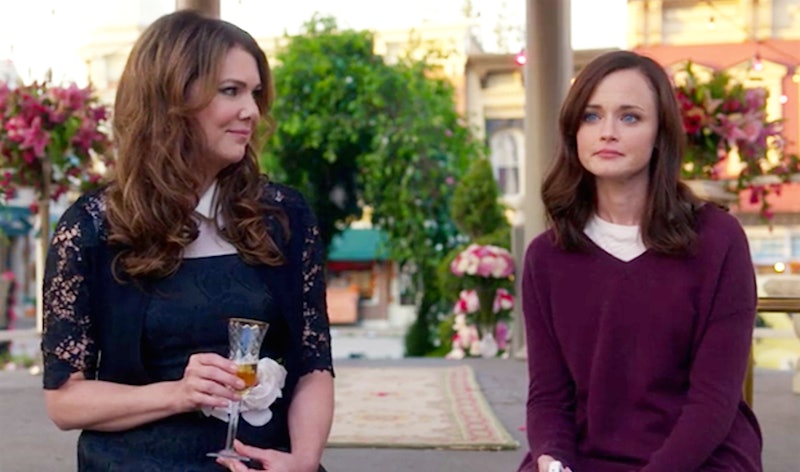 As all fans have a collective caffeine crash following Netflix's Gilmore Girls revival, it's time to redirect our attention elsewhere: awards season. Yes, the only bigger celebration of pop culture beyond, well, Gilmore Girls, is the Golden Globes, and with nominations forthcoming, it's worth wondering if the two will actually merge. In other words, is Gilmore Girls: A Year In The Life eligible to receive Golden Globes this year?

While the official deadline for film, television, and streaming title submissions was Oct. 31, 2016, the release date for Gilmore Girls: A Year In The Life (long planted in our Google calendars, so we'll never forget) was Nov. 25. Not Halloween, Black Friday. But fear not: Anything in the calendar year — Jan. 1 to Dec. 31, 2016 — is technically eligible, according to the Golden Globes eligibility guidelines. Even though GG's revival premiered after the aforementioned submission deadline, that doesn't mean the show's creators didn't throw their hats in the ring.

Basically, it's still entirely possible that all the feels-inducing performances and gut-wrenching moments in A Year In The Life could be properly honored at the 2017 Golden Globes. It just depends whether it was actually submitted for awards.

So if A Year In The Life is considered for these accolades, what exactly will it be considered? Well, obviously in the past GG has been a contender in the Golden Globes game, with Lauren Graham nominated for the drama end of the "Best Performance By An Actress In A Series" category. But this was many moons ago (read: 2002) when Gilmore Girls was a simple, straightforward TV show on the WB. Now, given the nature of how the revival was released, it's playing in a different league now.

If it were to be nominated, it would most likely qualify as a limited series, and therefore qualify for all of the "Limited Series and Motion Picture Made For Television" categories. I know that hurts to hear for those of you still craving more after those earth-shattering last four words. Perhaps if Netflix continues to go forward with another season, maybe it'll be amended to the Drama Series categories in the future. Most likely, though, A Year In The Life would be competing with short TV films and partitioned special events or miniseries this time around.

In short, A Year In The Life may or may not make the Golden Globes cut. However, few television phenomenons have created this much buzz post-finale, and that'll continue to leave an impression on voters if that thick interest — and the show itself — continues. That aside, the Gilmore Girls revival has plenty of strong, poignant dramatic moments, particularly between Graham and Kelly Bishop. So maybe those nominations, like the revival itself, will just be a long time coming.

More like this
Watch The Thrilling Teaser Trailer Of 'Shadow And Bone' Season 2
By Gretchen Smail, Jack Irvin and Sophie McEvoy
Mike Flanagan Teases 'The Midnight Club' In This Exclusive, Creepy Clip
By Grace Wehniainen
The New Grey's Anatomy Interns Have Fans Feeling So Nostalgic For Season 1
By Brad Witter
The Best 'Grey's Anatomy' Intern Moments, From MAGIC to Glasses
By Grace Wehniainen
Get Even More From Bustle — Sign Up For The Newsletter