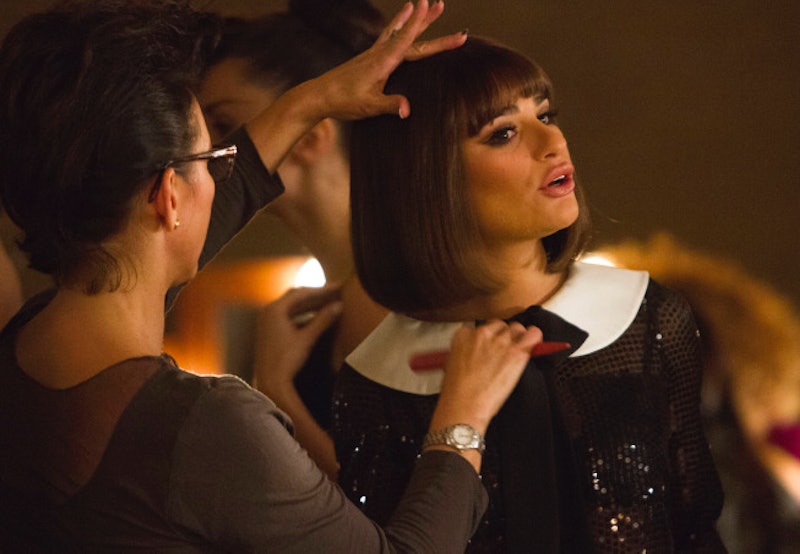 Is it just us, or has Glee turned Rachel Berry into a real monster lately? After her bitchy, competitive girl fight with Santana made us lose faith in Glee 's female friendships and she completely missed the compassion mark and pissed off Artie on Tuesday night, it's starting to feel like Glee wants us to hate Rachel. But why? Rachel's been an insufferable diva since the series aired in 2009, and Ryan Murphy kept her just likable enough that we continued to root for her. Season 5's been unkind to the one character we thought would be safe for eternity, so does that mean we're looking at a perpetual good day for Rachel in Season 6?

And just when you thought Rachel argued with everyone that would call her out for being the worst, the promo for next week's "Bash" shows Rachel and Kurt going head-to-head. That's not all either — Kurt's going to tell Rachel off by way of an epic "screw you" and now we're at a complete loss for what's going on with this character. In the promo, Rachel tells Kurt that he's afraid to grow up and become a real grown-up (we're not sure of the reason why just yet) and he's just not having any of her judgement. Who's she, really, to tell someone else that they're afraid of being a grown-up? She's more immature, drama-wise, than anyone on the show. But now that Rachel Berry's going to piss off her ultimate (and only) bestie, who's left for her to fight with this season?

There's really only one person, if we're thinking logically — because we both know that Mercedes is too mature after all of her time dealing with L.A. record executives to buy into Rachel's brand of diva. And Sam's way too happy-go-lucky to be bothered dealing with Berry-drama. So who's left? Blaine. And considering how hot-headed he was during this week's episode, what with storming over to Eliott's for basically no reason, it's safe to say that he'll be the only one to get ticked off by Rachel's newfound callousness.

But why has she turned into such a monster? Is this how she's dealing with her otherwise-ignored and unacknowledged grief over losing Finn? Or has the fame of being a big Broadway star actually gotten so under her skin that Artie's tongue-lashing on Tuesday night only temporarily made her a better person? The show made it seem like Santana was the catalyst that brought out the worst in Rachel, but now that she's gone, there's really no excuse. Rachel's reverted back to the annoying and selfish character she was in high school — a person we thought we said goodbye to a long time ago, when Kate Hudson whipped her into shape at NYADA. This sharp shift in behavior can only mean one thing — there's a big change on the horizon and where Season 5 is turning the character into someone we hate, Season 6 will be so kind to her that it'll be absurd.

Why? Because Ryan Murphy wouldn't let the series end with a sour taste in our mouths regarding Rachel Berry — she's his crown jewel, after all. (Unless he's setting us up for that Rachel spin-off, but we're not even going to go there.) If Rachel's going to bulldoze her way through all of her friendships and demolish them by being the biggest diva monster of all time, there's a strong chance that she'll get knocked down a few pegs before Season 6. And there will be just enough time left in the series for Murphy to do right by the character before Glee takes its final bow.

Who knew Rachel had it in her to finally send Kurt off the deep end? They've been best frenemies since the show began and since their big move to NYC, they've become each other's only real friends. It would only make sense for Murphy to make Rachel fall so far right now so that he could build her up later to end the series on a high note. Unless, for once, Glee's really going to turn the tables on us and instead of the now-impossible fairytale ending Murphy originally envisioned, we're going to be left disliking Rachel and much as annoying Tina Cohen-Chang.

Who are we kidding — that would never happen.

More like this
Why That Kate Bush Song Is Perfectly Suited For Max In 'Stranger Things'
By Gretchen Smail
Will Shoresy Get A Season 2? What To Know
By Kadin Burnett
What Does Michael Peterson’s Family Think Of 'The Staircase'?
By Arya Roshanian
Jennifer Aniston Joked About Ending 'Friends' With Therapy & Divorce
By Grace Wehniainen
Get Even More From Bustle — Sign Up For The Newsletter