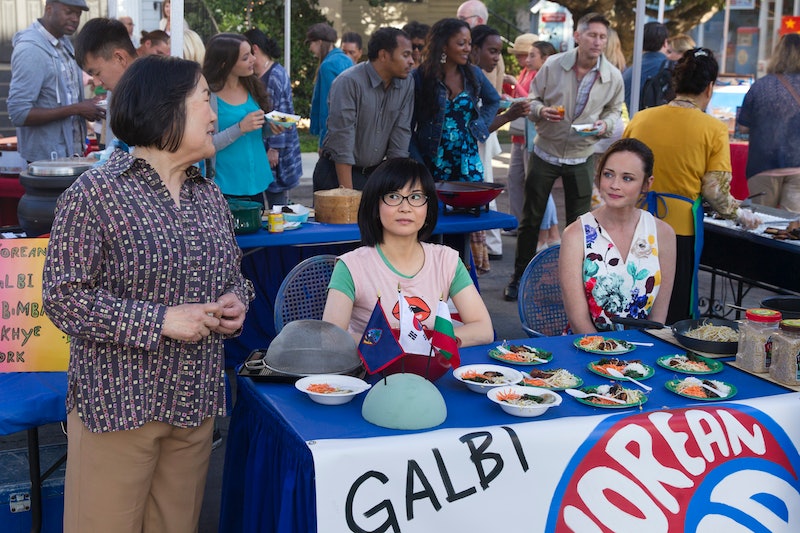 Something that has always been so fascinating in the world of Gilmore Girls is the character of Lane, her relationship with her mother, and the way these two were presented to the world. Interestingly, Lane Kim is based on Amy Sherman-Palladino's longtime friend, Helen Pai, who also served as a co-producer on the show. It was Pai's own life experience that became the starting point for creating and understanding Lane. For Keiko Agena, the way in which Lane and Mrs. Kim were shaped on the series is so important, especially when it comes to understanding representation on-screen. During Agena's Reddit AMA on the Gilmore Girls page on Friday, the actor was asked whether she believed that the representation of Asian individuals and Asian families as a whole was fair. She replied,

Emily [Kuroda] and I are both Japanese, but the character is based on a real life person and her experiences being raised in a [Seventh] Day Adventist Korean household. Um... as far as it is "fair" representation, that's tricky. I think it is an example of taking an inspiration and pushing it to extreme lengths for comic effect... I think that it was funny.

While throughly pragmatic, it's interesting to see that Agena overall feels that her portrayal of Lane and Mrs. Kim wasn't stereotypical. Even though Lane was, by all accounts, a typical early '00s teen, Mrs. Kim's representation on the show is perhaps easier to filter through Agena's distinction. In many ways, it's true Mrs. Kim was not stereotypical, despite her pronounced accent — if only because Gilmore Girls went out of its way to not pin every harsh remark or irrational action to Mrs. Kim's race.

Additionally, Agena made this important comment on Asian representation:

But I do think that because there isn't a lot of Asian representation out there, it does place a burden on the shows that portray an Asian character to be very accurate. I hope that people would find things that they liked in these characters. I've always said that it isn't an accent that makes a character stereotypical, it's whether or not you are showing a flattened version of them.

She continued, "I would hope that people that really followed the show got to see many dimensions from both Lane and Mrs. Kim. I'm not sure if they felt that way... but I certainly felt that we were real people." The distinction she makes — in regards to representation and fairness, that the flatness of a character is directly related to how unfairly a character of color is portrayed — is also important to note.

While Lane and her mother had a relationship fundamentally shaped by their religion and the intergenerational conflict of expectations tied to certain racial stereotypes (e.g. Mrs. Kim wanting Lane to date or marry an Asian man), the two women were given enough room to breathe and be fleshed out. They were aware of and deeply tied to their Korean roots, but they were not pigeon-holed by it. Instead, they're dynamic.

In this way, Gilmore Girls — while the original was overall a rather white show, in terms of racial diversity — did right by its portrayal of Lane and Mrs. Kim. It's not difficult to agree with Agena's observations on the fairness of Asian representations on Gilmore Girls, even to the casual viewer. What we should focus on, and find ways to dive more meaningfully into, is how there can be better Asian representation in film and television in general. Despite ABC's Fresh Off the Boat proving to be a commercial hit, fair and accurate Asian representation in television and film still has a long way to go.