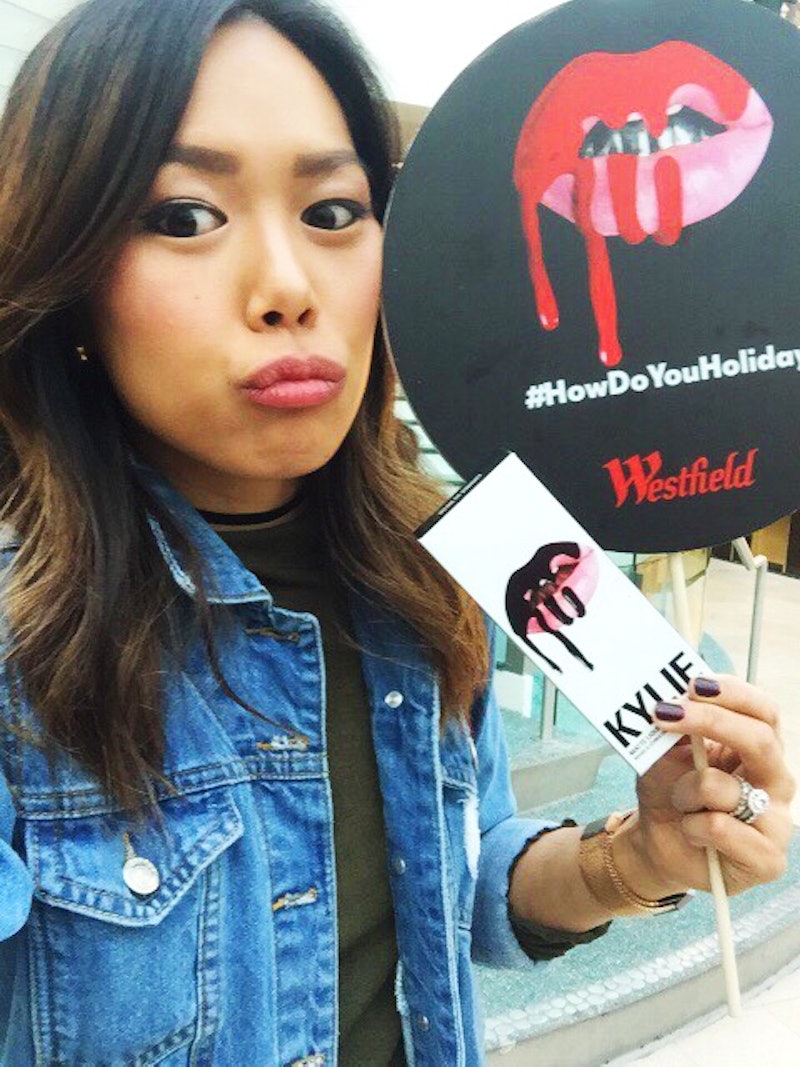 Kylie Jenner has officially done it. I mean, I've always sort of known, but seeing hundreds upon hundreds of fans wrapped around each other in line to get inside the Kylie Pop-Up store at Westfield's Topanga mall — that's what really confirmed it for me: Kylie Jenner is a huge f*cking deal. I've seen her at various events before where she's walked the red carpet or made a brief appearance, but this is different — these folks here are Jenner's people and they prove to me she was a modern phenomenon. These are her followers who watch her endless Snapchats of puppy kisses and lasagna-making and shoe-fittings. These are the young women who have flown from all parts of the world just so they could shop their favorite Lip Kits and now, Kylie-emblazoned merch in real life. These Kylie Jenner devotees would literally do anything for a piece of the 19-year-old's so-called empire, and she built it. So they came.

The last two years have been pretty insane for the reality star-turned-entrepreneur. She created an app (which became the number one most downloaded app in the Apple store), graced the covers of Elle, Allure, and Cosmopolitan, worked on a fashion line with sister Kendall Jenner, and even "co-wrote" the second book in their YA series, Times of the Twins (oh, you didn't know she was an author, too?) But none of these accomplishments are why masses of people ventured deep into the valley — myself included — on this crisp California morning. We are all here to witness the launch of Jenner's first Kylie Cosmetics pop-up and see the offerings of her new merchandise line, The Kylie Shop.

The bad news? I can't get inside. No press was invited to preview the shop, or even stand anywhere near it. All I can see is the storefront from afar and its windows covered in Jenner's signature black and white drip pattern, which prevents passers-by from sneaking a peek. It's apparent this event was made solely for her fans, and for her fans only. If I wanted to get in, I'd have to wait in line, like the rest of them. The only problem was, I got there at 10 a.m. on Friday (around the time the shop opened). The first people in line arrived at 7 p.m. — the night before. In fact, by the time I found the store, they had already closed the line, which, by the way, wrapped around for yards and yards, taking up the near entirety of the mall's first floor.

The good news, however, was that there is plenty of stock for the devoted fans who had been waiting for hours, wristbands around their arm, huge, albeit sleepy smiles on their faces. Each customer could only shop the store for 15 minutes and purchase a max of three of a single item — a smart strategy for a brand that frequently finds itself on the receiving end of disappointed fans when a new product sells out in a matter of minutes.

"I want to be like her some day," a 19-year-old shopper tells me as she inches closer to the front of her roped-off queue. "She's so ambitious and she's going to get her dreams out there — she's going to get done whatever she wants, and that's cool." She wasn't the only young woman who felt this way. There are many who believe the only reason these girls sacrificed sleep and money was to shop Kylie's limited-edition glosses and palettes — they'd be dead wrong.

"She's so humble even though she came from a big, famous family. She likes to do her own thing. She started a business and is making so much money. I haven't met her personally, but she seems like a really nice person," says Becca, a 19-year-old Los Angeles native. Her friend Nadia, 18, chimes in: "She's just like one of us. It's really cool that she's so young and she has a lot going for her."

Glosses, Metals, and Kyliners aside — Kylie Jenner is a full-blown role model, y'all. You might see her as nothing more than a mere social media star, but to these fans and many others (100 million to be exact — that's how many combined followers she has), Kylie Jenner is an inspiration. An aspiration, even.

After an hour passes, I come to terms with the fact that I wasn't going to get the "Like, Realizing Stuff" shirt I wanted (ugh) and decided to head home. That's when I hear the crowd begin to chant, "Kylie! Kylie! Kylie!" And then boom — cries and shrieks erupt, traveling from all corners of the mall. Security guards guide a mass of flashing camera lights towards me — Kylie has arrived. I shuffle across the floor to catch a glimpse and am nearly trampled by her entourage.

Standing next to her is Kris Jenner, whose oversized black sunglasses almost cover her entire face. Her best friend, Jordyn Woods, follows closely behind. Jenner waves at her fans, flashing a smile as she pushes her flowing black locks away from her face. They quickly move by me and make their way inside the Pop-Up. I can barely hear myself think. People are screaming and are near tears — it's a sight I imagine is similar to when people are in the presence of the Pope.

Minutes later, I see the girls I spoke to earlier exit the store, large metallic silver shopping bags flanking their sides. They are beaming. I know it's not just because they scored the Posie K Lip Kit they set out to get or because they're delirious from getting to the mall at 6 a.m. I can safely assume it's because they shared a real, tangible moment with their idol herself. It's a sweet moment to see, one I'm sure they'll never forget happened — even if they didn't manage to document it on Snapchat or Instagram.

More like this
Kylie Jenner Goes Into Labor & Welcomes Her Baby On 'The Kardashians'
By Jake Viswanath
Does Valentino’s Twin Liner Live Up To The TikTok Hype?
By Olivia Rose Ferreiro
15 Talc-Free Makeup Brands For Safer Eyeshadows, Powders, & More
By Audrey Noble
Glitter Eyebrows Are The Y2K-Style Makeup Trend Going Viral On TikTok
By Paris Giles
Get Even More From Bustle — Sign Up For The Newsletter