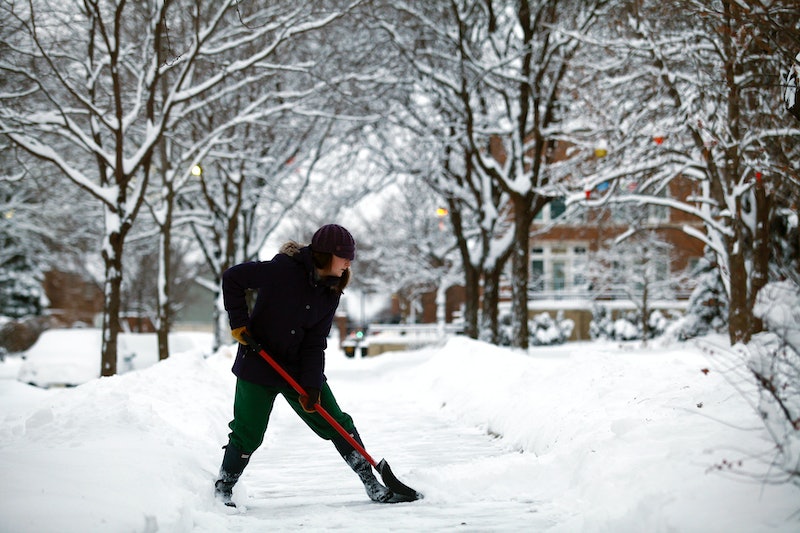 It's hardly mid-December, but there's already a polar vortex on the horizon. I mean, we couldn't let 2016 end without at least one more catastrophe, right? Anyone living in certain western and Midwestern states (Montana, Colorado, North and South Dakota) may already be feeling the effects of this year's polar vortex, where temperatures dropped as low as 14 degrees below zero on Thursday morning. Yesterday, the Great Lakes region was affected, and on Sunday, snow is expected to spread from the Great Lakes to the Northeast, according to Weather.com. Basically, winter is coming, you might get holed up in your apartment for a while, and you don't want to go into this unprepared. Luckily, I've come up with a list of things to help you survive the polar vortex.

I'm no stranger to polar vortexes — I lived through the great polar vortex of 2014 and the one before that, in 2010 (that was affectionately dubbed "Snowpocalypse"). I was living in Atlanta at the time, which I feel makes me even more qualified to speak on the topic of snowstorm survival, because unlike in the Northern cities, Atlanta completely shuts down in the presence of snow and you cannot go anywhere. I'm sure you've heard the rumors. Polar vortex preparedness is, therefore, essential. So before you settle in, make sure you've got these items on hand.

"If you have not gotten your hats and gloves and scarves out yet ... this is the time to do it," the weather service said, according to USA Today. I don't really know how anyone could have made it this long without breaking out the winter essentials, but if you're impervious to the cold or something, now's the time to get yourself a beanie, scarf, and gloves.

Another obvious one, but don't sleep on getting a comforter. Anyone see what I did there? Although I couldn't find concrete evidence that power outages are expected, it's always a possibility, so best to have some extra blankets on hand in case your heating fizzles out on you. Yep, it's blanket fort time.

It's always a good idea to keep a gallon jug of water on hand in case your pipes freeze. Which, by the way, you can help prevent by letting your faucets drip.

Although similar in atmosphere configuration, this year's polar vortex isn't expected to be as bad as the one we had in 2014 — mostly because it's early in the season and we haven't had snow accumulating on the ground. So you may not be holed up at home for days on end without electricity, but still, it's always a good idea to have a flashlight and fresh batteries ready, just in case.

These were always the first items to clear out of the supermarket in the days before a polar vortex in Atlanta. I guess because peanut butter sandwiches are an easy meal to make that has protein, carbs, and doesn't require cooking? And the milk because you need to wash it all down somehow? Honestly, I can't explain the milk. I can only report on what I experienced.

Remember books, those things on paper you read? I know — what a throwback. In all seriousness, grab a couple of books before the polar vortex hits. You can't rely on your TV, phone, or laptop for all your entertainment if your power goes out. This is also where the flashlight comes in — see? It's all coming together.

7. Deck Of Cards Or Board Games

I went over to my friend's house during the 2014 polar vortex, and it was a struggle to think of things to do that didn't involve use of electronics. Thankfully, we found a deck of cards so we were able to amuse ourselves, but if we hadn't? I'm not sure what we would have done. I mean, you can only sit in a room and chat for so long. You never really think of ways to have fun without electronics until you're not able to use them, which is why I'm telling you now to acquire some games that don't need to be plugged into anything.

This is not recommended by meteorologists (as far as I know), but it is my personal recommendation. I have survived many a snowstorm on pizza bites alone. Nutritious? Definitely not. Delicious? Absolutely. You can sub pizza bites for some other frozen junk food, but just know that I'm judging you a little.

The absolute worst time to run out of tea, hot chocolate, cider, etc. would probably be in the midst of a polar vortex. Don't let this happen to you.

10. Wine And A Corkscrew

Imagine this nightmare: You're all cozy on your couch in your onesie pajamas, and you go to your kitchen. "Man, I really wish I had some wine right now," you mutter to yourself, thoroughly searching each and every cabinet for some hidden bottle you may have stashed away somewhere. Alas, there is none to be found because you didn't plan ahead. Or worse: You procured some wine, but you don't have a corkscrew! The horror! But you don't have to live through this nightmare, because I'm here to warn you of the dark times ahead. Obviously, if you're not a wine drinker, you can ignore this item — but if you foresee yourself wanting to indulge in a glass of vino, act now.

More like this
How To See The Lunar Eclipse On May 15-16, 2022
By Kaitlyn Wylde
The 6 Best Air Conditioner Alternatives
By Vanessa Spilios
The 6 Best Balaclavas To Keep Your Face, Head & Neck Comfortably Warm
By Jenny White
If Your Refrigerator Is A Mess, These 25 Organizing Products Can Help
By Courtney Young
Get Even More From Bustle — Sign Up For The Newsletter