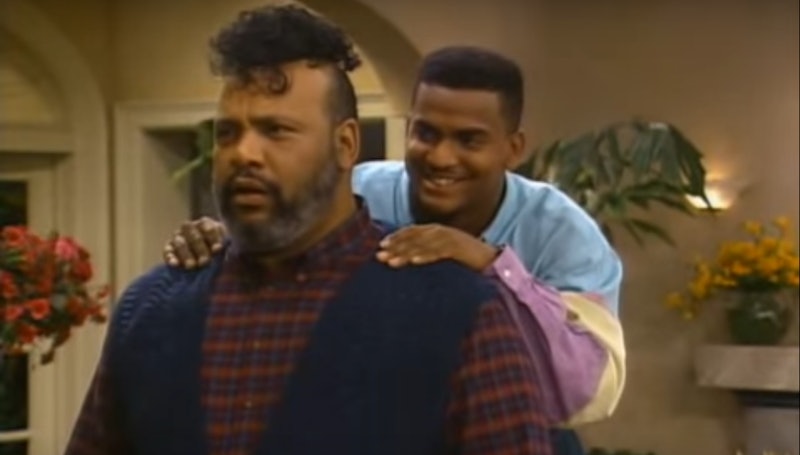 I know that this is hardly Vampire Diaries or Gilmore Girls territory, and that Fresh Prince of Bel-Air isn't a show that I need to pick teams for, but dammit if I'm not Team Carlton all the way. Throughout Fresh Prince, it always seemed as though the character was pitted against his cousin Will for just about everything — for dates, academics, banter, dance moves, and even jokes. But as some of Carlton's best moments from Fresh Prince prove, there's absolutely no contest. In my humble (and totally correct) opinion, the character was clearly the true star of the show, and though it's close to call, Carlton is funnier than Will on Fresh Prince, too.

Part of Carlton's appeal lies in the fact that he's so very different from just about every other member of his family. He's overly conscious of, and delighted in, the inherent privilege of his wealthy life, and as such, he has a monumental lack of understanding of the world — which is pretty hilarious to witness. Plus, wow, he had some amazing dance moves. Seriously.

But it doesn't just come down to how funny he is. If you look at how Carlton changed between the pilot and final episode of Fresh Prince, you can also see how he grew, becoming more confident and, well, less of a jerk in general. Thanks, in great part, to the positive influence of Will. Throughout that transformation, Carlton happened to learn some rough lessons, all of which he dealt with in ways that (pass the tissues, please) felt truly real and heartfelt. Make no mistake, folks — Carlton was the true gem of Fresh Prince, and here are all of the moments that prove that.

1. When He Became A Stripper To Recoup Some Gambling Losses

Only to be caught in the act by his own mom. Oh, the many horrors of that scenario.

2. When A Major Freakout Strayed Way Into The Deep End (& Broke The Fourth Wall)

Setting an unrealistic precedent for all other moments of overblown anguish in numerous sitcoms to follow.

3. When He First Let His Tom Jones-Loving Flag Fly

And it was truly a beautiful, life-changing moment. Raise a lighter in tribute to this heartfelt moment, people.

4. When He Laid Down Some Serious Moves At Soul Train

Starting out with the classic Courtney Cox at a Bruce Springsteen concert arm swing, before launching into some tap dancing and a truly fierce Michael Jackson finale.

5. When He Finally Got To Sing With His Personal Hero

Be right back, I need to start an online petition begging for a live cabaret show starring these two together.

6. When Carlton Got Emotional Over A Cereal Advert

Seriously, what a wonderfully sensitive gem of a man. He never got over that poor rabbit being called silly and told that "Trix are for kids," just as I never got over his trauma of that sentiment.

7. When He Prepared A "Special Medley Of Songs" For His Aunt Janice's Wedding

Aunt Janice's choice of husband was very ... tall, if you remember.

8. When He Was Turned Into A Delightful, Dancing, Chuckling Mess At The Dentist

In front of William Shatner, no less. And sure, cousin Will is pretty funny in this scene too, but it's Carlton who steals it. I lose it when that giant tooth comes into play.

9. When He Had The Perfect Response To Being Unfairly Denied Entry To A Fraternity

Carlton had some of the most endearing and powerful speeches of the entire show, and this one was an especially significant reminder of that fact.

10. When He Showed The World His Christmas Stocking Celebration Dance

This Christmas, be sure to bring your very own Carlton dance out every time you feel full of festive cheer. It's the new kissing-under-a-mistletoe, I tell ya — dancing-in-a-Christmas-sweater.

11. When He Thought A Bunch Of Flowers For Ashley Were From His Secret Admirer

No, but seriously, once that dating service thing finally kicked in, I'm sure he could barely move for all the flowers and gifts from enamored secret admirers, right?

12. When Carlton Tried To Turn "Gangster," But Looked More Like A Pirate

Though ridiculously funny, there's still something incredibly sweet and inherently heartbreaking about this scene, which stings my overly sensitive little heart every time I watch it.

13. When Carlton Started Glowing After Being Gifted Will's Almighty "Chicktionary"

14. When He Had A Perfectly Valid Response To His Scary Workout Regime

Ladies and gentlemen, you would cry too if it happened to you. But also, who hasn't had this response at the gym? Totally valid.

15. When He Tried To Bring A Little Bit Of Pizazz To The Church Choir

He totally schooled little sister Ashley on the art of performance with that soulful number. And I for one feel completely lifted by it.

16. When He Thought He Got Hired By A Company Due To Their Body Language

Note to self: If a potential employer gives you the "wink and a gun" during a job interview, it does not indicate that you've been hired.

17. When He Encouraged Phil To Try On A Set Of Toupees To Look Hip And Young

And all I have to say to that is, a-wop-bop-a-loo-bop-a-lop-bam-boom. While laughing. Heartily. For all eternity.

See? Carlton was an absolute gem. He was a gentleman, singer, dancer, Tom Jones fanatic, sterling academic, and profound speech giver — and he's totally the secret Fresh Prince of the entire show.

More like this
10 Eurovision Moments That Celebrate The Weird & Wonderful Camp Extravaganza
By Sam Ramsden
Stavros Flatley's Lagi Demetriou Is A Dad Now & Wow, I Feel Old
By Sabah Hussain
Fans Don't Think Kim Kardashian Actually Ate Anything In Her Beyond Meat Ad
By Jake Viswanath
Kendall Jenner Isn’t Ready To Have A Baby Amid Her Mom’s Wishes
By Jake Viswanath
Get Even More From Bustle — Sign Up For The Newsletter