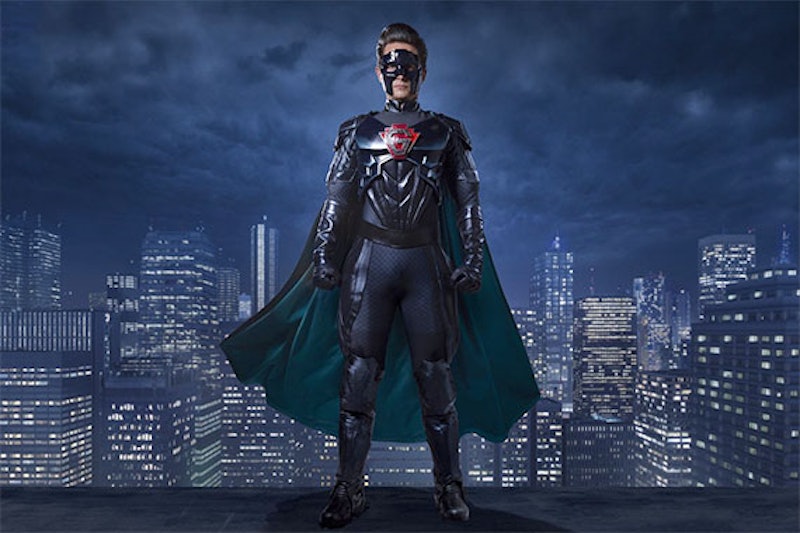 The ghosts of Christmas past, future, and present are all busy this time of year, but The Ghost is a new face ready to make a splash on Doctor Who this Christmas. The Doctor is ready for yet another disastrous Christmas — this time in New York City — and the latest trailer for the Christmas special focuses on a superhero named The Ghost, who might just give the Doctor some serious competition in the saving the world department. Played by Justin Chatwin of Shameless fame, The Ghost in the Doctor Who trailer is a mysterious caped hero whose talents include rescuing journalists and being maddeningly vague about his intentions.

I wish I could tell you the new trailer revealed all, but the Doctor's latest friend (or is he a foe?) is all about being mysterious. The episode is titled "The Return of Doctor Mysterio," which besides being a wonderfully comic book style name, also suggests Doctor Mysterio is someone who the Doctor has met before. The Ghost could actually be Doctor Mysterio. So little is known about the caped crusader at this point anything is possible.

Between the trailers and the tiny bits of information the BBC has parceled out, it appears the Doctor, his temporary companion Nardole, The Ghost, and reporter Lucy Fletcher are all that stand between New York City and an alien attack. Given how similar The Ghost is to Superman it is impossible not to wonder if he is an alien himself. Time Lords are not the only aliens out there who share a striking resemblance with humans, maybe The Ghost comes from a planet where flying and saving the world are as commonplace events to him as time travel is to the Doctor.

The Doctor is usually the only superhero the universe needs, so seeing him come face to face with a traditional superhero is going to be hilarious. In the trailer, the Doctor and The Ghost exchange names, and the incredulous look on Peter Capaldi's face when The Ghost states his moniker is priceless. Doctor Who Christmas specials vary widely in tone, but I think it is safe to say this one is more comedy than anything else.

No matter who or what The Ghost turns out be, Chatwin is clearly having a ball playing a Superman/Batman hybrid alongside Capaldi's Doctor. Mixing a bit of superhero action into the already endlessly strange and wondrous world of Doctor Who is going to be an amazing Christmas gift to the fans. Come for the mystery of the masked vigilante honing in on the Doctor's hero territory and stay for the exciting romp that is sure to follow. Doctor Who always delivers the best Christmas specials, and this year's is sure to keep the tradition going strong.

Doctor Who: The Return of Doctor Mysterio airs on BBC America Christmas night.