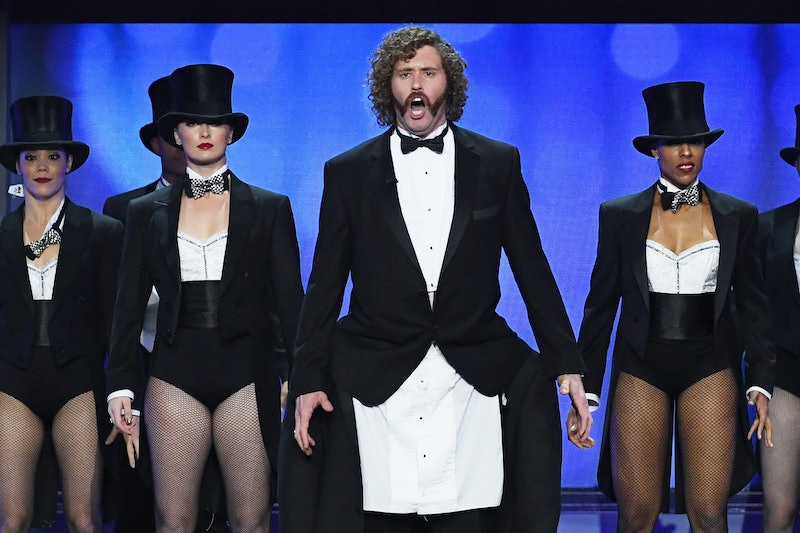 T.J. Miller was a great host of the Critics’ Choice Awards in 2016, so why not have him back again? That’s what the producers decided to do, and he brought his special brand of humor and craziness to the 2017 Critics’ Choice Awards? Of course, this year is different than other years in that we just elected a reality star to be the next President of the United States. Obviously, Miller wasn’t going to let that one go. But instead of commenting (well, commenting a lot) on President-Elect Donald Trump, T.J. Miller preached unity at the 2017 Critics’ Choice Awards, and it was a light-yet-effective way to start things off.

Miller started off with the regular song and dance (literally, as he did a little number from A Chorus Line), and then broke it all off, saying, “Seriously? I’m telling all these silly jokes, and all I want to do is talk about what’s going on in the world. The problem is I hate when celebrities get on their soapbox, you know, and tell us all how to live.” Miller continued, “They use their little bit of Yogi Bear 3D fame just to use a platform to tell us all how to live… Don’t tell the rest of us how to think! Just tell your jokes!” Now, I thought Miller was going to all talking about Trump on us, but he didn’t — he snuck in a joke about how trolls did really well this year, and he wasn’t talking about the Justin Timberlake. He was talking about how one became President. Instead, Miller focused on how Americans can help bring our country back together. He even snuck up television jokes in. In his monologue, Miller said:

“We are not a nation who is divided. We’re a nation that is broken, okay? And anything that is broken can be fixed. This is an opportunity — we need to see it as something positive. Opportunity with an emphasis on unity. Everyone is fighting nowadays, okay? But TV and film can bring us together. TV especially, because we are one nation, one couch, one potato. But this is us, all of us, okay? A modern family. The people versus O.J. Simpson. Movies can bring us together. We can argue until we’re blue in the face about whether or not all the jobs that [Trump] is promising to come back are going to be automated in two or three years, but as soon as somebody mentions Jason Bourne, we’re like, ‘Yeah, I love Jason Bourne! Do you love Jason Bourne? Yeah, I don’t care who you voted for! Isn’t it crazy he’s always running through the marketplace or down hallways? Where’s he going? Who knows?’ So, let’s not be upset tonight.. Let’s all agree — and I agree — not to be upset until next year. In February. At the Oscars. So, can we all agree to have a good time tonight?”

I think we’re all a little sick of talking about politics at this point (I know I need a little break), and I think Miller tackled the subject with humor and grace. The Critics’ Choice Awards is the first award show of the season, so it wasn’t like he couldn’t say anything about what’s been going on in our country. Miller touched what could have been a tired and overwrought topic and made it funny through telling the truth. How is it the truth? Everyone can talk about Jason Bourne and how he gets himself into Bourne-ish situations, that's for sure.