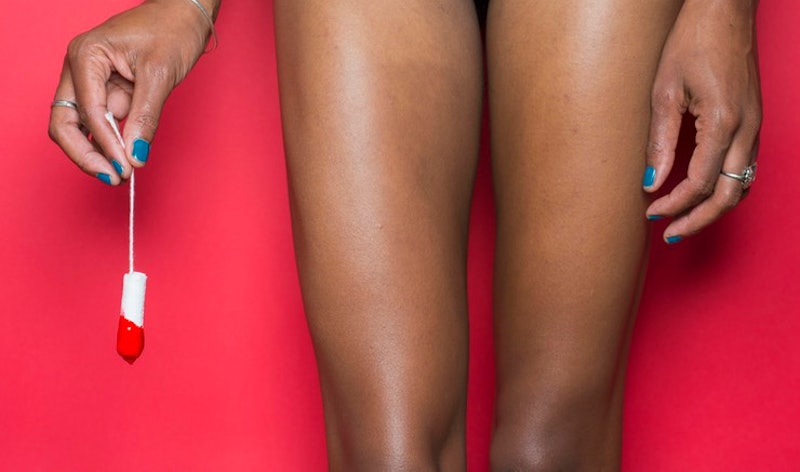 Though menstruation is a perfectly natural part of female life, many feel the need to obscure or conceal them through the use of euphemisms and other code words to talk about periods (think, "that time of the month," "the crimson wave," or the dreaded "Aunt Flo"). And this is true for cultures around the world — a study released in March 2016 found over 5,000 period euphemisms in languages worldwide, as well as a widespread tendency to use idioms or metaphors rather than straight-up words like "period" or "menstruation." The survey, mounted by the German health company Clue and the International Women's Health Coalition, found that many countries spoke about periods in euphemistic terms a whopping 91 percent of the time.

While some of this is linguistic fun, of course, most use of period euphemisms is about societal discomfort: many people still view a perfectly healthy and normal physical process that happens to half the planet at one point in their lives as something disgusting and distasteful that can't be talked about "politely." And, as we'll see, some countries have such menstruation taboos that even their euphemisms get a bit twisted.

The study by Clue isn't the first foray into this area: the Museum of Menstruation, for instance, has been crowdsourcing euphemisms from different languages around the world for years (and is an important source for this article), and the American academic Virginia Ernster published a famous 10-year study of euphemisms among American adolescents back in 1975. One of the most interesting things you discover in period-euphemism study? A lot of them are individual, confined to particular families, groups of friends, or communities. There are some that are more common than others, but, largely due to the "hidden" nature of periods, a lot of the language we use to discuss them worldwide is unique and idiosyncratic. It's also sometimes difficult to understand outside of them: R.W. Holder, in the Oxford Dictionary of Euphemisms' section on periods, notes that "my usually erudite American correspondents have yet to tell me why an American female may 'fall off (the roof).'" If you do understand that one, let me know, would you?

This one's kind of sweet, in its own extremely odd way. Communism, of course, was symbolized by the color red, and a "lysthuset" is a kind of summer gazebo or "funhouse," so this is likely a reference to a mean red force taking up residence in a place and obscuring its normal pleasurable pursuits.

Anne, in this case, means Anne Frank, whose diary remains incredibly popular in Japan. It sounds messed up, but Anne Frank's diary is celebrated in Japan for its frank discussion of periods. A Japanese company even released tampons called "Anne" in the 1960s, and referring to your first day of flow as "Anne's day" appears to be, if not widely done, then at least not unusual.

The idea of the beginning of your period as one of floral blossoming and blooming is very, very old. While this Finnish euphemism is modern, medical texts in the Middle Ages can be found referring to the period as "bringing on the flowers," which is sweetly botanical considering that doctors at the time had little or no understanding of what was actually happening during the monthly menses.

Your guess on this one is as good as mine. Research on traditional Chinese symbolism indicates that apple blossom may be tied to female beauty, but this might not have anything to do with periods. And apple bread doesn't necessarily seem to be a traditional food across China (though do contact me if I'm wrong and you have an ancestral recipe and/or some explanation for what this has to do with menstruation).

This one was collected by the anthropologist Natalie Joffe after World War II, and was used primarily by dudes. It doesn't have anything to do with actual baking: it's a reference to the naval semaphore alphabet, where B is denoted by the word "baker," uses a red flag, and denotes "keep off" and "beware." Charming.

This one is just a very basic pun: the German word for red is "rot," so a relative from "Rotenburg" is basically a reference to a crimson visitor.

India: "The Crow Has Touched Me"

This particular euphemism has its roots in the practice of menstrual seclusion, which keeps women separate from men, holy places, cooking areas and other potential places of "contamination" during their periods. It's practiced in different ways across the world, from Nepal to Nigeria, but the Indian version often focusses on the necessity that menstruating women don't prepare food because they're "dirty and impure," according to a 2015 scientific review of the problem. The notion of being "touched by the crow" refers to this concept, where women need to be segregated and kept away from food for fear of causing illness.

Anybody who has ever dealt with getting the stain of beetroot out of anything will sympathize with the appropriateness of this one. The Clue study found that culinary metaphors are actually quite common: alongside Dutch beets, in Spain you could call it "descongelar el bistec," defrosting the beef steak, while the French say "les carottes sont cuites," the carrots are cooked. That last one, though, is less about carrots and their ruddy color than the fact that carrots, once cooked, can't be altered; the course is set and can't be changed.

Why the French would like the idea of a small clown with a bloodied nose residing in their underpants remains unclear, but it's certainly a very evocative image.

No, not the Friends actor. Commodore Matthew C. Perry of the United States Navy arrived in Japan in 1853 to force Japan to open up its trading with the US; for the previous 200 years, Japan had been largely closed to the rest of the world, with exceptions for certain trading ships. The arrival of Perry in Tokyo harbor was the cause of huge upheaval in Japanese society and changed its history forever; as a relevant cultural metaphor for a significant event that creates chaos, you can't really get better than that.

Leave it to the Romance languages to come up with something far more evocative and charming than just "the monthlies" or "red week." Having your red balloon seems somehow much more exotic.

It's pretty self-explanatory, but it's also pretty adorable, considering all the talk of Communists and invading Commodores. According to the Museum of Menstruation, similar references to jam and berries are found in Finnish, French (where it's "the season of strawberries"), and throughout South Africa.

Traditional Chinese: "The Red General Has Grasped The Door"

This one was sent to the Museum of Menstruation by an expert in traditional Chinese, and it's interesting to wonder whether the general is meant to be creating a problem within, or keeping other people out...

This is another of the anthropologist Joffe's discoveries from the 1950s, and it's excellent for the singular reason that you can hum "In The Hall Of The Mountain King" while you've got your period and nobody without a background in Yiddish could understand why.

The French have had a poor relationship with England for most of their history, but it doesn't seem that this euphemism relates to bloodshed on the field of war. Instead, English soldiers turning up in France for the Napoleonic Wars and other skirmishes usually wore red coats, just as they did in the American Civil War. Something undesirable and attired in red turning up regularly and causing trouble? Seems accurate to me.

More like this
The Best Time To Date After A Breakup, According To Experts
By Bustle Editors
What Is The Forest Personality Test? The TikTok Trend, Explained
By Georgina Lawton
Are Leo & Capricorn A Good Match?
By Kristine Fellizar
The 9 Best Exercises For Period Cramps
By Carolyn Steber
Get Even More From Bustle — Sign Up For The Newsletter