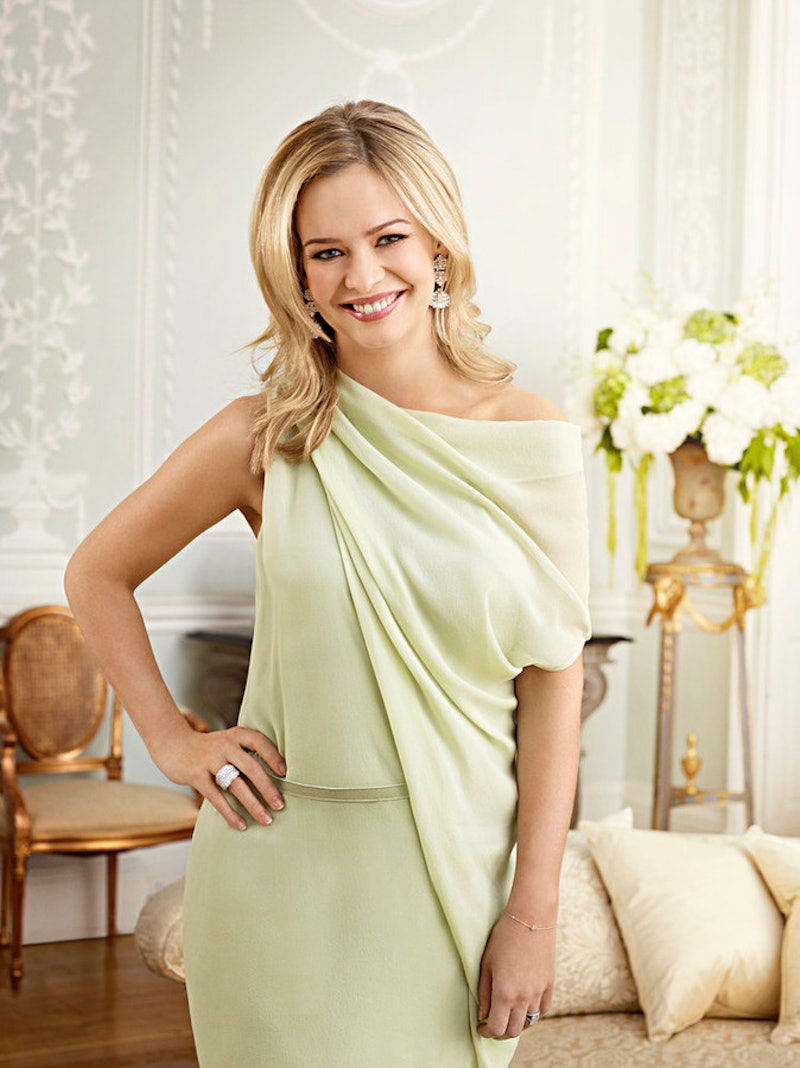 The Ladies of London stars have had a lot of ups and downs, but when it comes to Marissa Hermer's relationship with Juliet Angus, their friendship is non-existant — and that's how Hermer prefers it. "We have tried to mend our relationship several times," Hermer tells Bustle. "There’s so many times you can fix a broken relationship. I don’t care anymore and I wish her the best. Bon voyage, that’s it." In the first two seasons of the Bravo series, Hermer and Angus' friendship seemed to have more bad moments than good, and it appears that's how it will continue in Season 3.

"Through this season, I experience her picking several different fights with me and actually it’s been going on for years and I sort of had had enough." What has made the drama, especially with Angus, even more unimportant to her is all of the difficulties Hermer went through during her third and last pregnany with daughter, Sadie. She explains,

"I think going through this experience with Sadie and this pregnancy, I really don’t have any time or interest for anymore drama in my life. I’ve had enough in the hospital room. I’ve had enough with my doctors. I’ve fought enough fights with my emotional, physical trauma. So having anyone who is constantly picking a fight with me, they’re out of my life. It’s blunt, it’s cold, it’s mean, but it’s sort of self preservation for me."

That doesn't mean there won't be drama between Angus and Hermer during the current season of Ladies. As the An American Girl in Londoncookbook author says, "For the past couple of years, we haven’t really had a friendship. But that’s simply because anytime I start to get close to Juliet, she picks fights. You’ll see this coming up in the season, she looks for ways that anything that I’m doing she puts a spin on it and starts a rumor about it."

Hermer also responded to Angus telling Bustle that she and Hermer experience many "ups and downs" in Season 3 of the reality series. According to Hermer, "I don’t think there are any ups and downs. We’re not friends. We weren’t friends from the beginning of the season. It’s not an up or a down. We don’t have a relationship. That’s how I like it, to be honest."

In November, Angus told Bustle, "I think some of the girls still like to pigeonhole me in certain ways because it’s just easier for them and it makes themselves feel better. I just realized, especially my American friends on the show, they were my closest friends in life and they were comfortable when I was sort of the little sister, instead of having my own voice." She added, "That doesn’t sit with them. What you’ll see is the more I become successful the more they want to put me down."

To that, Hermer says, "It’s ridiculous. Of course I want her to succeed, I really do. To be honest, she’s much nicer and happier when she’s successful." And Hermer doesn't wish Angus any ill will. She says, "I don’t want speak about badly about Juliet, because we, despite our ups and downs and our non-friendship that we have right now, I really do care about her. To quite the opposite of what she said, I really do want her to succeed. I do adore her family." The restaurant owner also admits, "If she ever needed me, I would be there in a heartbeat."

In addition to her drama with Angus, Hermer teases there is even more drama surrounding Caroline Stanbury coming up. Those who have been tuning into Season 3 know Stanbury has already had several heated encounters with fellow cast members. And according to a Dec. 6 Entertainment Tonight interview with Stanbury and Angus, they think the majority of the season is basically a takedown of Stanbury. "I think they took her moments of weakness this year to their advantage, and really tried to bring her spirits down," Angus told ET. Stanbury added, "It is lonely on your own little island on these shows, when you’re completely crucified."

However, that's not how Hermer sees it. In response to their ET interview, she says, "I think that’s utter nonsense. No one wanted to take her down this season." She continues,

"I think her interpretation is that we wanted to take her down. I think what really actually happened is everyone got fed up of her behaving the way that she did and called her out on it. In this next episode, you see Adela [King] say, 'Caroline, you’re acting spoiled.' Now Caroline calls herself spoiled and Caroline was acting spoiled. However, when Adela called her spoiled, Caroline threw a fit."

So far, Hermer hasn't been part of the drama that's happened in the first two episodes, but it sounds like that's all going to change. Clearly, if she had her way she'd avoid it all.

Ladies of London airs Tuesdays at 10 p.m. EST on Bravo.