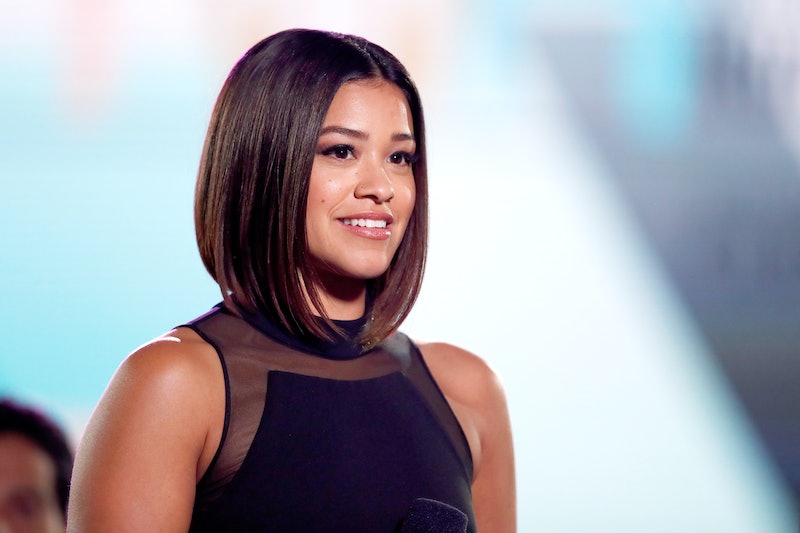 Whenever awards season comes around, the gender inequality present in Hollywood becomes more obvious than ever. Whether it's the lack of women nominated in Best Director categories or the number of Best Picture nominees without female protagonists, awards shows like the Oscars and Golden Globes tend to highlight how much progress Hollywood still need to make when it comes to honoring talented women. Yet while it's easy to sit back and complain about how unfair it all its, one famous lady, Gina Rodriguez, decided that wasn't good enough — instead, she took things into her own hands by co-creating the 1st Annual Young Women's Honors Gala, an awards show airing Dec. 19 that's dedicated to celebrating the achievements of women in a variety of industries.

"I think there’s nothing greater than to make, glorify, and uplift women doing work in fields that aren’t often spoken about in social media or pop culture, that aren’t often tweeted about or Instagrammed about or highlighted," she says, speaking to Bustle in early December. She explains that she and her co-producers wanted to honor young women doing "exceptional work" in areas like coding, education, and philanthropy, with the goal being that for young viewers at home eager to explore those fields, "You can see someone that looks like you in the light that you’ve never seen before."

Most of you might know Rodriguez solely from her work on TV's Jane the Virgin, where the Golden Globe-winning actors plays the titular (now-ex) virgin. Yet with the Young Women's Honors Gala, she also takes on the role of awards show host and producer, and the new project is one that fans of Rodriguez' work on JtV will definitely support. After all, Jane is a smart, motivated, talented young woman who preaches feminism and solidarity — she'd fit right in with the ladies honored by the Gala, a group that includes honorees like the Olympian gymnast Simone Biles and the literacy advocate Fereshteh Forough.

Yet while the ceremony may have been a majorly exciting day for its honorees, Rodriguez says she simply felt "a huge sense of relief" when it was over. "That was the biggest undertaking we’ve ever done," she says, referring to her production team. "That was our first show that we’ve ever produced, and it’s definitely something that’s been in our hearts and the hearts of our partners, as well, for a very long time."

To see the show actually take place was "extremely impactful," Rodriguez adds. "My partners and I were seeing a dream that we had realized." The fact that celebs like Laverne Cox and Katie Holmes came on-board to present to the honorees only made things better. "I was floored to see the outpouring of love, and these women helped me accomplish something very great," Rodriguez says. "They were taking a risk just like I was, they were taking a leap of faith in something they had never seen before, and it could’ve all crumbled, but it was because of their strength that it didn’t, and I owe them so much."

Rodriguez was especially moved by the involvement of Michelle Obama, whom she'd worked with previously thanks to the organization Let Girls Learn, via video message. "That was a huge blessing," the actor says about the First Lady recording the opening statement, adding that as it occurred, "I was just like, I can’t believe this is happening."

Having Obama involved may have been the frosting on the cake, but thanks to Rodriguez, the show, airing Dec. 19 at 9 p.m. on The CW, would've already been the kind of inspiring event that would make even Jane Villanueva as proud as could be.