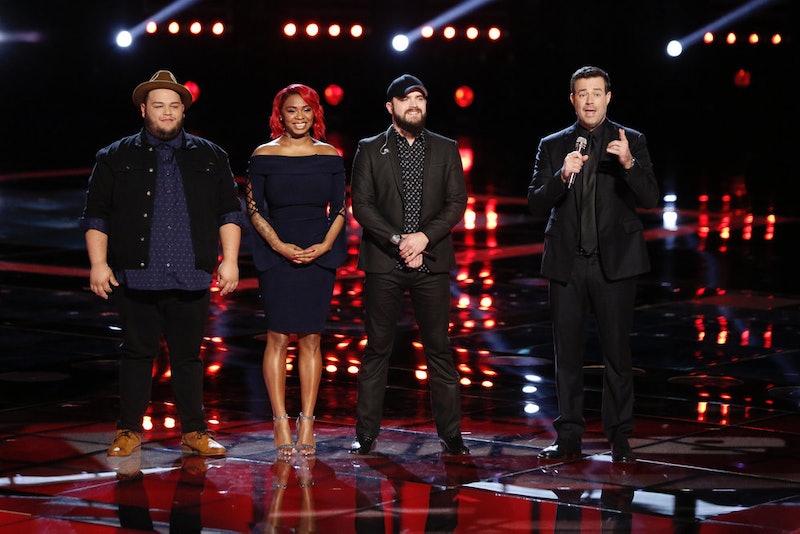 Season 11 of The Voice is just about to wrap up (with a two-hour finale, which I love because it’s mostly just performances), and while it may be premature, I’m already looking forward to Season 12. Though the formula is pretty simple, The Voice is still one of the most popular reality television shows on television. There’s really no end in sight. When is the Season 12 premiere of The Voice ? Fans won’t have to wait that long to find the next singing superstar.

According to E! Online, Gwen Stefani will return to join coaches Alicia Keys, Adam Levine, and Blake Shelton in Season 12 of The Voice. But where’s Miley? Don’t worry — she’s coming back for Season 13, but there’s no word yet on who will be joining her (I bet that Levine and Shelton are safe bets). Oh, and Carson Daly will be the host, because he’ll ever not be the host of The Voice, even though I bet the scheduling does a number when he’s doing double-duty for The Today Show. According to E!, Season 12 will begin in February 2017, and Season 13 in the fall of 2017, so it’s pretty much sticking with the airing cycle of previous seasons — one in the fall to winter, one in spring to summer, and three hot, humid months of sadness in between.

The premise of The Voice is so basic, but it’s so successful. You get a bunch of people that you can’t judge on looks, have them sing for a panel of very experienced musicians, and see what happens next. Oh, and once teams are built for each judge, you bring in other very experienced musicians to mentor the singers until one emerges victorious. My favorite part, though, is the panel of coaches — they change here and there, but each musician brings a little something different to the table. Levine and Shelton are probably never leaving the show (and why would they? It’s a good gig), but here are a few other musicians I think would be a good addition to The Voice either on the coaches panel or as a guest mentor.

All of the coaches on The Voice have been pretty young, and the show saves the older musicians for the one-episode mentoring. What about bringing on an experienced musician like Bennett for the whole series? It’s not like he can’t be contemporary — he just put out a whole scope of work with Lady Gaga — and if anyone can tell stories about the music business, it’s probably Tony Bennett.

Adele is wrapping up a world tour sooner than later, and having seen her show, I can attest that she is hilarious in person (besides crazy talented). Because Adele blazes her own path and doesn’t care what other people have to say about her, I’d say she’d be a great coach on The Voice.

What can’t Justin Timberlake do? He can sing, he can act, he can dance, but can he coach? It’s not like he needs a career resurrection or anything like that, but, being on The Voice would keep Timberlake in Los Angeles close to his growing family. May not be a bad idea.

I’m sure the producers of The Voice have a growing list of possible coaches and guests for the show, but it wouldn’t hurt to have a few more in their collective pocket for the upcoming seasons.