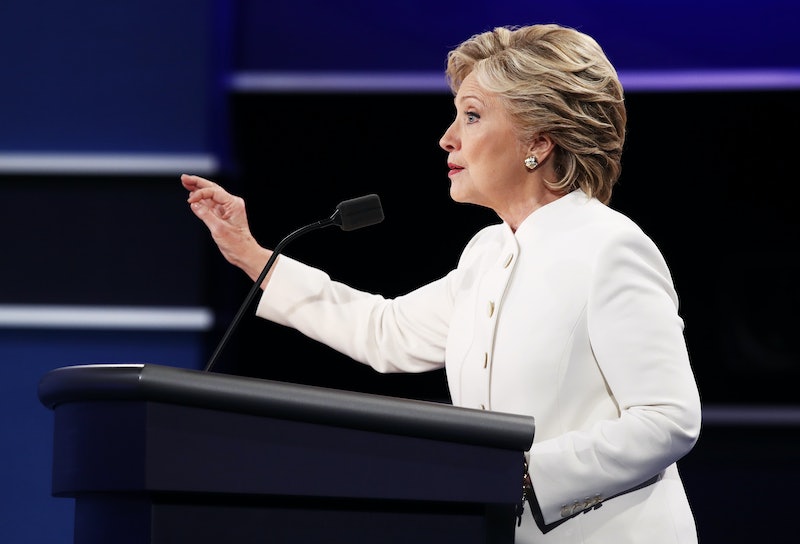 Listen, 2016 was kind of horrible, so picking a best month out of the year is a matter of choosing the lesser of 12 evils. I’d toyed with the cynical choice of January, with an “it was all downhill from there,” attitude — see all the “me at the beginning of 2016 vs. me at the end of 2016” memes — but I think I’m going to make a braver choice and say October was the best month of 2016. It was a month rosy with the last hopes that reason would triumph over insanity, that empathy would rise over hate, and that we might at long, long last, see a woman in the White House. That it would come with the repudiation of a man who espoused sexist, anti-immigrant, and anti-free speech rhetoric was no small consideration.

On the positive side, we got to see Hillary Clinton, our first female candidate for president, stand in front of the nation and declare unequivocally her support for reproductive rights and women’s rights more generally. The moment of the campaign I was most impressed with Clinton may very well have been her response to a question in the third debate about late-term abortion, a passionate defense and explanation as to why preserving a woman’s right to choose is so crucial.

“I’ve been to countries where governments either forced women to have abortions, like they used to do in China, or forced women to bear children, like they used to do in Romania,” she said at the debate at the University of Nevada in Las Vegas. “And I can tell you the government has no place in the decisions women make, with their families, in accordance with their faith, with medical advice, and I will stand up for that right." It was a moving moment but also a heartfelt and, I thought, clear defense of why a woman’s right to choose is so important, illustrating the dangers of any state intervention in a woman’s decision to bear children. I was incredibly proud of Clinton in that moment.

On the negative side, of course, was Donald Trump’s circus of sexual assault allegations (all of which Trump and his team have consistently denied) and braggadocio — starting with the dropping of the Access Hollywood hot mic “Trump Tapes” on Oct. 7, and continuing from there with a cascade of women accusing him of all manner of sexual impropriety. Why include this in what made October good? Because for a hot second there it felt like as a society, we were ready to reject this type of behavior.

Republicans started distancing themselves from their nominee. And while it was slightly maddening to hear (over and over) that these white male GOPers “had wives and daughters” (as Mitt Romney noted) and, therefore, couldn't tolerated the lewd remarks, at least they were saying it. At the same time, we got to see a dozen very brave women come forward to talk about their traumatic experiences. While the Trump campaign painted them with some of their ugliest rhetoric to date. At a rally in Pennsylvania, Trump said "The events never happened. Never. All of these liars will be sued after the election is over."

However, it seemed to me like the rest of us embraced these women, thanked them for their courage, and stated there was no way this poor excuse for a man could become president. Unfortunately, this faith in my fellow Americans' judgment was short-lived.

Still, in the end, Clinton would get 2.8 million more votes than Trump (according to the latest from the Cook Political Report), and lose the Electoral College. Still — October showed that maybe America would be a little better than we’d thought. We were wrong, but it was nice to think while it lasted.

More like this
It’s Official: 'The Bachelorette' Is No Longer A Fairy Tale
By Samantha Allen
The 5 Best Underwear For Preventing Wedgies
By Lisa Fogarty
Beyoncé & Madonna’s “Break My Soul” Remix Honors A Group Of Black Icons
By Stephanie Topacio Long
New ITV Drama Maternal Is Lifting The Lid On Life As A Woman In The NHS
By Catharina Cheung
Get Even More From Bustle — Sign Up For The Newsletter