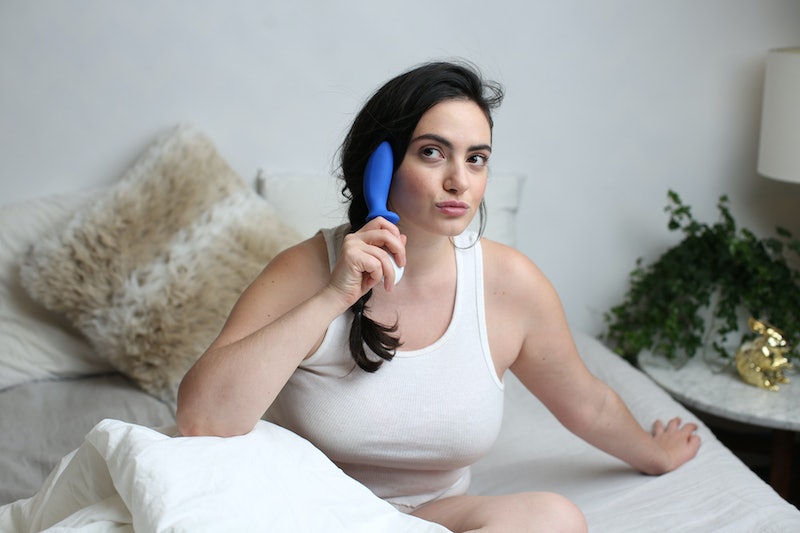 We’re always hearing that we could be having better sex, a better orgasm, or a better relationship. But how often do we hear the nitty-gritty of how we can actually better understand our deepest desires and most embarrassing questions? Bustle has enlisted Vanessa Marin, a sex therapist, to help us out with the details. No gender, sexual orientation, or question is off limits, and all questions will remain anonymous. Now, onto this week’s topic: are vibrators really addictive after all, and what can you do if you feel like your sex life is too dependent on vibrators?

Don’t Give In To Fear

It also seems that your question is hinting at a belief that your vibrator-induced orgasms are somehow “worse” than orgasming at the hands (or mouth) of your partner. A lot of women feel this way. We’ve been socialized to believe that we’re supposed to have our orgasms in certain ways (namely, from penetration only). This even goes all the way back to Freud saying that clitoral orgasms are “immature.”

The Truth About Vibrators

How To Learn To Orgasm In Other Ways

First, let me tackle what you should do if you want to learn how to have other types of orgasms. You’ve had other types of orgasms in the past, and you can definitely learn how to have those orgasms again. Although we’re socialized to believe that female orgasm is “complicated,” it’s absolutely possible to learn multiple ways of orgasming. In the years that I’ve spent coaching women how to orgasm, I have always emphasized learning new ways of orgasming.

It typically takes anywhere from a few weeks to a few months to learn how to orgasm with your hands. I know this can be frustrating transition time, which is why I think it’s so important to get clear on your goals beforehand. If this is important to you, stick with it! Your hand will start to feel better again, I promise. Once you've learned how to orgasm from your own manual stimulation, you can read my guides to orgasming from your partner's touch and from oral sex. I will also be writing another column on learning to receive manual stimulation later this week, so look out for that as well!

Whatever you choose, remember to have fun!