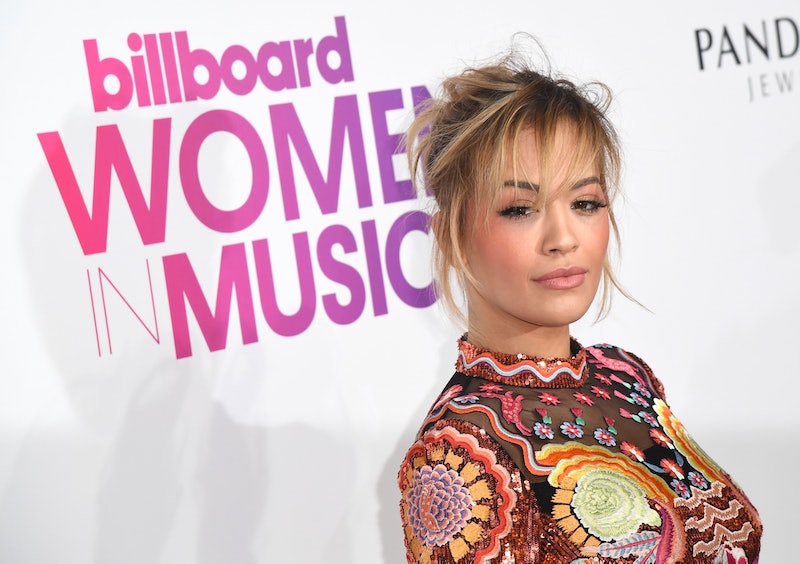 If you tune into Lifetime on Monday, Dec. 12 at 9 p.m., you may be a little confused. The network is airing the Billboard Women In Music special, which is a completely different event than the Billboard Music Awards that aired this past May. The main difference between the two is obvious: Monday night's event specifically focuses on the women of the music industry. But another element unique to Women In Music is that it honors not just the performers who we're used to seeing on stage at awards shows, but the women working behind the scenes to make it all possible. And according to many of the attending stars, that's what makes Billboard's Women In Music so impactful.

"I think that a lot of the time, people don't notice how much work women do in business," Regina Spektor tells Bustle on the event's pink carpet. "This award honors a lot of performers and musicians, which is really amazing, but I feel like they kind of get honored a lot anyway. What’s really cool is I’m here supporting my lawyer, Debbie White." And White, of law firm Loeb & Loeb, is just one of seven female "dealmakers" being honored by Billboard. According to Spektor, it's those women behind the scenes, "the people fighting the fight for fairness," who "keep the fabric business nurturing and caring," but are rarely recognized for their roles.

Though Rita Ora was at the event to honor Woman of the Year recipient Madonna, she sees a similar benefit. "It’s exciting because I think people tend to forget that, when they see the face on the TV, there’s a village behind that face," she says. "And I think that’s why this award is so great, because it honors managers and publishers and people that really help make everything work, and that’s what counts."

While Boy Meets World star and singer Sabrina Carpenter doesn't make a distinction between performers and women working on the business side of Hollywood, she's just thrilled that such an event exists. "It’s so baller," she says. "There are so many women that have just handled life and all of its crazy things that it sends our way with such grace and such class, and then just also blowing us away at every moment. And they’re all creative and they don’t let anybody tell them what to do. To be able to honor such powerful minds like that that are changing our world, and changing our world as females in the industry, is amazing."

Of course, a key benefit to an event like this is the message it sends to young women watching at home. No matter what fields we may aspire to work in, seeing women from across different facets of an industry being recognized for their hard work shows that though we can often be made to feel invisible, we matter.

Shania Twain certainly understands the effect that women can have the on the future generations who look up to them. When asked to choose a single highlight from her career, she doesn't name the Icon Award that Billboard has honored her with, another award, or even a particularly notable performance. Instead, she tells reporters, "Accolades are always… they feel like standout moments for sure, but the biggest compliment I could ever be paid is the compliments of other artists. When I’m here today, it all starts coming back to me, all these young artists who were children when I was really climbing, who admired me or looked up to me, and to them, I’m an icon. To me that is the highlight of my career." And events like Billboard's Women In Music prove that there are many female icons out there, even if you're not familiar with all of their names.