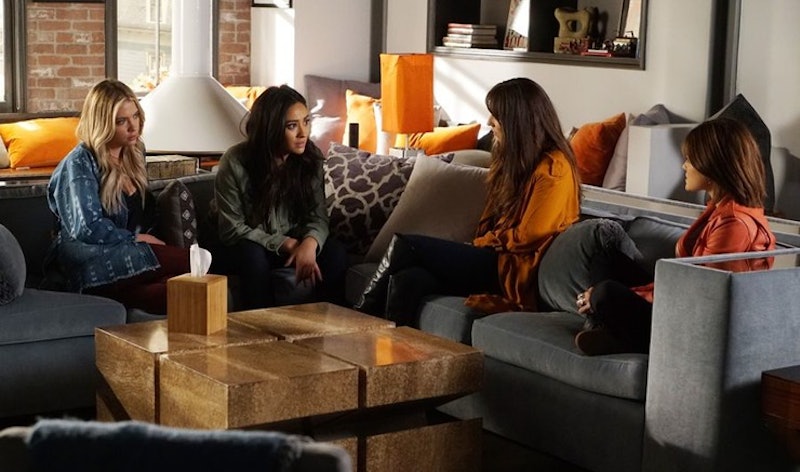 I know I say this after every single Pretty Little Liars finale, but my head is still spinning from the 7A conclusion — which, in true PLL form, left us with far more questions than answers. When the show returns, the stakes are a bit higher — the series' next installment will be its last, which means that I. Marlene King has a whole lot of explaining to do when Season 7B comes to our small screens in April. So, as the year comes to an end, let's recap the biggest Pretty Little Liars questions of 2016.

The season 7A finale was filled with a whole lot of action. In a twist that shocked no one, Aria learned that Nicole is still alive when she turned on the TV and saw Ezra making out with her. (Rough.) But, we received proof that true love is alive and well when we finally got that Haleb reunion we desperately needed. However, some deadly events put a damper on our happiness — Toby and Yvonne got in a car accident that may or may not have been fatal and, in the final moments of the finale, Spencer was shot. As if that wasn't dramatic enough, Mary Drake showed up and announced that she's Spencer's mom — but we're still not entirely convinced that's the full story.

So, let's recap the biggest Pretty Little Liars questions that need to be answered in 2017 — because it's I. Marlene King's last chance to give fans closure.

In an interview with Entertainment Weekly, King said that we wouldn't learn the identity of Mary's second child until Season 7B. So, what gives?

I wasn't sorry to see the last of Sara, but I'd still like to know who's responsible for her demise.

Aria is arguably the most suspicious Liar, and there must be a very good reason that her file conveniently went missing. I'd like to see a full copy of the file, please and thank you.

Is he hiding in plain sight? Could he be A.D.? We need answers.

Charlotte wasn't exactly the most beloved woman in Rosewood, so there's certainly no shortage of suspects — I'm partial to the theory that Ali killed her cousin, but it could be anyone.

Did A steal Emily's eggs just to mess with her head (a very real possibility), or does he or she have more sinister plans?

Elliott's officially six feet under, so who is the "he" threatening Ali and the Liars in that intriguing flash forward?

8. Is Bethany Ever Going To Become Relevant?

Seriously, what is the deal with Bethany Young? Did she really kill Toby's mom, or was that part of Charlotte's elaborate lie? Why did Jessica want Bethany to call her "Aunt Jessie"? Is there a good reason that we've never seen her face? You have so much explaining to do, Pretty Little Liars.

All signs point to yes, but we've been misled before. (Looking at you, Wren.)

11. What Was The Nature Of Charlotte & Mary's Relationship?

Mary claims the pair didn't even interact let alone work together, but that can't be entirely true... right?

I almost forgot — who will be unmasked as the ultimate villain, and what is his or her motive?

More like this
Every Horror Movie Reference In The 'PLL: Original Sin' Premiere
By Alyssa Lapid
The 'PLL: Original Sin' Creators Say A’s Identity Will Be “Very Clear” By The Season Finale
By Alyssa Lapid
Louise & Mercedes’ Relationship Is “A Little On And Off” After 'FBoy Island'
By Kadin Burnett
Everything To Know About 'Evil' Season 4
By Meguire Hennes
Get Even More From Bustle — Sign Up For The Newsletter