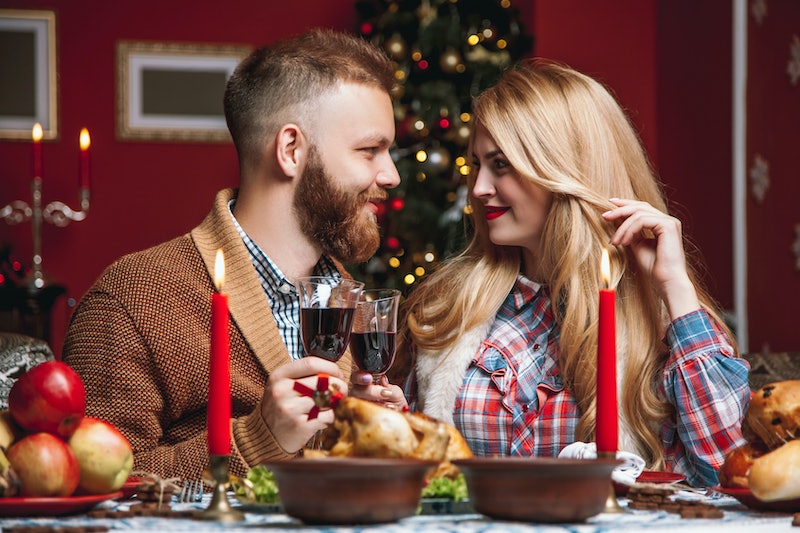 My associations with Christmas dinner don’t have anything to do with sex. I think of family, too much champagne, and stuffing my face until all I want to do is recline on the couch with my little brother and maybe drink more. Because the only one of those things that is even remotely sexy is champagne, it seems pretty obvious that Christmas dinner just doesn’t bring sex to mind. That’s why I was surprised to discover that so many of our traditional holiday foods are actually aphrodisiacs.

Crazy, right? From eggnog to lamb, it seems like our holiday staples should have us all jumping up from the table and running of to the bedrooms to get it on with our partners after dinner. But maybe it doesn’t work because, like me, most of you eat too much at Christmas dinner? Or because the effects of having family around counterattack the aphrodisiac effect of the food? (I can tell that for me, at least, being sandwiched between Grandma and my elementary-school aged god daughter definitely keeps my mind far away from sex.)

Here are nine traditional Christmas foods that are also aphrodisiacs, because these are the gifts that keep on giving.

Eggnog is made from eggs, milk, cream, honey, vanilla, and nutmeg — all of which are considered to be aphrodisiacs. Eggs are a sign of fertility and also said to boost the libido; ayurvedic medicine says that milk strengthens reproductive tissue; honey helps metabolize estrogen and may boost testosterone, both of which are important for sex drive; vanilla is considered to have a highly sensual smell; and nutmeg used to be used in India to treat low libido in men. So, basically, eggnog is the ultimate sex drink.

Lamb is a great source of carnitine, which has been shown to improve testosterone receptors and increase sperm count. Maybe stay away from this one if you’re not trying to make a baby?

A study from researchers at Santa Chiara Regional Hospital in Italy found that the more apples women eat, the more lubrication and and sexual function they have. And, OK, so this technically for apples, not apple cider, but what’s apple cider? Apple juice. So it totally counts.

Oysters aren’t traditional throughout the U.S. for Christmas, but they are in Virginia. They’re also probably the best known food aphrodisiac, with science proving it to be true in 2005, when researchers discovered that oysters actually contain rare amino acids that make us produce higher levels of the sex hormones testosterone and progesterone.

Marzipan is made from almond paste and almonds are a well-known aphrodisiac. They’re an ancient fertility symbol and some cultures even believed that the smell alone could get a woman hot and bothered. Traditional Indian medicine says that almonds boost sexual desire and Tim Ferris wrote in his book The Four Hour Body that he eats almonds to boost his sperm count and libido.

Chocolate is a classic — and it’s abundant at Christmas time. While scientists aren’t totally sure what, exactly, it is about chocolate that gets us going, some research suggests that it could be the fact that chocolate results in the brain releasing the “feel good” hormone serotonin. Regardless, it’s delicious and the cultural associations between chocolate and romance are probably enough to get people going on their own.

While women catch a lot of flak for loving pumpkin spice everything, apparently it’s the dudes who are secretly getting off on it. According to the director of Chicago’s Smell and Taste Treatment and Research Center, the smell of pumpkin pie increases penile blood flow by 40 percent. Who knew?

Red wine has been shown in studies to increase women’s sexual appetite, with even the smell alone being a turn-on. And there’s the fact that a couple of glasses of wine just makes you feel good, doesn’t it?

Ginger — one of the main ingredients in gingerbread and the one that gives it half of its name — increases blood flow throughout the body including, one would assume, in the genitals. So if you feel a little blush coming on after devouring your gingerbread man.

So there you have it: All of the ways your Christmas dinner could turn you on this year. Just try not think about when you’re sitting next to Grandma?