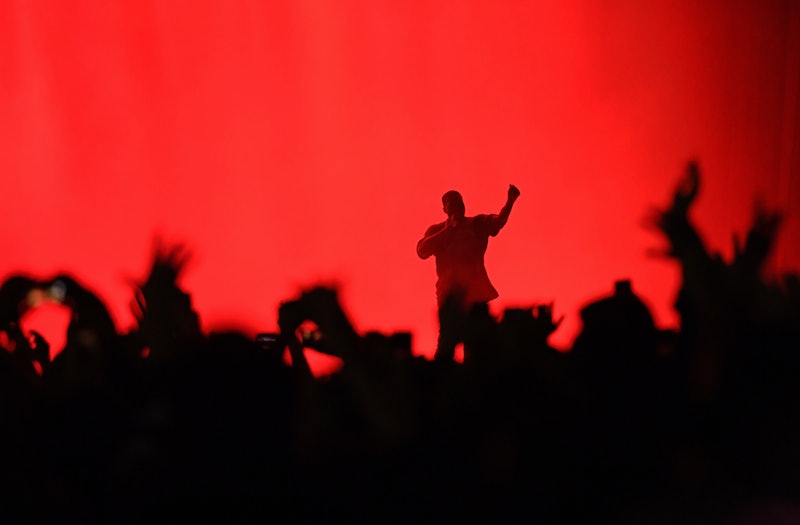 Just in case you haven't completely lost faith in 2016 yet, here's something to completely quash that hope. Early Tuesday morning, Kanye West was spotted in Trump Tower with his entourage on his way for a meeting with President-Elect... er, Donald Trump (sorry, it still hurts to say). I'll let you read that sentence one more time, and let this reality sink into you. After making jokes about both Trump and Yeezy someday occupying the White House, we actually have to sit here and wonder... is Kanye going to join Trump's administration?

I know, I can't believe this is a question that we have to confront in earnest before we've even had our coffee. It's like, having to ask, "Wait, is this the death of America?" before the second wake-up alarm on your iPhone even goes off. But, with an image and video of Kanye and his crew entering Trump tower for a meeting, there really can only be a few theories of what exactly is going on. Before we jump to the most incredulous one, it's important that we look at all the evidence from the past year or two to decode if this really is the end times.

The first theory is that Trump wants to take time out of his busy schedule to thank Kanye, in person, for all his support. Though Kanye himself didn’t vote this election, he made a very public declaration that he would’ve voted for Trump at San Jose stop on the Saint Pablo tour. Naturally, his stock took a hit among a chunk of his younger, liberal-minded fans. Trump possibly wanted to treat him for that sacrifice. Taco bowl?

The second and final theory is that we’re going to have Kanye take on some weird role in Trump’s Cabinet that he’s wildly unprepared for (on-brand for this administration). From there, Kanye can build his political resume so that he’s prepped to someday become Commander-in-Chief. Why can’t I stop nervously cackling at my computer screen right now...?

Now, even though it's crazy that any of this is happening, crazy that Kanye may eventually make good on his promise from the 2015 Video Music Awards, there could be a silver lining. Though nobody loves Kanye more than Kanye, it's possible his own loud-mouth obnoxiousness could be put to good use. After all, he isn't entirely opposed to justice for all. Remember his “George Bush doesn’t care about black people” days? Remember how Kanye recently pledged that he still believes in Black Lives Matter, women’s rights, and gay marriage? And remember how Kanye in the past has made sizable donations to both President Obama and Hillary Clinton’s campaigns, making this recent turn just that more confusing? ‘Member?

No matter how controversial of a figure Kanye is, he’s also an important influencer. If you're still holding onto that last tatter of optimism, getting Kanye in Trump’s corner could be good for the overall administration. That sitcom of a friendship could help Trump think of all the non-Christian straight white cisgender males in the country, which would be a tiny, tiny win.

Suffice it to say that, no matter what the meeting was about, this warrants a high eyebrow raise and some slight cause for concern. Then again, in a post-Trump world, does the premise of Kanye 2020 seem all that bad anymore?